The presidents of the Metis nations of Alberta (MNA), Saskatchewan (MNS) and Ontario (MNO) couldn’t have been happier signing their names to agreements that will recognize their right to govern themselves.

“I remember families that have yearned for this day to come,” said MNS President Glen McCallum. “And it’s here. Be happy today. Wear that big smile all day.”

“Really all of us are here today to celebrate this, this…I’m lost for words and that doesn’t happen very often,” added MNO President Margaret Froh. “But this is an absolutely amazing and momentous day.”

MNA President Audrey Poitras said the Metis in her province have been fighting for this day for 91 years.

“Finally, Canada recognizes our right to self-government,” she said. “I have always believed that once we get the recognition right, everything else will fall into place.”

(The Metis nations of Alberta, Saskatchewan and Ontario at the signing ceremony in Ottawa. Photo: Todd Lamirande/APTN)

But how it will benefit Metis individuals is not fully known yet.

Froh said today’s signing is an important first step towards recognition as a third order of government and to push forward on land claims.

“Whether it’s scrip or northwestern Saskatchewan land claims, or some of these community claims coming in Ontario, these agreements provide a process for us to actually start to move those (claims) forward.”

The Metis in Alberta do have a land base of eight settlements. But they were created by the province in 1938 and are governed by the Metis Settlements General Council (MSGC).

It’s not under the jurisdiction of the MNA and is not affected by today’s signing.

“That’s going to have to be an ongoing discussion of where do we go,” said Poitras. “How do we do now that we have the recognition that we so rightfully deserve. We in Alberta have some work to do as far as working with the MSGC.” 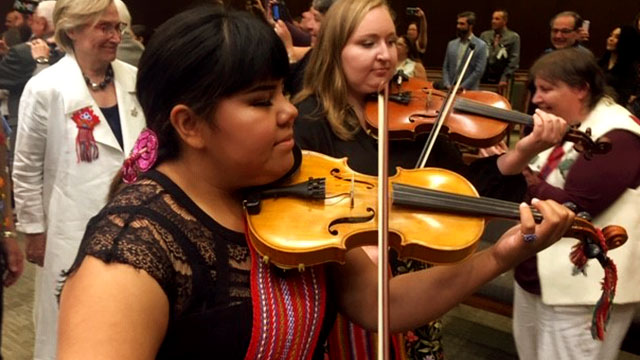 (Fiddlers at the ceremony in Ottawa Thursday. Photo: Todd Lamirande/APTN)

The real losers today could be those Metis groups in Eastern and Atlantic Canada that have been recently created in the wake of Supreme Court of Canada victories such as the Powley and Daniels decisions and who have been looking for the same constitutional rights as Metis in Western Canada.

Crown Indigenous Relations Minister Carolyn Bennett made it clear she believes some of those Metis groups have disturbing backgrounds.

“Some of the research is showing that people misunderstand what capital “M” Metis are,” she said. “This is not just being able to show that you had a great, great grandmother somewhere that was Indigenous.”

That remark was met with applause by the dozens of people present for the signing.

The Manitoba Metis Federation and the Metis Nation of British Columbia were absent and it’s not yet known when they wills sign their own agreements.

But McCallum was there to celebrate how he feels his province is now fully a part of Canada.

“And that as we move forward, everybody gets to win.”