In 2018, Virginia Cook discovered where her mother was buried, 55 years after she passed away.

Now, she wants to spread awareness on what she went through to help others going through a similar situation.

“When I found my mom’s grave I wanted to do something because there was no grave, nothing.  Just a marker to ID her,” says Cook. 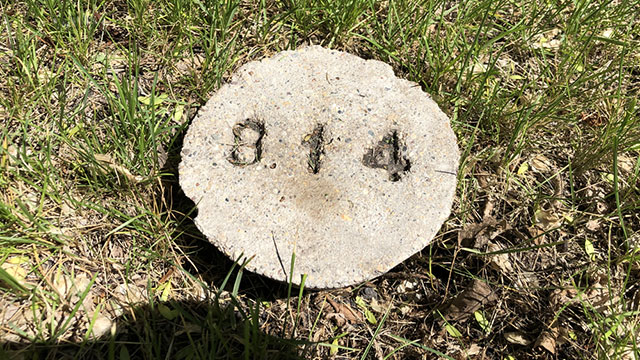 (Virginia Cook’s mother’s grave was simply a marker. “At first I couldn’t find her marker” she says. Photo: Ashley Brandson/APTN)

She explains both of her parents were residential school survivors, an experience she felt they never fully recovered from.

“They had alcohol addiction.  We did have a house in Shoal Lake, Ontario, but we didn’t stay there because they wanted to be close to alcohol, which is in Kenora, Ontario.”

Cook says she was 11 years old when her and her two younger sisters were first taken by children’s aide – which is known today as CFS.

She remembers returning home twice, but ended up in children’s aide for good by age 13, in 1961.

This was the last year she saw or spoke to her mother.

Two years later in 1963, a social worker told a 15 year old Cook her mom had passed away.

At the time, Cook was living in Ignace, Ont. with her foster parents.

She remembers the social worker took her to Sioux Lookout, Ontario, to visit one of her younger sisters.

Cook told her sister that their mother was gone.

“She must have lost the thought of our parents because she said, ‘No, my mom is here, my mom is sitting right there,’ pointing at her foster mother.” 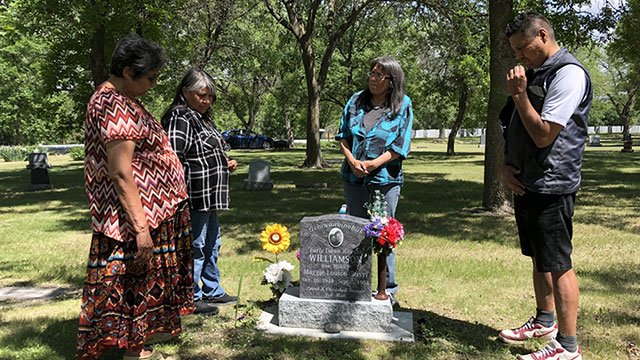 As Cook and her siblings aged out of care, they always wondered where their mother was buried.

“We always knew her as Louisa Williamson and that’s what we were looking for, under that name.”

Cook explains they would try to find their mother on and off throughout the years, but had no luck.

Years later, Cook began the process to receive old age pension, she found out she needed to apply for her long form birth certificate to complete the process.

When she received her birth certificate she noticed something.

“On my birth certificate, it says Maggie Louise Williamson, so that’s how the search came up,” says Cook.

She googles her mother’s given name and it led her to Brookside Cemetery.

With the help of workers from the cemetery, she was able to find the area where her mom was buried.

“At first I couldn’t find her marker, I asked for help and a worker had to come and dig it out of the ground, then there she was number 814.” 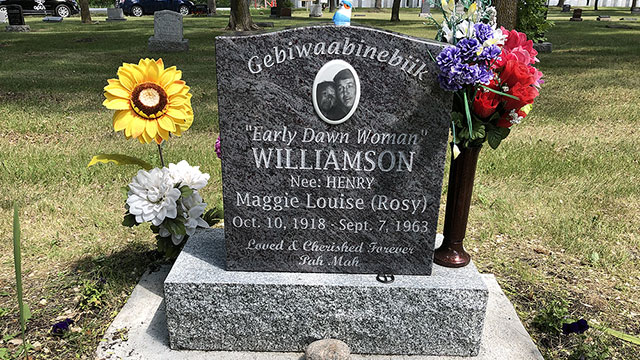 Cook says she wanted a bit more confirmation, and after many phone calls, it was determined number 814 was her mother, Maggie Louise Williamson.

“It kind of hit how she must have been buried, being alone and all.  I just wanted to honour her in anyway that I can.”

In May 2019, Cook and her family saved up enough money to put a headstone at her grave site, just in time for Mother’s Day.

Cook believes people were put on her path for a reason, and is grateful for all that helped on her journey in finding her mom.

“I know we’re not the only family that’s gone through something like this,” says Cook.

“There are many children that were apprehended and still are getting apprehended, who don’t know where their parents are.

“So sharing this story could maybe give someone hope and a bit of light.”