Parents of a two-week-old baby who was apprehended shortly after her birth were preparing Wednesday evening to argue their case in court the next day when they were informed social workers were coming to their home to return the infant.

The paternal grandfather said social workers showed up at the couple’s apartment and told them if they could get one of their mothers to come stay with them, they could have the baby for the night.

While the first-time parents, both in their 30s, have argued they don’t need parental supervision to parent their infant, they complied with the demand and had the dad’s mother come stay the night.

They arrived at Williams Lake court with the baby Thursday morning for a hearing on the fate of their child who was seized at two days old from the Kamloops Royal inland Hospital after medical staff reported the mom was neglecting the baby 90 minutes after she had a C-section.

The family waited in court for four hours with the infant before they appeared before a judge.

“The judge was not happy with (the Ministry of Children and Family Development) for the almost three week delay,” said Baby H’s paternal grandfather. “The future is still up in the air, more meetings to get (the baby’s father) to work with instead of against them.”

The couple has been ordered to live with Baby H and her paternal grandfather. 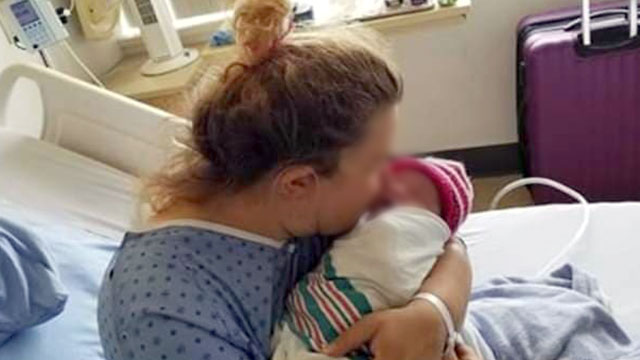 Social workers had initially tried to take the baby 90 minutes after she was delivered on June 12 but the baby’s maternal grandmother held them off. They came back to the hospital two days later for a meeting with the family, which someone recorded.

APTN News obtained the recording. In it, Baby H’s shell-shocked dad is heard telling a social worker,“I still see no reason why (mom) and I aren’t capable of loving our child and taking care of her.”

The worker replied, “I don’t think anyone is saying you’re not capable of loving (Baby H). Everyone’s concerned about baby being cared for and her immediate basic needs being met and we don’t have time to assess that.”

Instead of taking that time to assess, the agency deemed the child as being at a high risk for injury or death and that declaration alone is enough to seize an infant that day, June 14..

The worker on the recording went on to say that in the first 48 hours of the baby’s life “numerous” medical staff made notes that the baby was being neglected. That’s why they showed up when the baby was 90 minutes old.

The family said the mom wasn’t responding to the baby’s cues because she was exhausted and either sleeping or sedated – not uncommon within 48 hours of having a C-section.

In the recording, the social worker admonishes the father saying, “(Mom) can’t even be roused for this meeting because she’s so out of it.” The baby’s dad replied incredulously, “Yeah, from the prescription medication she was given from her doctor.”

The social worker advised the distraught father that, “We’re not going to change our decision. Time will change our decision, how you interact with support services outside the hospital and engage in child-centered services. So learning about child-centered cues and learning what it looks like to be a parent, I think, we need to see you demonstrate that in the services before we’d consider allowing the baby to be returned to your care.”

The parents and their families have been fighting ever since to have the baby returned. They were given four, two-hour supervised visits up until Thursday night when the infant was abruptly returned to their care.

Ministry of Children and Family Development workers told the parents earlier this week they’d consider returning the baby if they’d move in with one of the baby’s grandmothers. The court granted them the baby on this condition and the family is now making arrangements to move.

The baby’s dad says there’s no reason he and the mother need to live with one of their parents nor do they need to “learn what it looks like to be a parent” as a social worker is heard telling him on the recording, but they’ve agreed to all demands.

APTN requested an interview with B.C.’s Minister of Children and Family Development Katrine Conroy regarding the state of social services in the province but was told she was unavailable Thursday.

In an emailed statement, her ministry said, “By law, the ministry can only remove if the child is in immediate danger and no less disruptive measures are available.”

The family has not been made aware of any evidence their child was in danger.

The ministry also said they’re focused on “balancing the safety of a child or infant and keeping kids with families or extended family” but the baby was apprehended at the hospital and placed in a non-Indigenous foster home – not with family.

Baby H is 15 days old today. She missed 13 days of bonding with her parents while in strangers’ care.

Meanwhile, a B.C. legal aid organization is interested in working with the family to determine if there was a human rights violation.

“There is a hugely disproportionate number of Indigenous children being removed from their families by the Ministry of Children and Family Development,” said Amita Vulimiri, a lawyer with the Community Legal Aid Society in Vancouver.

“We are interested in exploring this issue through the lens of human rights: the B.C. Human Rights Code prohibits discrimination on the basis of specified grounds, including race, colour, ancestry and place of origin.

“If there is evidence that the Ministry is making decisions to remove children because they are Indigenous, this could support a claim for discrimination, pursuant to the Human Rights Code,” she added.