Aitken has been to this hockey camp for the past few years in hopes to one day play in the NHL for his favorite team, the Edmonton Oilers.

“It’s a lot of work. It takes a lot of time,” Aitken says. “You got to show up for practice on time. You actually have to try to work hard so you can get like this.”

(Ryan Aitken takes these camps as opportunities to build his skills so that one day he can play for the Edmonton Oilers. Photo: Chris MacIntyre/APTN)

It’s almost noon and the rink is full of blue and yellow jerseys and players skating back and forth passing pucks and taking shots.

Amongst all the noise, directions from the coaches can be heard loud and clear. 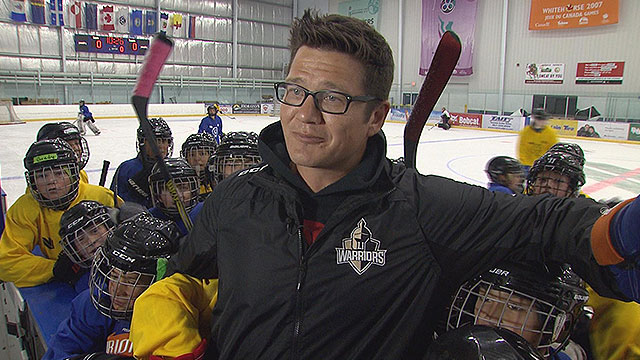 (Aaron Asham is surrounded by a group of happy but tired players on day 3 of the Learn to Lead hockey camp. Photo: Luke Smith/APTN)

The coaches at this years hockey camp are Arron Asham, Wacey Rabbit and Brandon Montour.

Asham, a retired former professional hockey player who played for 15 seasons with six different teams including the Montreal Canadiens, and with Sidney Crosby and the Pittsburgh Penguins.

Wacey Rabbit plays with the Jacksonville Icemen, but has traveled all over the world playing hockey, and Brandon Montour, a defenseman for the Buffalo Sabres.

There are 117 players in total at the five day camp that is put on annually by the Yukon First Nation Hockey Association. 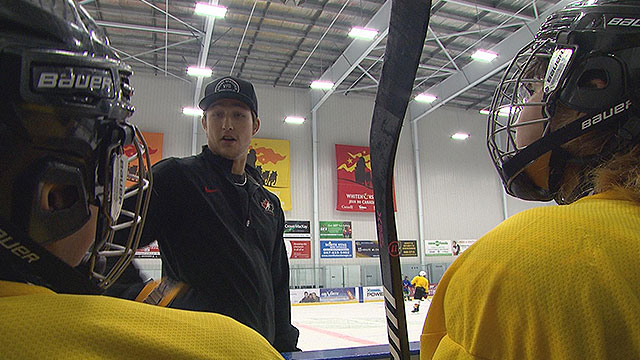 (Buffalo Sabres defenseman Brandon Montour talks to players before they head out on to the ice ( Photo: Luke Smith/APTN)

The Association was created in the 70’s to provide opportunities for players to compete with other provinces and territories.

Players at this years camp have come from as far as Smithers, B.C.

On day three of the camp, players were already starting to feel the affects of the training.

Asham explained that although it’s a time for fun, it’s not easy.

“We run them through drills trying to teach the proper ways how to stick handle, proper way how to take a stride,” he said.

“Everyone seems to be having a good time. A lot of tired kids”

Rabbit believes that skills off the ice are just as important as skills on the ice.

“Some of the kids can’t skate and by Friday they are ripping around. So that’s just confidence building and they bring that in to everyday life,” said Rabbit. 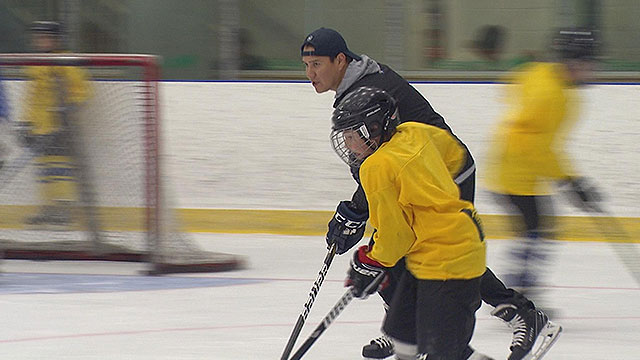 Montour was only at the camp for one day so he took every chance he could to interact with players on the ice and off the ice.

As a current player in the NHL he had tons of great advice to give players.

He was happy to be able to give back to community and he was excited to see so many kids.

“I hope some kids here want to strive to be in the NHL or play competitive hockey” he adds “learn from us and you know, what we have to say and take even if its just

With the end of the five days nearing, players are starting to skate faster, shoot harder and laugh louder.

Ryan Aitken is excited to go home but can’t wait to tie his skates up and come back next July. Before he hits the ice he had just enough time to give his own piece of advice.

Family of Dale Culver says ‘he should never have died’...