Allegations continue to mount against Indigenous leaders as more women go public as part of the #MeToo movement.

It has people talking about a culture they say needs more safeguards.

Dumas denied he did anything wrong, and claimed his phone was ‘spoofed’ by unnamed political opponents.

He has not responded to numerous requests to be interviewed.

Other women came forward with evidence that Dumas has a pattern of sending texts. 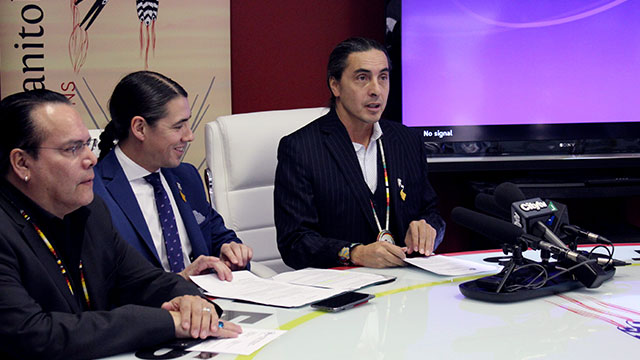 (Arlen Dumas (far right) went on a leave of absence after he was accused of sending inappropriate texts. APTN file)

But some Manitoba chiefs issued statements on social media that the women were lying or believed someone other than Dumas sent the messages using hacking software.

Then AMC Women’s Council dropped an investigation into the claims.

However, the movement continued to gather steam this week at the Assembly of First Nations (AFN) annual general meeting in Fredericton, N.B.

On Tuesday, Chief Perry Bellegarde announced an attempt to suspend Chief Morley Googoo in Nova Scotia after an independent report determined he had bullied, harassed and discriminated against women.

Googoo has 20 days to respond.

Cheryl Maloney, who couldn’t be reached for comment, claims she resigned as president of the N. S. Native Women’s Association because of the alleged attacks over a period of years.

She was shocked the AFN took action. (Cheryl Maloney alleges she was driven out of her job by harassment from a chief. APTN file)

“I’m surprised that anyone is addressing it,” she told local reporters. “I guess because of the media coverage people have to address it now.”

Women like Maloney say they experienced abusive backlash after they complained.

“Be careful,” she tweeted this week. “I was threatened many times for knowing too much and there is no help or safety plan … No legal services.”

Another chief, Allan Polchies Jr., also in the Maritimes, is charged with one count of assault and one count of sexual assault.

AFN removed him from the opening ceremonies because of its zero tolerance policy towards sexual assault allegations.

He says he accepted a deal from the Crown prosecutor’s office, which could result in dropped charges if offenders undertake intervention efforts.

The alleged victim in that case is not being identified by name but is a member of a First Nation.

It’s on social media where discussion continues about harassment and sexual harassment. 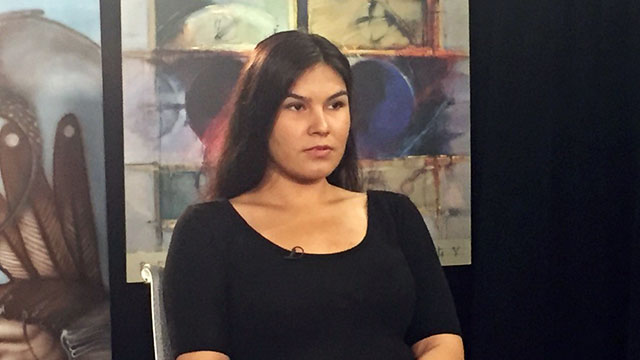 That has the two women who first raised concerns about texts from Dumas – Bethany Maytwayashing and Renée Yetman – pondering what needs to change inside Indigenous culture.

They plan to attend a meeting in Winnipeg scheduled for Thursday to help develop a code of conduct and harassment policy hosted by Manitoba Moon Voices Inc.

The group, which is the regional chapter of the Native Womens’ Association of Canada, says it’s time to address inappropriate texting and messages on Facebook – “especially from those in positions of power.”

They want to make it clear this type of communication is causing harm, said spokesperson Sandra DeLaronde.

And find a way to hold individuals and organizations accountable while supporting or finding support for women and two-spirited people who come forward.

“In the Calls to Justice from the National Inquiry (into Missing and Murdered Indigenous Women and Girls) there are things governments can do – as well as Indigenous governments,” DeLaronde said in an interview.

“We need a mechanism so (people who are disclosing) can feel safe and know something will be done.”

She noted her group is seeking clarification on whether AMC represents only chiefs or the members of Manitoba’s 62 First Nations through the elected chiefs.

And, if so, what the legal and other obligations are when allegations are made.