A new dining experience has popped up in Winnipeg – literally.

The Ishkode Indigenous Cuisine Pop-Up is a five-night celebration of the First Peoples’ food with the goal of putting a modern twist on traditional eats.

“It’s trying to restart what was lost. What would Indigenous food today be?” said Steven Watson, one of three Indigenous chefs tasked with creating the seven-course meal.

Ishkode, which means “fire” in Ojibwa, was created with the intention to develop a meal using ingredients only available pre-colonization.

Watson is a culinary instructor at Commonwealth College in Winnipeg.

He has two decades of experience working in the city’s food industry. Part of his work at the college is exploring what Indigenous food culture could have been had colonization destroyed traditions. 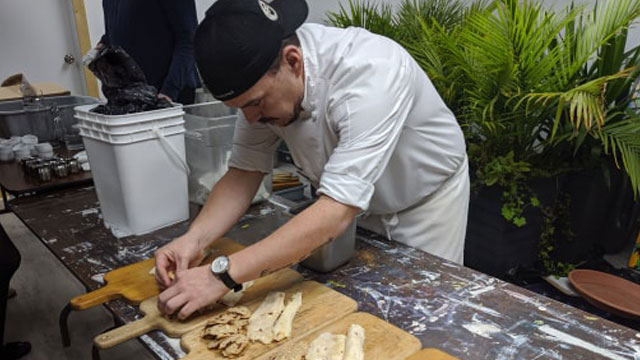 “This is what I feel it would be if we had 500 years of food development and culture,” said Watson.

“Hopefully, with events like this, we can develop a bit of that food culture, as well.”

Henderson, more commonly known as Cookem Daisey’s, is famous in the city for her bannock or frybread.

But guests won’t see any of that during the meal because the Indigenous staple was actually brought over by Europeans – a fact many aren’t aware of. 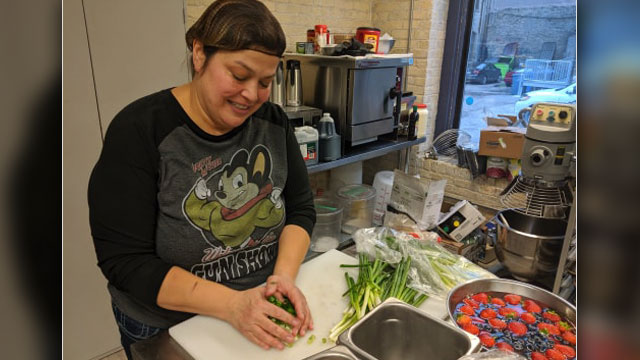 Winnipeg chef Glenna Henderson is famous for her bannock or frybread (Brittany Hobson/APTN).

Henderson hopes to introduce attendees to what is traditionally considered Indigenous foods.

“There was a society here, there was food happening and that’s the things that people need to remember,” she said.

Some of the things on the menu include: whitefish with a cranberry and onion jam, bison prepared two ways, a cornmeal-based taco shell, bone broth soup, and wild rice popcorn candied with maple syrup and berry compote.

Ishkode is not just about the food alone – it’s about the experience and what these dishes mean to Indigenous peoples.

“There’s nourishment in [food], there’s life in it. There’s ways to share those kind of things and ensure that we represent ourselves in a way that proves how beautiful our culture and our people are,” said Henderson. 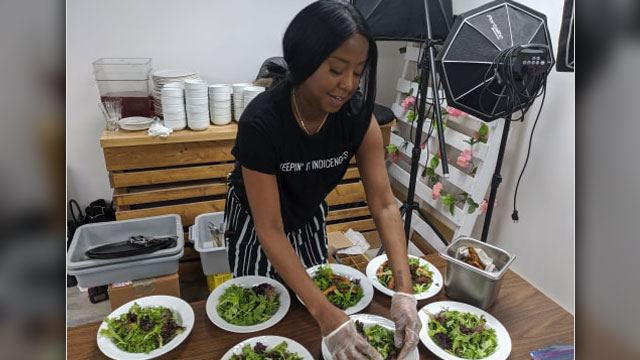 Melissa Brown uses food from her Ojibwa and Jamaican cultures in her cooking career (Brittany Hobson/APTN).

Being part of the event is a new experience in more ways than one.

Brown is the owner of Brownees Urban Bistro, a self-run catering business. She also uses her skills to help youth aging out of care.

When cooking, it’s often just Brown working by herself.

This was the first time she had a full team of support – something she says helped “take the load off.”

Brown is Ojibwa and Jamaican. She brings both of these cultures into her creations.

One of her dishes is jerk chicken with a sweet sauce made out of pineapples and mangoes.

Brown started cooking professionally only a few years ago after pursuing an education in psychology and sociology. After years of going to school, Brown needed to take a break – cooking was that respite.

She says the Indigenous food sovereignty movement is putting traditional dishes on the map.

“That has been happening for the past two or three years and chefs are popping up all over just highlighting our foods before colonialism,” said Brown.

“That’s definitely a movement I’m trying to be a part of.”