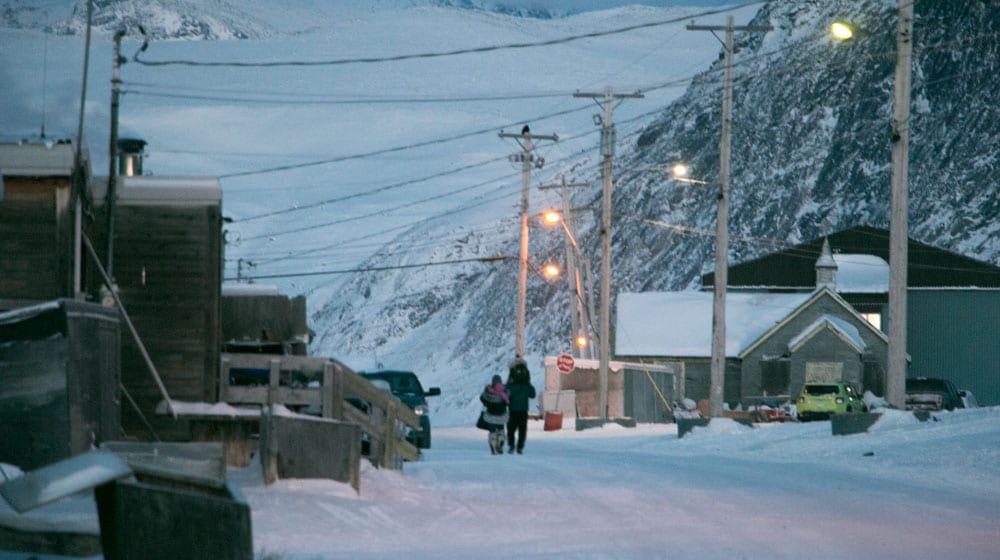 (Pangnirtung, Nunavut is nestled in the snow-capped South Baffin mountain range on Baffin Island. Residents are shaded by the landscape and do not receive direct sunlight from Nov. to Feb. Charlotte Morritt-Jacobs/APTN)

APTN News is taking a look at Nunavut at 20. The successes and the challenges. Come back each day this week for a new story and pictures from Canada’s largest territory.

Peter Ittinuar is looking for somebody to call out the people of Nunavut.

“My hope is that somebody on April 1, someone will give a speech that is honest, to the point, and people may not be happy about it but it’s got to be said.”

As the Inuit homeland he helped carve out of Northwest Territories turns 20 Monday, the elder politician despairs at some of what he sees.

“What am I hoping for? A Jesus Christ, a Napoleon, a Mahatma Ghandi. Mandela. A young Mandela. That’s what I’m dreaming up,” he says. 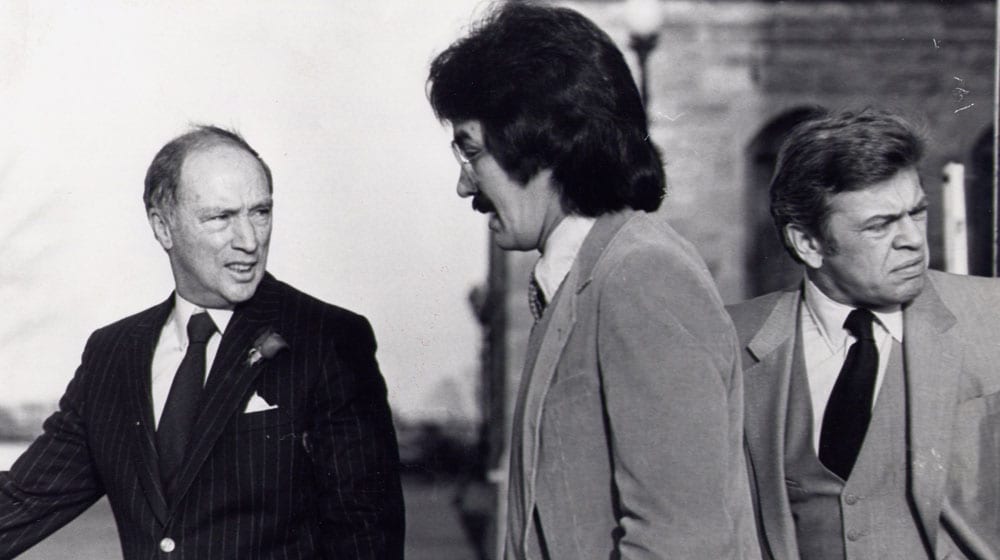 (Peter Ittinuar, centre, was the first Inuk elected to Parliament. He was a member of the NDP but crossed the floor to join the Pierre Trudeau Liberals in 1982.)

“Maybe it could have been Sandra Inutiq.”

Inutiq, who wouldn’t comment for this story, has fallen silent since posting her Facebook manifesto, “Dear Qallunaat (white people).”

The lawyer lists 21 ways she thinks non-Inuit keep the Inuit majority down.

“I have thought a lot about the level of damage having a highly transient, mostly white population does to Nunavut,” she writes.

“The indifference to social conditions, the policy inertia and all the collective micro-aggressions that maintain an impoverished Inuit population.”

Inuit make up 85 per cent of the population of Nunavut and are supposed to be in charge and on top.

Instead, the lives of 35,000 people are plagued by serious social problems stemming largely from unemployment and lack of housing.

Ittinuar, who is known as one of the “Experimental Eskimos,” one of a handful of children from the north, some taken from their homes without their parent’s consent by the federal government in a social experiment in the 1950s, isn’t convinced the effects of colonialism are only to blame.

“We’ve got to address our own people as well. Nobody is doing that,” he said.

Ittinuar works as a senior negotiator in the Ontario government.

“Someone has to step forward who is unafraid of the next election, unafraid of saying to the people…‘Get the f*ck up. Get off your f*ckin’ ass, go down to the adult education centre. Train in a trade,’” he says.

Like a grandparent concerned about the future of his young charge, Ittinuar’s well-meaning advice will likely be ignored.

“There will be limited interest in what Peter has to say,” notes Jack Hicks, a former non-Inuk bureaucrat who helped create the Nunavut government. 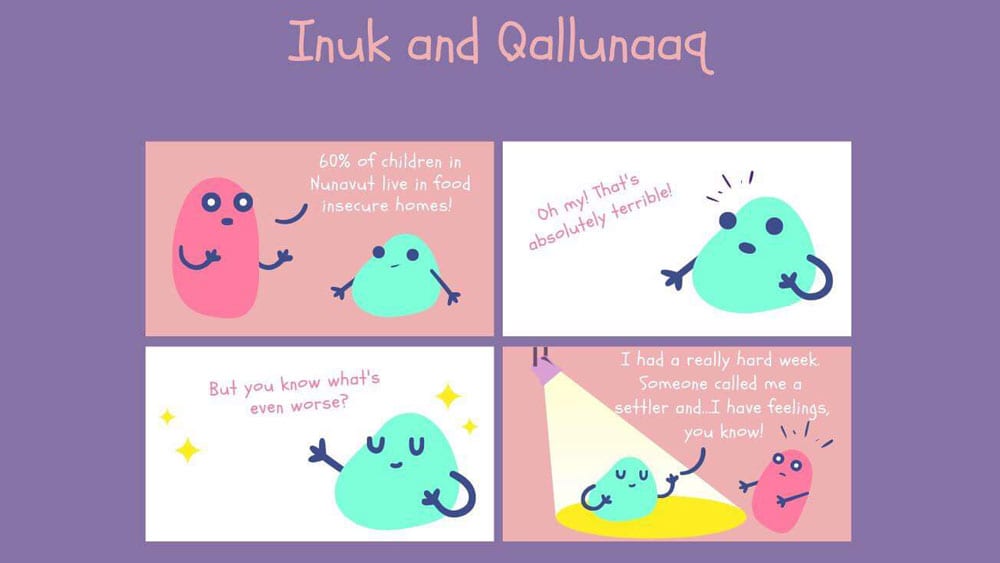 (This internet meme pokes fun at the communication gap between Qallunaat (white people) and Inuit. Facebook)

Hicks shares details about those heady, early days in the book Made in Nunavut: An Experiment in Decentralized Government.

“It’s not just how has the Nunavut government done but how have the federal government treated Nunavut as an institution,” he says of the past 20 years.

“Has the creation of Nunavut impacted on how the feds view the lives of Inuit?”

But it hasn’t translated into the tax base needed to fund infrastructure and lift the majority out of poverty.

“Canada has always governed the Arctic on the cheap,” says Hicks. “Maybe one day it will be a more economically viable place.”

Nunavut, which means ‘our land’ in Inuktitut, is Canada’s largest territory with a land mass equal to that of western Europe.

A bird’s eye view sees 25 communities scattered across the tundra, accessible by air only.

Goods are flown in but can reach coastal communities by ship – at high cost passed on to consumers.

These are dire symptoms that show the people are struggling.

And it’s fertile ground for artist Jesse Tungilik, who used grocery receipts from the Northmart and Northern stores to sculpt a hunter with seal for a recent exhibition in Montreal.

“Without hands I wanted to convey the disconnection between Inuit and their traditional subsistence hunting culture today, which we’ve been forced into the capitalistic wage society where we’re forced to make money and pay bills,” he says.

And the lack of facial features shows the loss of cultural identity, he says.

“Growing up as one of the first generations to live a modern, contemporary, Canadian life, I’ve experienced a lot of confusion around cultural identity, trying to figure out where this generation fits in.”

Splitting off from NWT was meant to preserve Inuit culture and language and promote Inuit employment. 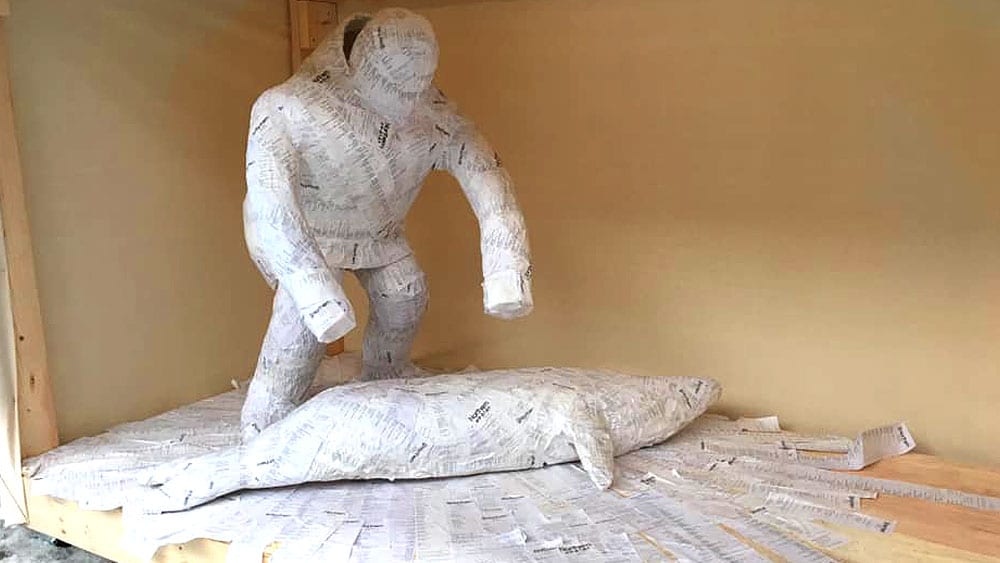 But Tungilik says the dream has become distorted.

“The idea, the concept of Nunavut, is still relevant and important,” says the artist who is based in Iqaluit.

“My disagreements and criticisms are more along the lines of how things have been implemented within the government of Nunavut.”

“A lot of the ways they’ve been doing that for the past 20 years has been really superficial, as I said, and it feels very patronizing to me. One of the major failings of the government of Nunavut is the failure to really empower Inuit to make decisions.”

Inuit pride themselves on being able to survive anything.

Tungilik, who has worked in various government roles before becoming a full-time artist, says that resilience is worthy of more attention and compassion.

“Inuit really need to become a lot more – I won’t say aggressive – insistent that our voices are heard,” he says.

“Canada colonized us and has spent a tremendous amount of energy and resources assimilating us culturally. A lot of Inuit have internalized a lot of that and it’s really destructive.”

Ittinuar agrees. But he believes after two decades, Nunavummiut should be more mature.

“Older Inuit have a horrible, horrible psychological habit of ridiculing young people who don’t know their Inukness or their language or their culture,” he says.

“So young people go, ‘Well, fuck you. I’m turning to TV for my education or the internet.’”

He wonders why things went so wrong.

“I’m 69. I’m able to look well back before when Inuit were self sufficient, hard working, didn’t drink much, if at all. Got up in the morning, had family that were equal to the ability to sustain them through employment and hunting and fishing and trapping, and maybe some wage employment,” he says.

“I saw very happy people then. I saw people who were extremely proficient and rich in their language, their outlook on the world was pretty happy, and now I see a downtrodden people.” 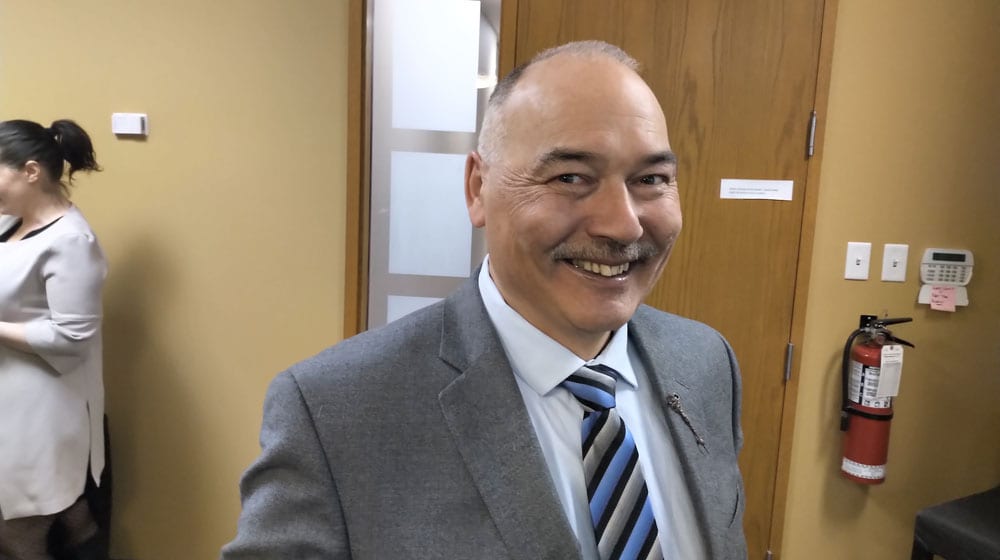 (“I believe that things are better than they were in 1999,” says Nunavut Premier Joe Savikataaq. APTN file)

Nunavut Premier Joe Savikataaq is more, well, political is sharing what he sees as successes.

“Inuit employment within the government has pretty well doubled. The number of public housing units we’ve made for Nunavummiut is close to 1,900. Our graduation rates are up. Our GDP is up. And we have four operating mines now that hire Inuit. I believe that things are better than they were in 1999,” he says.

Encouraging Inuit to get better educated.

“It’s not a money issue,” he says. “We have to get more role models to show people the value in education and training. Because if you have a job and your standard of living goes up, then generally everything is a lot more positive.”

“It could maybe still work but hopes are dimming all the time,” he says. “We did not count on the Inuit not taking advantage of what was given to them.

“Now we’re starting to have immigration from the Philippines and the Middle Eastern countries. They’re taking up jobs that Inuit are too lazy to take up. It’s unfortunate.” 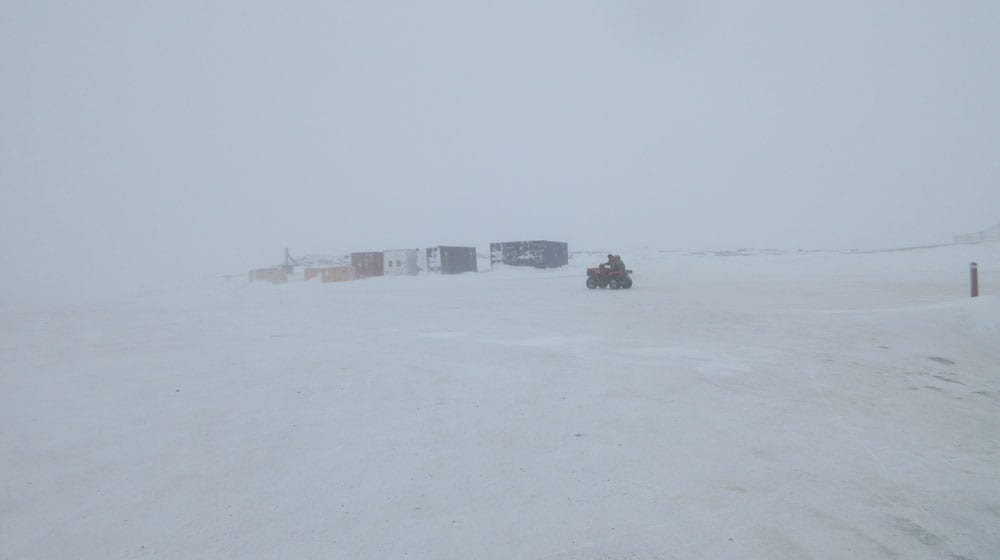 Hicks says steering the future is up to new younger faces now. Such as those graduating from Nunavut Sivuniksavut – a kind of societal and political finishing school in Ottawa.

He expects them to point the finger squarely at the federal government and ask: “How long are they willing to let generations of Inuit live in profound poverty?”

Hicks says the new crop of politicians will try to consolidate the dream.

“It was sold to people – the pitch was – very much about a more Inuit government, but what about the living conditions?”

Ittinuar suggests remaining under Yellowknife’s thumb was not an option.

And, he says, the feds would be funding the North anyhow – with or without Nunavut.

“The schools, the houses, the public housing, all of that infrastructure would still be in there under a different name,” he says.