A B.C. judge has reserved her decision on whether to grant an injunction against members of a Wet’suwet’en clan so the $40-billion LNG Canada project can proceed.

“She asked for an argument against an injunction,” Naziel said Thursday after attending the first day of the court hearing.

“Our lawyer stated that it is a constitutional issue which affects the outcome of the Delgamuukw decision.”

Delganuukw was a 1984 case launched by leaders of the Wet’suwet’en and Gitxsan First Nations, who took the provincial government to court to establish jurisdiction over land and water in northwest B.C.

Now they are relying on Delgamuukw again, said Naziel who is named with his partner Freda Huson in the injunction and civil suit filed by TransCanada subsidiary Coastal GasLink.

“We are trying to decolonize something that offers a privileged lifestyle to so many settlers,” he added in an interview.

The Unist’ot’en house of the Wet’suwet’en clan system built the camp to offer addiction treatment and assert jurisdiction on land they say they were displaced from. 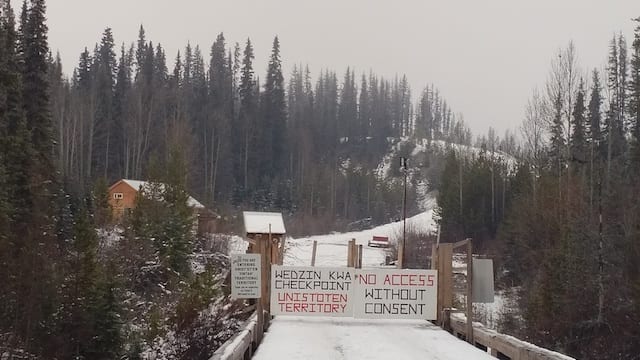 It has also served to keep development away.

“The Unist’ot’en Camp is not a blockade, a protest or a demonstration,” the camp said on its Facebook page, “it is a permanent, non-violent occupation of Unist’ot’en territory, established to protect our homelands from illegal industrial encroachments and to preserve a space for our community to heal from the violence of colonization.”

At least until now.

“A delayed decision is often a good sign,” Naziel said, noting all the hereditary chiefs were in court to lend their support.

Coastal GasLink wants access to the Morice River bridge its said in a statement to APTN News, to get to the site of its pipeline one kilometre away from the camp for fieldwork.

It is also claiming general, exemplary and punitive damages, costs and interest.

It said in a release the legal action was “a last resort” after years of “attempting the engage the blockade” to reach a solution.

“The Coastal GasLink team would like to thank each of the local communities and the First Nations groups along our pipeline route for their continued support through this process, including the elected band chiefs, their councils and the Wet’suwet’en hereditary chiefs who do support our pipeline,” the company said in a statement.

But the camp said in a statement the injunction application and civil suit “aims to criminalize Unist’ot’en Camp and forcibly facilitate pipeline construction across unceded Unist’ot’en territory.”