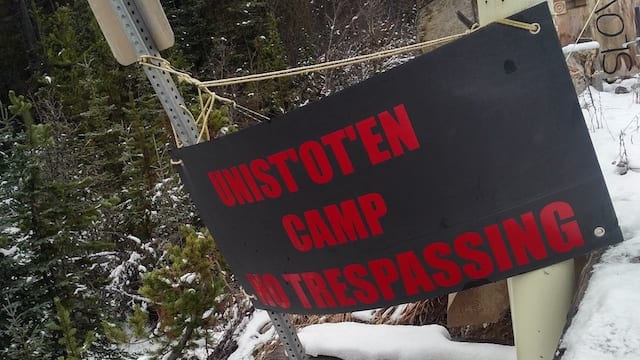 Members of the Wet’suwet’en Nation expect a judge to rule in an energy company’s favour Thursday in Prince George, B.C.

“It’s a $40 billion project,” said John Ridsdale, one of five hereditary chiefs. “We know the province, Canada, want it to go ahead.”

Huson and Naziel are named in a civil suit and injunction filed by TransCanada subsidiary Coastal GasLink.

The company alleges the couple has blocked a bridge it needs to cross to access a work site one kilometre from the camp.

The bridge leads to a healing centre the couple operate on their clan’s traditional territory near the proposed pipeline route.

He said the hereditary chiefs requested a meeting with the local RCMP detachment to understand what will happen if the injunction is granted.

The Mounties said the company can call in police if there is a problem.

“The company can come (on the property) in 48 hours,” Ridsdale said.

“We won’t break any (of their) laws or impede what they’re doing.”

It means the locked gate operated by the camp on the bridge will be dismantled by the province, he said the RCMP told them.