To the federal government and some provinces, hydro dams represent a pathway from fossil fuels and toward a lower-carbon future.

But to Indigenous communities whose waterways have been dammed, ways of life disrupted and residents displaced, big hydro represents a form of colonialism.

Monias was one of several people who travelled to Ottawa to deliver a message about large hydro dams to federal decision-makers on Monday.

They talked about documented reports of violence against women linked to the Keeyask dam in northern Manitoba, to the imminent risk of contamination of traditional foods downstream of Muskrat Falls in Labrador, to the alleged lack of consultations with First Nations impacted by Site C in northeastern B.C.

Carol Kobliski of Nisichawayasihk Cree Nation said despite her community’s stake in the Wuskwatim dam in northern Manitoba, the social problems in her community have worsened.

“We are all impacted by social and economic problems in our community,” she told a small crowd gathered for a protest outside an international conference of large hydro dams in Ottawa Monday. “The same thing is happening in every community that has dams, and it’s growing.

Amy Norman, a Nunatsiavummiuk land protector from Labrador who has faced charges related to her resistance of the nearly $13 billion Muskrat Falls dam in Labrador, said the provincial and federal governments are “wilfully poisoning us.”

An Indigenous-led occupation of the Muskrat Falls project site in 2016 prompted Newfoundland and Labrador Premier Dwight Ball to strike an agreement with Indigenous leaders from the province to form an Independent Expert Advisory Committee (IEAC).

The committee studied projections that flooding of the dam’s reservoir would lead to the exposure of downstream communities to unsafe levels of the neurotoxin methylmercury.

A team of researchers out of Harvard University published a study earlier in 2016 that concluded exposure to methylmercury would on average double for residents of downstream communities who eat traditional foods like fish, seal and birds.

The study also found that unless proper mitigation measures are undertaken—such as removal of topsoil from dam reservoirs prior to flooding—a number of other projects across Canada could generate greater amounts of methylmercury than Muskrat Falls.

“Without such mitigation strategies, our analysis shows hydroelectric development will have a disproportionate impact on Indigenous communities, affecting long-term neurocognitive function in children and with potential population level impacts on endocrine and cardiovascular health,” the report stated.

The Newfoundland and Labrador IEAC released its report and recommendations to government in April 2018.

Last week, concluding his visit to Canada, United Nations Special Rapporteur for Human Rights and Hazardous Substances Baskut Tuncak announced he had found “Indigenous peoples are disproportionately impacted by the toxic byproducts, the hazardous substances and wastes that are used, produced and released by economic actors.”

In a written statement of observation, Tuncak specifically referred to Muskrat Falls.

After hearing from residents of hydro-impacted communities, he called on Canada to “use its leverage as the largest investor in [Muskrat Falls] to review whether [UN Declaration on the Rights of Indigenous Peoples] compatible procedures were followed for all affected indigenous peoples, and to prevent the release of methyl mercury.”

Both Conservative and Liberal governments, despite concerns over risks posed by methylmercury to human health and Indigenous peoples’ way of life, provided Newfoundland and Labrador with a combined $9.2 billion in federal loan guarantees to ensure the project’s completion.

At a press conference on Parliament Hill Monday morning protest organizer Matthew Behrens of the Ontario Muskrat Solidarity Committee called out federal Environment and Climate Change Minister Catherine McKenna, who he says his group has been seeking answers from on Muskrat Falls for more than a year.

In 2017 McKenna ratified the Minimata Convention on Mercury, an international treaty developed to “protect the human health and the environment from anthropogenic emissions and releases of mercury and mercury compounds,” the document reads.

“At that time Catherine McKenna said, ‘Our government is unwavering in its commitment to save the environment and the health of Canadians from the effects of mercury,’” Behrens recalled. “We are not seeing that safeguarding taking place on the other side of the toxic divide at Muskrat Falls in Labrador.”

Contacted by APTN News Monday, McKenna’s office said that “[r]eservoirs for hydroelectricity generation are not covered under the Minamata Convention on Mercury,” and referred APTN to the provincial government for further comment.

On Monday, Ball told reporters in St. John’s that he is working to arrange a follow-up meeting with Indigenous leaders imminently.

The Innu Nation also said in its media release Monday that four of six scientists tasked with reviewing the projections related to methylmercury impacts on wildlife and human health did not support full soil clearing from the dam’s reservoir.

Though there was not a scientific consensus with the IEAC, the Harvard-led study of 2016 remains the most comprehensive, and only, peer-reviewed science related to Muskrat Falls and the production of mercury.

The Innu leaders pointed out Monday that the Innu Nation “is the only recognized Indigenous rights holders in the area where the Muskrat Falls Project is constructed.”

But the environmental and human health impacts of Muskrat Falls are projected to spill over the political boundaries and into Nunatsiavut, the Inuit territory in Labrador whose people are projected to endure the dam’s worst impacts.

“They’re not the only Indigenous peoples in Labrador, and they need to respect us and our voices, saying we’re affected downstream too,” Norman said during Monday’s press conference.

Behrens, a longtime ally of the Labrador Innu dating back to their resistance of the NATO low-level flying in the late 80s, said that despite some First Nations leaders’ support for Muskrat Falls and other hydro projects, “that doesn’t necessarily reflect all of the communities’ opinion.”

Many Innu, mostly women and elders, joined the 2016 occupation of the Muskrat Falls site in an effort to delay the first stage of reservoir flooding.

At noon Monday around a dozen Indigenous activists and supporters attempted to deliver a petition to McKenna calling on the federal government to withdraw its $9.2 billion in loan guarantees for Muskrat Falls from the province, “unless there is 100 per cent proof that no methylmercury poisoning will occur if the dam goes online,” the petition reads.

It currently has more than 15,000 signatures. 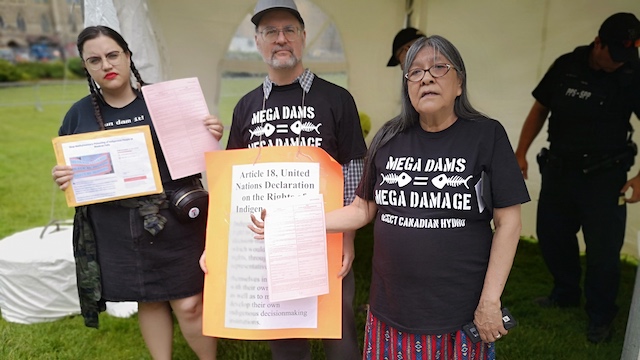 (Amy Norman, Matthew Behrens and Rita Monias were among those arrested Monday and banned from Parliament Hill. Photo: Justin Brake/APTN)

But as the demonstrators approached the west block on Parliament Hill, security guards warned that if they crossed a line they would be arrested and banned from the Hill for 90 days.

Within minutes, 13 individuals, including youth and elders, willfully crossed the line, gave their identification to security, and were escorted off the Hill.

Norman, who drove 23 hours from Labrador to attend Monday’s events in Ottawa, said she was determined to deliver the petition and was willing to risk arrest.

She said the Trudeau government “needs to use their leverage with that loan guarantee to force [the province’s] hand and get them to move on the recommendations from the [IEAC] that says we need to clear the vegetation from the reservoir.”

Behrens also had a message for the Liberals Monday.

“If you want reconciliation you don’t get it by committing further acts of cultural genocide,” he said.