The president of the Métis National Council (MNC) says it is facing challenges from “the rise and proliferation of groups in eastern Canada who are falsely claiming Métis rights.”

Clément Chartier says people are purchasing “bogus cards” for memberships in organizations they then use to “bilk salespeople” for purchase on items like vehicles.

“And I think it’s starting to work negative with respect to the Mi’kmaq people as well.”

The MNC recently signed a memorandum of understanding with the Mi’kmaq of Nova Scotia to work collaboratively on the issue.

“These so-called Métis Nation organizations in eastern Canada, when you see them on TV they’re using our Métis Nation flag which again is giving the wrong impression to the Canadian public,” Chartier said.

“They’re not us and they shouldn’t be using our flag.”

The MNC also has issues with the Metis Nation of Ontario (MNO).

The MNO joined the MNC in 1994 and has now found itself on a one year probation.

A report, presented by Chartier at the general assembly found the MNO, “has failed to apply the citizenship criteria of the historic Métis Nation.”

MNO President Margaret Froh said the report presented by Chartier contained “a number of errors and omissions” and blamed “media coverage” of the event for causing confusion. 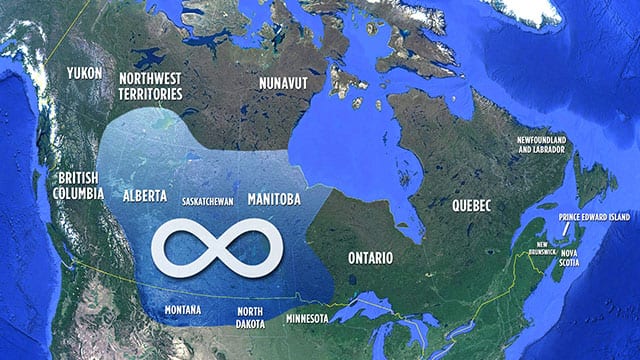 A new map of the Metis Nation homeland was also approved at the General Assembly.

“I say that the Treaty territories overlap our territory.  Which is fine, like I say it’s co-existence.  There’s no one exclusive to the other” said Chartier.

“We will continue to be negotiating with respect to our land rights.”

Chartier also reiterated his concerns with the National Inquiry into Missing and Murdered Indigenous Women and Girls.

He previously said it’s unfortunate the inquiry’s final report will “not reflect the perspectives of the Métis Nation.”

Chartier was also disappointed he did not have an opportunity to appear as an individual at the inquiry.

“My mother was brutalized and murdered and justice still hasn’t been done but I didn’t get that chance I looked for it but the Inquiry, never contacted my office at all,” he said.

Chartier said the only time he ever heard from commissioners was when they were looking for an extension.