The Nisga’a Nation has found a way to light up the holidays for those who have lost loved ones.

It started in 2013 after a young Gitwinksilhlkw woman was killed in a traffic accident.

“Paulina Faith Robinson, she died very suddenly, and she was only 20 when she passed,” said co-organizer Lena Griffin of Light Up Lisims.

Searching for a way to cheer their community, Griffin and co-organizer Tanya Azak were inspired by the famous Capilano Suspension Bridge in North Vancouver. 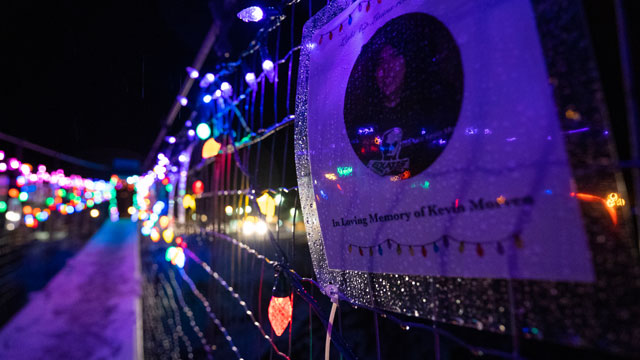 (Lights and photos are strung along a suspension bridge to remember loved ones. Lee Wilson/APTN)

Together they reached out to the Nisga’a Nation for donations. They received enough lights to cover half the bridge, which they powered by a gas generator.

“We were wondering what we could do to help lift spirits and bring some joy, even just a fraction, back into our communities,” said Griffin.

“We saw a picture of the Capilano Suspension Bridge all lit up, and we thought we have a suspension bridge why don’t we do the same?”

Griffin said Robinson touched every single person in all four of the communities on the Nass River along the Lisims found in Gitwinksilhlkw, one of four villages in the Nisga’a Nation located in northern British Columbia. 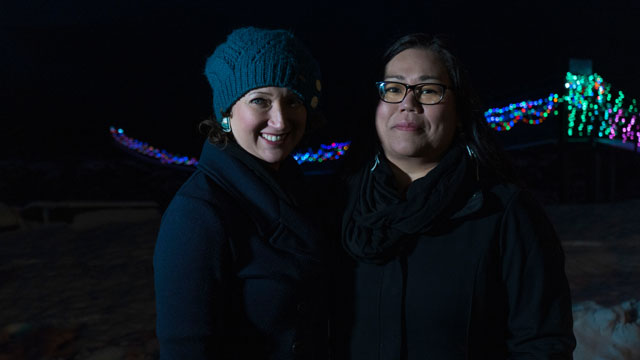 “We put a call out that night and asked for help, some donations, and support in any way possible, and that’s how Light Up Lisims was born,” added Azak.

Families send pictures of the loved ones they want to memorialize to Light Up Lisims. Those pictures are printed for members to place on the bridge or organizers do so if requested.

At the start, Azak experienced the loss of her father. She had to take a break from her role as an organizer temporarily but has since returned.

Her father’s picture is now among the lights.

“I know what it feels like to have that void in my life. For the first year, I had to step away and then came back the year after and was able to put my dad’s picture on the bridge,” Azak said.

(The 121-metre suspension bridge has been a special spot since 2013. Lee Wilson/APTN)

This year, the lighting of the bridge has a deeper meaning for Griffin, as she is processing her own loss.

“I do have a much more personal connection (since) my father recently passed away in June. I don’t have the capacity yet to put his picture on the bridge,” she said, “but I hope soon.”

Today, organizers are thankful for community volunteers and monetary donations for new lights that cover the full bridge.

They hope the light-up tradition carries on in the future, providing a memorial and comfort to those who need it during the season.

“To bring solace, to bring unity, to spread kindness, to remind everybody that Christmas is joyous for some but others it is a struggle,” said Griffin.