Indigenous music, art and stories will be front and centre during the 51st annual Festival du Voyageur in Winnipeg next month.

This year the organization behind the event aimed to increase it’s Indigenous programming for the largest winter festival in western Canada.

A live art installation from Jaime Black, a Métis artist and creator of The REDress Project, and a pop up culinary experience are some of the events taking place along with Festival favourites like the jigging competition.

After hosting last year, organizers felt the need for some self-reflection.

Along with celebrating francophone culture and people, the festival also pays tribute to the history of the fur trade.

Nadeau said that means the contributions of the original peoples has to be included.

“The fur trade era included real kinship and exchanges between Indigenous peoples and voyageurs and francophone people,” he said. 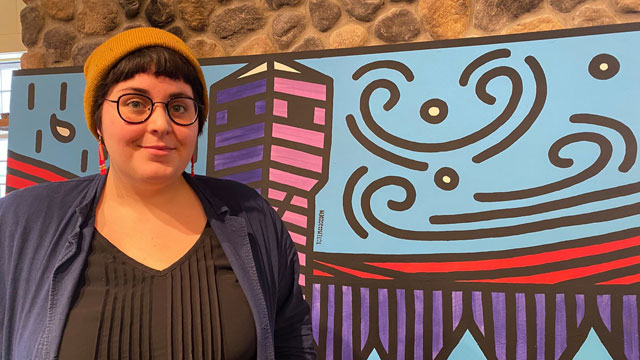 (Métis artist Robyn Adams was brought on to help with the festival. Photo: Brittany Hobson/APTN)

Adams is the Indigenous initiatives coordinator for the organization.

“My role in Festival is to essentially make the festival more inclusive to Indigenous people by creating partnerships, hiring artists…there’s going to be a lot of live art this year,” said Adams.

One of those is Oji-Cree visual artist Jordan Stranger who designed the festival’s logo, which blends elements of First Nations and Francophone culture.

“Nobody is bigger than anyone and we need to all be able to work together,” Stranger said in a statement. “Having that history at Festival – the fort itself with the fur trade and having First Nations as a part of it. They all operated together, and that’s the way it should continue.”

Adams’ position was created with funds from Manitoba 150 – a series of celebrations honouring the birth of the province.

Nadeau hopes the role and an increase in Indigenous programming will grow in years to come.

“We just want it to be seamless. We want to one day have a festival where it’s assumed there’s going to be Indigenous programming just like people assume there’s francophone programming,” he said.