A video posted to Candace Scott-Moore’s Facebook on New Year’s Eve shows a scene in Australia comparable only to a disaster movie: the blue sky completely blackened, choked out completely by swaths of noxious black smoke.

At the time of the video’s posting, 40 per cent of the Shoalhaven county – where Scott-Moore lives in Nowra with husband Richard – had already been scorched.

“We’d been smelling bush smoke every day,” she explained via Skype. “Like every day since November. I was just saying to my mom I almost forgot what fresh air smells like.

“Some days it’s very thick and strong, other days it’s just a mild scent of it, but it’s always there.”

At home, they prepared for the worst, donning gas masks while working outside to douse the property with water to extinguish falling embers.

“You could just see the orange glow on the mountaintops in the distance,” she explained.

But for the Scott-Moores, the most trying times were yet to come.

By News Years Day, community Facebook groups were buzzing with warnings about a strong southern wind – a “southerly” – as they’re called in Australia, was causing the fires to spread ominously towards Illaroo farm, a 445 hectare property run by Richard’s family, who are from the Yuin Nation.

For two decades, the expansive parcel of land hosted visitors in cabins.

During the day, they’d partake in activities to educate themselves about Indigenous culture – particularly that of the Yuin Nation, the traditional land owners who lived, prayed, hunted, gathered and danced on its grounds.

Before the bush fires, the farm was also home to a rich and diverse ecosystem, wildlife like kangaroos, wallabies, wombats, goannas, snakes, possums, and choruses of colourful chirping birds.

“That land taught me a lot, it was one of my greatest teachers,” Richard said. “Our forefathers roamed that land. The land had sacred tracks that led to Kangaroo Valley, and that’s where our ceremonies were. Not only that, but it has a lot of markings – traditional markings – on trees.

“There’s a lot of cultural significance.” 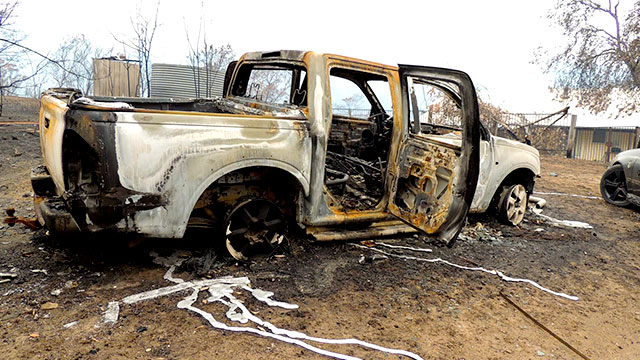 (The skeleton of a truck on the Illaroo farm. Everything melted say the Scott-Moores. Photo courtesy: Candace Scott-Moore)

In her time in Australia, Candace has also learned her fair share about the lay of the land down under.

“I can identify tracks, I can identify the animals there, the different bird species, even plants, trees, some of the bush medicine that Richard’s taught me about,” she said.

The farm was also the setting for some of the couple’s most precious memories.

It’s where Richard surprised Candace – who hails from Kettle and Stony First Nation in Ontario – with a marriage proposal.

“It’s a very significant place for us,” Candace said.

They were prepared to evacuate and contend with the situation, the couple explains, but there was no way to prepare for the utter devastation the fires would cause to the land used for millennia as a sacred gathering place for its Indigenous peoples.

“You could see the smoke coming over the mountains,” Richard explained. “I gave it about a week before it was going to hit our farm.”

“Once these winds pick up, there’s no way you can stop this fire,” he added. 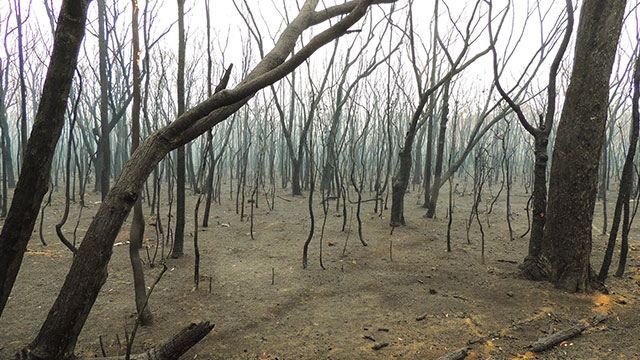 (The eerie remains of the forest on the Illaroo farm. Photo courtesy: Candace Scott-Moore)

Once the fires passed, and the exclusion zone re-opened, Candace and Richard made several attempts to drive back to the farm, but roads were obstructed by falling branches, and the bridge leading into it was all but gone.

“This is the first time I’ve experienced something so bad. So out of control. It was a shock to me,” Richard told APTN News. “From a green, lush bush forest to just… just blackness. Just burnt trees.”

The tires on their tractors melted right off, Candace said, and the alloy rims on their truck melted.

“They run like water on the ground. That’s how hot it was,” Richard added.

The farm lost its cabins, dining hall, main house, an expansive tool shed, a chapel, meeting rooms, a gymnasium, and a “mega kitchen” in the fire.

Walking around in the ashy brush, Richard saw trapped animals burned to death. Only one strangely survived.

“We have one lone chicken who survived on the farm on its own,” Candace says, laughing. Even Richard concedes that, in the moment, it was a funny discovery.

“So somehow he survived – he’s a survivor,” Richard added. 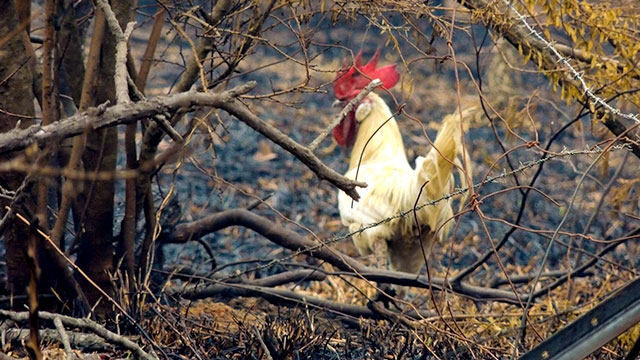 (The only animal that survived the fire on the Illaroo farm was a rooster. ‘Somehow he survived.’ Photo courtesy: Candace Scott-Moore)

The land itself – the plants and the seeds – will likely take much longer to regenerate, he says. But there’s hope still.

Meanwhile, Candace started a GoFundMe page to offset clean-up costs. While the page has a goal of raising $250,000 to offset cleanup and reconstruction work, it will cost millions to replace what the farm once was.

“There’s a lot of healing; there’s a lot that needs to be done,” Richard said. “Money means nothing. It’s all about looking after each other.”

“Things will continue,” he added.

Both Candace and Richard expressed an admiration and intense gratitude for those on the ground combating the fires – many of them, Indigenous women.

Some of them, Canadian.

Australia is suffering a lengthy and deadly wildfire season that began in October, which is several months earlier than usual.

More than seven million hectares across the country have burned, killing 28 people, destroying or damaging more than 3,000 homes, and forcing the largest peacetime evacuation in Australia’s history. 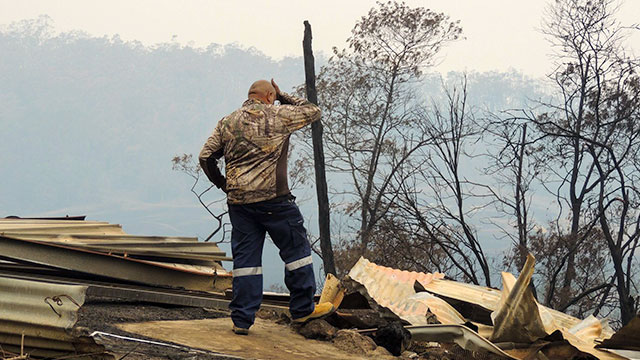 (Richard surveying the damage on the farm. They vow to rebuild it. Photo courtesy: Candace Scott-Moore)

It’s estimated more than half a billion animals have died.

More than 200 bush fires continue to rage across the country with the two most populated states of New South Wales and Victoria bearing the brunt of the damage.

This is the sixth wave of Canadians helping out in Australia, bringing the total number to more than 160 people.

Watch Lindsay’s story on the fires in Australia

To those who travelled across the world to help Australia, Richard offers a blessing in the language of his nation, translating to “may the four grandfathers from the four wind directions look over all of you and protect you.

“And thank you for your protection.”

As the smoke clears and the flames slowly reduce to embers, the promise of a new Illaroo farm ignites new hope for the Indigenous people who call the island home.

“It’ll never be what it was, but it’s a hope for something new,” Candace said.