The Canadian Press
VANCOUVER — First Nation, landowners, and environmental groups are accusing Justin Trudeau of reneging on promises made during last year’s election campaign as the federal government quietly authorizes construction to ramp up for a controversial hydroelectric dam proposed for northeastern British Columbia.

In a permitting document issued without fanfare late Friday before the August long weekend, the Department of Fisheries and Oceans and Transport Canada authorized B.C.’s power utility to move ahead with Site C.

This includes building the actual kilometre-long earth fill dam, along with the spillways, drainage tunnels and generating stations and, ultimately, permission to divert the Peace River and flood what will become an 83-kilometre reservoir.

Site C is a $9-billion megaproject that BC Hydro says will provide British Columbia with clean, renewable electricity for more than a century starting in 2020, though the proposal faces steadfast opposition from various groups over its environmental impact and a lack of consultation. 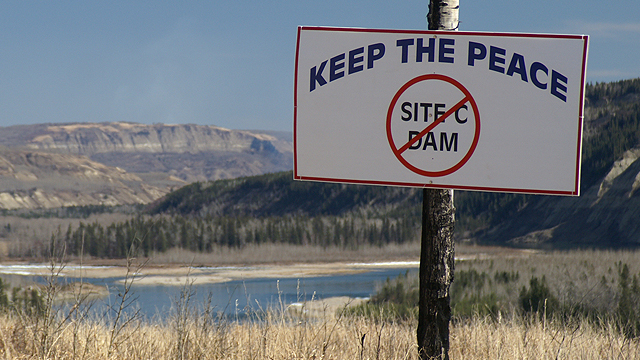 “If this were the Harper government, I wouldn’t be surprised at all,” said Ken Boon of the Peace Valley Landowner Association, adding that he was both shocked and disappointed by the news.

“(Trudeau) ran on a platform of doing things a new way, and having a nation-to-nation relationship with First Nations, and having greater environmental awareness,” he added. “And then we get this.”

Boon’s organization filed a lawsuit against Site C, which has since been rejected, though an appeal is pending.

By BC Hydro’s estimates, the Site C reservoir would expand the Peace River up to three times its width and flood 5,340 hectares of land, seven per cent of which is privately owned.

In an email, BC Hydro confirmed permits had been issued for the project by the Department of Fisheries and Oceans, as well as Transport Canada, which also authorize operating the facility for the next 50 years.

“Site C is a complex project with many different elements and the permits are an important part of construction proceeding as planned,” wrote spokeswoman Simi Heer. “There are more than 1,500 people working on the project and it is on time and on budget.”

The Department of Fisheries and Oceans did not respond to a request for comment.

Stewart Phillip, head of the Union of B.C. Indian Chiefs, described the approval as a bitter disappointment, especially in light of Canada’s pledge announced earlier this year to embrace the UN Declaration on the Rights of Indigenous Peoples.

“It represents an absolute betrayal of all of the commitments and promises Prime Minister Trudeau made during the last election,” Phillip said.

“We’re not the least bit impressed with Trudeau’s actions in comparison to his lofty public platitudes. There’s certainly a vast difference between the two.”

The project is the subject of multiple legal challenges, from First Nation communitiess, landowners and environmental groups alike. But last week’s authorization means construction of the megaproject won’t be held up while grievances make their way through the courts, including an appeal court decision on a Treaty 8 First Nations lawsuit that is expected this September.

Caleb Behn, a Treaty 8 member and the executive director of the advocacy group Keepers of the Water, described the permit approval as a politically motivated decision that reinforced the Trudeau Liberals’ business-as-usual approach to First Nations relations.

“And this is how you’re going to treat us in the 21st century? This is the kind of hypocrisy that makes me question the wisdom of my ancestors choosing to sign on to treaties.”

Behn predicted Site C will be a hot topic in next year’s provincial election.