Grand Chief Verna Polson of the Algonquin Anishinabeg Nation Council has launched a hunger strike across the street from Parliament Hill.

Little did thousands of Canadians know Monday as they walked by a birchbark wigwam on Wellington Street, just feet from the front lawn of Parliament Hill, that the Algonquin leader had put her life on the line as part of a long fight for her people’s rights on their unceded territory.

“She took this drastic decision to put her health and safety in jeopardy for what’s been happening to our nation,” said Frankie Cote, a member of the Kitigan Zibi Anishinabeg band council, who is accompanying Polson in Ottawa.

“She wants to draw attention to the way the Algonquin Nation is being treated by Canada and the [National Indigenous Organizations], being disrespected in our own territory.”

Polson set up the wigwam on June 19, two days before National Indigenous Peoples Day, to protest what the Algonquins say is the deliberate exclusion by the federal government and the three National Indigenous Organizations [NIOs] from a former embassy that is being gifted by Canada to Indigenous groups for political and cultural purposes.

Polson and Cote have maintained that the Algonquin Nation wants be be an equal partner in the new space, since the building sits on their traditional and unceded lands.

Cote says the federal government’s prioritization of the NIOs—which advocate for the rights of First Nations, Inuit and Metis peoples but are not official governing bodies—over actual communities indicates Canada is not dealing directly with Indigenous rights and title holders, in Ottawa or across the country.

“We believe if you’re gonna reconcile with Indigenous peoples you better start reconciling with the people who actually own the land, the people of the territory. Not the corporations, not the organizations,” Cote said.

Polson announced her hunger strike on Sunday, and began at midnight following drumming and a pipe ceremony.

She was surrounded by about 50 to 60 supporters, Cote said.

Algonquin chiefs, elders and youth positioned themselves by the wigwam Monday morning in front of 100 Wellington St. as they watched the holiday crowd gather on Parliament Hill.

But the grand chief cancelled, Cote said, explaining she had made the decision not to participate in the Canada Day events and instead focus on her hunger strike and ceremony.

Algonquin Elder Claudette Commanda told APTN News Monday at the site that, “as Canadians are celebrating Canada Day, my people the Algonquins, we’re not celebrating.

“We’re here to support our grand chief, who is sacrificing her life, dedicating her life, for her people,” she continued.

“We are demanding equal partners in whatever deal Canada and the Minister of Indian Affairs and three organizations have struck together, and have excluded the Algonquin people. We want equal partners in this building, whatever’s born out of this deal, and we want a physical space in this building where we can promote who the first people of this land, the Algonquin People. To promote our culture, our ways, our history, we need to be first and foremost.”

When ‘God Save the Queen’ and ‘O Canada’ played over the loud speakers and thousands gathered on Parliament Hill sang along, Commanda and a few others knelt down on one knee. The Algonquin elder explains why… pic.twitter.com/QskIHhO5J0

APTN requested comment from Crown-Indigenous Relations Minister Carolyn Bennett, the Assembly of First Nations, Metis National Council and Inuit Tapiriit Kanatami, but did not receive a response by the time of publication.

However, Assembly of First Nations Quebec-Labrador (AFNQL) issued a news release Monday in support of Polson and the Algonquin Nation.

“The AFNQL call on all parties involved in the opening of the Indigenous Peoples’ Space (100 Wellington Street) to reach an agreement with the Algonquin Anishinabeg Nation so that their recognition protocols are respected on their traditional unceded territory,” the release reads.

“Despite the sensitivity of Grand Chief Polson’s action, the AFNQL wishes to express its support for the positions defended by the Grand Chief with the support of the members of her Nation.”

“I am concerned that Grand Chief Polson has decided to make the ultimate sacrifice and is going on hunger strike, ironically, in front of the Canadian Parliament, located in the traditional unceded territory of her people,” he said.

“The discourse of the political class, which claims to respect the protocols of recognition of the traditional territory, is only symbolic since, in fact, the decisions affecting the Indigenous Peoples’ Space at 100 Wellington Street totally violate the right of the Algonquin Anishnabeg Nation to act fully on behalf of the Nation. This situation requires and deserves immediate and urgent attention.” 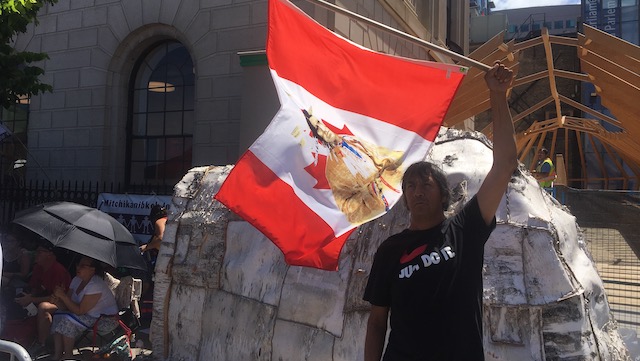 A man holds a flag in front of the wigwam where Grand Chief Verma Polson is in ceremony on day one of her hunger strike. Photo: Justin Brake/APTN.

After this story was published, APTN received a statement from the AFN, saying the organization “supports the position that the Algonquin Anishinaabe Nation must be full and equal participants at every stage. This is the respectful way and the right way to proceed.”

The statement says Bellegarde and the AFN “have been working diligently with all representatives of the Algonquin leadership to reach a consensus.

During the Canada Day noon ceremonies thousands sang ‘God Save the Queen’ and ‘O Canada’.

But when the songs played over the speakers, Commanda and others knelt down on one knee in protest.

“I took the knee to show the disrespect and the unjust treatment of the Algonquin people. They don’t respect us,” said Commanda.

Chief Lance Haymond of Kebaowek First Nation in Quebec was also in Ottawa to support Polson.

“We believe we have rights and title, and I know that the title will not get addressed in the short term, in terms of the Algonquin settlement of the territory,” he said, explaining the larger battle that the Algonquin Nation is engaged in with Canada.

“But in the interim there are opportunities for us to have that respect and that recognition as the rights holders on our ancestral lands,” he added. “So the position is that we want to be equal partners and have the same opportunities as the other NIOs, the Metis Nation and the Inuit, to tell Canadians and tell tourists about [our] language and our culture and our history.”

Chief of Kebaowek First Nation is also in Ottawa supporting Polson, who is also from Kebaowek. He says “there are opportunities for us to have that respect and that recognition as the rights holders on our ancestral lands.” pic.twitter.com/FiKVb36qLX

On multiple occasions Monday afternoon participants in the Canada Day festivities read land acknowledgements and referred to the the land on which those in attendance were standing as the “traditional” and “unceded” territory of the Algonquins.

Trudeau also acknowledged the Algonquin people, but omitted the word “unceded” in his speech.

Haymond said that “every political party, the prime minister, and the folks who stand up and acknowledge the land belongs to the Algonquin, but yet they’ve never given us an opportunity to benefit from what that would really mean.”

The Algonquin leaders criticized Trudeau over his promises of reconciliation and nation to nation relations.

“So when the prime minister talks about reconciliation, he has an opportunity to actually put those words into action. And that is simply acknowledging and allowing us to be an equal partner in these projects that are benefitting other NIOs.”

Editor’s note: This story was updated Monday evening to include a response from the Assembly of First Nations to APTN’s request for comment.