David Chapman stands near the kitchen inside the Open Door shelter in Montreal and points to a framed picture on the wall.

“It just struck me that she was really bright and had a, seemed like a full life ahead of her,” says Chapman, executive director of the shelter.

The photo he’s pointing to is of Crystal Einish, a Cree woman in her 20s from Eeyou Istchee – Cree Territory in Quebec.

She died after drinking too much alcohol.

“She was talking to me about her son, she loved her son, and to be honest I was just completely shocked when I heard only two days later she was no longer with us,” says Chapman.

Einish isn’t the only photo on the wall.

Dubbed the “memorial wall,” the photos are of former clients who have died – eight of the thirteen are Indigenous women, all within the last two years.

Before the photos had been located in a less formal space, near a bulletin board.

But after a deadly January, where three Indigenous women who frequented the Open Door died, the need for a larger wall became evident.

Chapman says he knew the women well and that substance abuse also played a role in the recent deaths of the two other women.

But when they were alive and wanted help, it wasn’t available.

He points to yet another photo, Inuk woman Connie Kadlutsiak.

“Connie asked three times to go to detox and rehab, and a number of efforts were made but each time there was a waiting list,” he says.

“And you often have a very short window of time where there is a desire to go forward with detox and rehab and if you miss that window then you’re back to square one.” 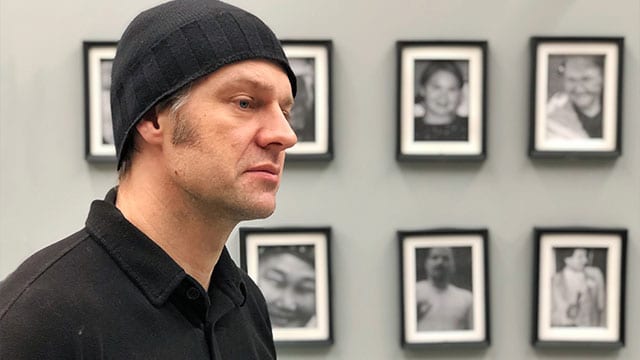 (Open Door Executive Director David Chapman. In the background is the wall of photos of clients who have died)

Harvey Michele is the interim president of the Indigenous Health Centre of Tiohtià:ke.

Tiohtià:ke is the Mohawk word for Montreal, and Michele says the city is lacking compared to Canada’s other major cities.

Toronto, Ottawa, Vancouver all have centres devoted to Indigenous health.

“We’re, let’s say, 20 years behind from other provinces, where they are more specifically targeting Indigenous health,” says Michele, an Ojibway who has lived in Montreal for over 40 years.

“For the underserviced Indigenous community, the need is great.”

Incorporated in 2016, the Tiohtià:ke Health Centre is still in its infancy.

The goal is to eventually establish a location where Indigenous people can get health services catered to their needs.

“The Indigenous Health Centre of Tiohtià:ke would work with the community member in dealing with the root cause of their addiction. Sadly, many First Nations and Inuit continue to fall in the cracks,” says Michele.

“The rate of mortality is very high for this population due to the lack of access to addiction and mental health services that are culturally not safe for the vulnerable population.”

Michele says that the health centre is a part of a larger conglomeration of Montreal Indigenous organizations called the Health Services Partnership Table for Urban Indigenous Persons.

Together they are gearing up to push for health services funding, but Michele admits establishing a fully functioning Indigenous health centre in Montreal will take years.

In the meantime, she would like to see more funds for health navigators, people who are paid specifically to help vulnerable folks navigate the health system.

The health centre currently has two on staff.

For David Chapman, more funding and programs can’t come soon enough with regards to keeping more photos from going up on the Open Door memorial wall.

“In this case there is very much a direct link between funding recovery and span of life.”

Born and raised in Montreal, Tom cut his teeth working in community television in Kahnawake Mohawk Territory before joining APTN as a cameraman/editor in 2008. In 2015 he was promoted to Video Journalist and has since helped cover important stories such as the Muskrat Falls protest in Labrador and anti-pipeline actions in North Dakota.