Prime Minister Justin Trudeau’s new round of consultations with First Nation communities over the Trans Mountain pipeline expansion project got off to a rocky start Monday.

Outside the hearing in Kamloops organized by Natural Resources Canada (NRC), three members of Tiny House Warriors – an Indigenous anti-pipeline group – were arrested after a noisy demonstration.

Representatives from Trans Mountain were also at the Phase 3 hearing formed to meet with 117 Indigenous groups impacted by the proposed pipeline expansion project.

“These roundtables are a space for potentially impacted communities with varying views on the project to come together and help shape this process,” said Catherine Leroux of NRC.

“We stand firmly behind the right to peaceful protest. However, actions that could interfere with any groups ability to safely participate in this process raises serious concerns.”

The consultations come after the Federal Court of Appeal said the government failed in its constitutional duty to consult properly with Indigenous groups.

It refused to approve an application from the National Energy Board in October. 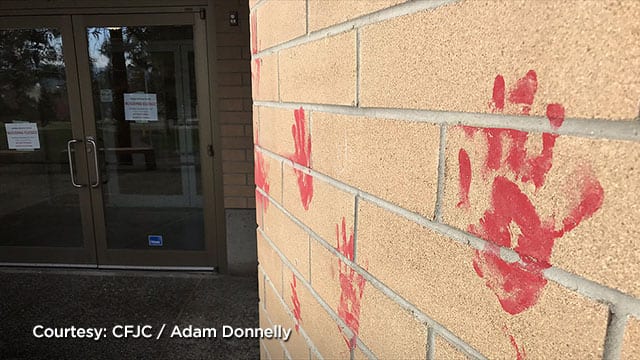 A spokesperson said the university was still tallying up damage it says demonstrators caused.

“I checked and we won’t have an estimate for a few days,” said Darshan Lindsay.

Cpl. Jodi Shelkie of Kamloops RCMP believes the call for police came from campus security after demonstrators took up positions outside the meeting room.

“We had been advised that there were eight protestors at Thompson Rivers University,” Shelkie said.

Shelkie said three people – a male and two females – were arrested and released Tuesday night and charges were pending.

She said the “protesters” smeared red paint on walls and allegedly assaulted a security guard.

The Tiny House Warriors confirmed three of its members were taken into custody. It posted video of the incident on its Facebook page.

“The land defenders arrested were Mayuk Manuel, Snutetkwe Manuel, and Isha Jules,” the group said in a release.

“Mayuk Manuel and Snutetkwe Manuel are daughters of the late Arthur Manuel, a renowned Secwepemc Indigenous leader on the world stage and a strong advocate for self-determination.”

“Just because the government talks to a few bands recognized by Indigenous and Northern Affairs Canada, that doesn’t amount to meaningful consultation.”

Their strategy is to place tiny houses along the 518-kilometre route.