After more than 100 years, a Big House is now standing again in Bella Bella thanks to the resilience of the Heiltsuk people.

For B.C. coastal nations – Big Houses are the centre of governance and traditional practice.

Hereditary Chief Harvey Humchitt said it was quite a moment when the “Gvákva’áus Haíɫzaqv” or House of The Heiltsuk opened for the first time.

“I had a roller-coaster ride of emotions; it was really important to us, and it was really good to see our community turn out for the opening of the big house,” said Humchitt.

The Canadian government banned any kind of ceremonial practices like potlatches in 1885.

Five years later in 1890, children started being sent away to residential schools.

“For over 60 years we carried on without performing on our potlatches. Now, this Big House is going to ensure we can carry out our potlatch,” said Humchitt.

The potlatch ban ended in 1951 but it took time for Heiltsuk people in Bella Bella to start practicing culture openly again.

“One of the things was so interesting and so sad at the same time, even though the potlatch ban had been lifted in Canada, nobody told our people it was OK to do this,” said William Housty, cultural advisor on the Big House. 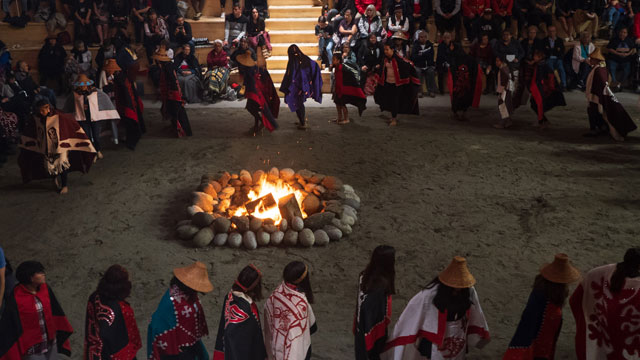 Construction of House of The Heiltsuk was a vision of many community members who have now passed on. Initial donations for the building of a Big House came in more than 50 years ago.

Now, in collaboration with community, heredity chiefs and tribal council, they were able to raise $7.2 million to complete the project and carry out the ceremonies.

“It’s been 40-plus years of trying to make this happen and it finally culminated in this today.”

Most of the wood used in building the Big House came from Heiltsuk territory. Four beautiful house posts hold up the frame. Carvings led by Heiltsuk artist Ian Reid.

Larry Campbell-designed art decorates the face of the Big House as well as a  pole gifted by Haida Nations and carved by artist Christian White.

The pole is a reinforcement of a peace agreement between the Haida and Heiltsuk, who had a history of war during the pre-contact era.

Haida Hereditary Chief Gidansda told how the nations came together.

“David Gladstone, Hṃ́zít, had brought some of the songs that were held here for years,” said Gidansda.

“He brought those songs back to a potlatch. From there we started the discussions.”

Both the Haida and Heiltsuk blessed the pole before it was raised to stand in the front of the Big House and finalized with potlatch and celebration.

The agreement strengthens the alliances for defending their land and water rights.

“When you look at what’s happening globally, we have had a lot of success protecting the Great Bear Rainforest, half of Haida Gwaii, but yet the global forces that are happening put everything in peril,” said Gidansda. 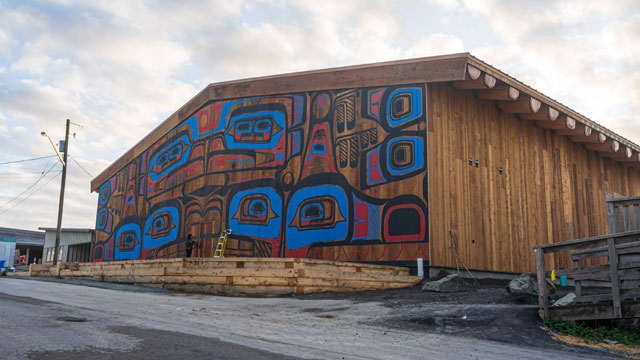 The Big House stands to preserve the culture and serve as a place for social gatherings. It will be the focus for young Heiltsuk to practice song, dance and ceremony.

Youth will gain knowledge and language from Elders. They will then pass it down to the generation after them as has been practiced before for thousands of years.

“Investing in our youth and making sure they have the opportunity to express themselves as Heiltsuk people has been a vision for our leaders for a very long time,” Housty said.

“So everything we do here yesterday and the coming days going into the future is for all the young children that have yet to be born.”

Hundreds of visitors from nations across Turtle Island came to celebrate five days of ceremonies filled with song, dance and traditional foods.

1 thought on “‘It was really important to us’: Bella Bella gets its Big House back”