A supervised visitation schedule obtained by APTN News and imposed on a British Columbia couple fighting to have their newborn returned from the child welfare system, underscores the frustration expressed by those who say the system doesn’t work for families.

Baby H, who is now three months old, was taken by Ministry of Children and Family Development (MCFD) workers from a Kamloops hospital two days after she was born in June, based on the allegation that the mother was neglecting the infant 90 minutes after she delivered by C-section.

The MCFD gave the couple, first-time parents in their 30s, a September visitation schedule that allows them supervised visits with their daughter.

It was devised without consultation of the parents, they say, including the dad who in taking university courses that conflict with the timetable.

“Their schedule makes no sense,” said the paternal grandfather, as a baby’s naptime or feeding schedule doesn’t differ by day of the week but the times she’s available to her parents does.

“It can’t be good for a baby and they (MCFD) refuse to change it or even explain how or why they come up with it without consultation with the family.

Baby H’s father was told the schedule is not negotiable despite conflicts with his university courses.

The mother is able to see the child every day during those times.

APTN cannot lawfully name the family as the child is in care. 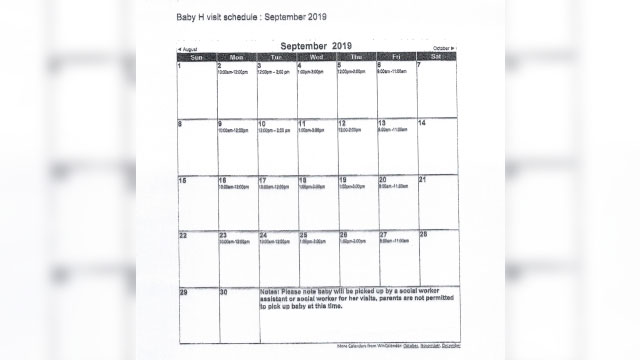 The parents say they’ve still not been told what the vague “safety concerns” are that are keeping them from caring for the girl, other than the “neglect” reported by the hospital.

In an audio recording after the newborn was taken  the soft-spoken, shell-shocked dad said, “I still see no reason why (mom) and I aren’t capable of loving our child and taking care of her.”

A Kamloops social worker can be heard saying, “I don’t think anyone is saying you’re not capable of loving (Baby H). Everyone’s concerned about baby being cared for and her immediate basic needs being met and we don’t have time to assess that.”

Instead of taking that time to assess, the agency deemed the child as being at a high risk for injury or death and that declaration alone is enough to seize an infant.

The worker on the recording went on to say that in the first 48 hours of the baby’s life “numerous” medical staff made notes that the baby was being neglected. That’s why they showed up when the baby was 90 minutes old.

The family said the mom wasn’t responding to the baby’s cues because she was exhausted and either sleeping or sedated – not uncommon within 48 hours of having a C-section.

In the recording, the social worker admonishes the father saying, “(Mom) can’t even be roused for this meeting because she’s so out of it.”

The baby’s dad replied incredulously, “Yeah, from the prescription medication she was given from her doctor.”

The social worker advised the distraught father that, “We’re not going to change our decision. Time will change our decision, how you interact with support services outside the hospital and engage in child-centered services. So learning about child-centered cues and learning what it looks like to be a parent, I think, we need to see you demonstrate that in the services before we’d consider allowing the baby to be returned to your care.”

B.C. CFS moves in to seize 90 minute old baby on report of neglect

B.C. ends birth alerts but families question what it means for babies already in care

The parents and their families have been fighting ever since to have the baby returned.

MCFD workers have had the infant in five foster homes in her short life.

No one in the Minister Katrine Conroy’s office has responded to request to clarify whether MCFD workers can impose a visitation schedule on parents without consultation.

The baby’s grandpa said that questioning case workers and recording meetings with them – which MCFD confirms is not against its own rules – along with the story being in the media, has resulted in punitive blowback against the family. Longer waits, fewer phone calls returned and seemingly no movement for a timeline to return the baby.

All of this comes as B.C. says it will end the controversial birth alert practice that separate moms and babies shortly after birth, and a damning review  of the child welfare system in B.C. that disproportionately preys on Indigenous families.