The owner and operator of the Auberge Maanitaaukimikw bed and breakfast in the Cree Nation of Chisasibi didn’t expect the simple act of trying to order a DVD from Best Buy was going to become political.

But then he noticed the shipping cost.

“Usually, when I order from Best Buy, it’s free shipping if you order a certain dollar amount,” said Kanatewat. “Somewhere along the way, I noticed there was a charge being levied for J0M 1E0, the Chisasibi postal code.”

In mid-July, he did a double-take when he saw the shipping cost for the Superman vs. Batman DVD he was about to order: $62.99.

This charge reflected courier fees: in the lead-up to the potential Canada Post lockout, some companies arranged courier shipping at a greater cost than usual.

“But then, I heard if you get stuff shipped to Radisson, Que., they don’t have a shipping charge—it’s still free when you order from Best Buy.”

He double-checked and discovered this was true—shipping the DVD to the tiny non-Indigenous hamlet of Radisson, 100 kilometres east of Chisasibi, would cost nothing.

Shipping rates have returned to normal now—it once again costs $5.99 to ship a parcel to Chisasibi that ships for free to Radisson.

Chisasibi is the largest of the coastal communities that sits on the Quebec side of James Bay at the mouth of La Grande River in the Cree Nation of Eeyou Istchee.

The La Grande was dammed in the 1970s by Hydro Quebec following the long legal battle with the Cree of Eeyou Istchee that resulted in the signing of the James Bay Northern Quebec Agreement, Canada’s first modern treaty.

To facilitate construction of the dams, Quebec built the James Bay Highway, the region’s major thoroughfare that runs more than 600 km from Matagami to Radisson. 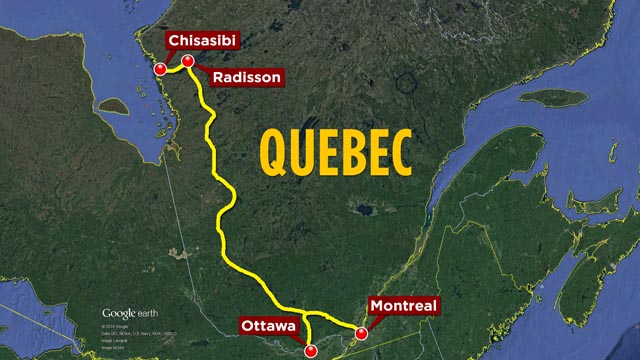 At the last crossroads before Radisson, the highway switches from north-south to east-west, running 20 km east to Radisson, and 85 km west to Chisasibi.

With a population of more than 4,500, Chisasibi is the largest community in the region. Radisson, founded in 1974 as a base for workers building Hydro Quebec dams on the La Grande, has only 270 inhabitants.

A social-media savvy entrepreneur, Kanatewat took to Facebook to complain about the privileging of Radisson over Chisasibi, tagging Best Buy and Canada Post—as well as his Member of Parliament Romeo Saganash, and Matthew Coon Come, Grand Chief of the Cree of Eeyou Istchee.

Soon Best Buy responded, but could only tell him his postal code designation J0M was one of “a handful of postal forward sortation areas for which free shipping is unavailable.” These include remote regions in Nunavut, Northwest Territories, and the Yukon. Best Buy calls the “J0M” the “Chisasibi area.”

There are 18 communities served by the J0M postal code or as Best Buy calls it, the “Chisasibi area.”

Only three others are near Chisasibi. The Cree Nations of Wemindji, Waskaganish, and Eastmain.

All other communities covered by JOM are small fly-in hamlets in Nunavik including Ivujivik, Salluit, and Kujjuuaq. Some are as far as 1,000 km north of Chisasibi. 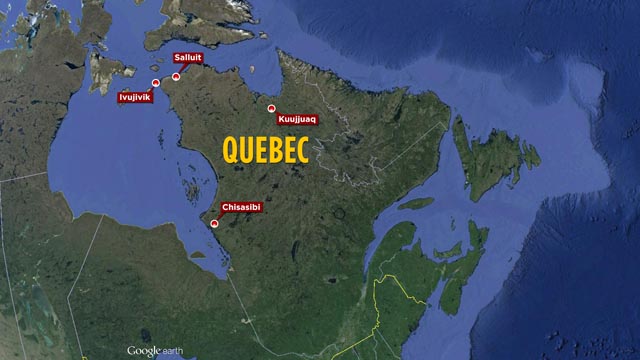 “How the hell can they get an Abitibi postal code when they’re just 65 kilometres from Chisasibi?” Kanatewat asked. “We’re being unfairly treated: we’ve been put in with this group of isolated communities, as though we’re remote communities only accessible by plane.”

Best Buy is one of many retailers whose shipping to J0M is strikingly expensive.

In response to Kanatewat’s facebook post, a woman in Waskaganish posted a screenshot of a shipping quote of $4,000 from Wal-Mart on a $949 baby crib and armoire.

Another posted a $100 shipping charge on a $39 Wal-Mart purchase.

And it isn’t just deliveries.

Kanatewat said that as soon as he graduated from his studies in Gatineau, Que., and moved home to Chisasibi, he was informed that Allstate would no longer insure his car because they did not insure vehicles in the J0M region.

A quick survey of online insurance quotes revealed that several other major Quebec insurers—including the Cooperators and Industrial Alliance—will not insure in the J0M area.

Some will insure Radisson, some will not. Some (such as Allstate) would also not insure in Radisson, while others (like the Cooperators) would provide a quote for Radisson but not insure in Chisasibi.

“Enter J0M at any company, and everything stops,” said Kanatewat. “That’s big money—that limits the number of companies you can deal with, and they jack up the prices. If all the insurance companies were providing service to J0M, I’m sure we’d have much more competitive pricing.”

The availability of free shipping and easy access to insurance in Radisson sparked online accusations of racial discrimination, and ghettoization of Indigenous communities and Reserves.

In response, Grand Chief Matthew Coon Come sent a letter to Minister of Public Services and Procurement Judy M. Foote to address the issue. Noting that the postal code “is basically a category for isolated communities,” the Grand Chief said. “While the J0M code did apply […] before access roads were built, for many years all of these communities have had access roads and are therefore not isolated.”

Residents are being charged what the Grand Chief called “a remote community tariff” on items bought online, as well as on insurance.

“I therefore ask you to look into this situation with a view to correct what we see as an unfair tax being applied to these communities,” Coon Come said in closing.

The following week, the Chisasibi Band Council entered the discussion when they passed a resolution declaring that the community was not “isolated.”

Christina Kitty, Corporate Secretary to the Chisasibi Band Council tells APTN that because “The communities [with the] postal codes that start with J0M are declared as isolated communities and tend to get charged ridiculous shipping charges. So the resolution to declare our community not isolated would possibly help the fight to change our postal code.”

“Canada Post assigns postal codes for the sole purpose of processing and delivering mail as efficiently as possible. We don’t control how the insurance industry or other organizations use these codes.”

“That’s insulting,” said Louis-René Kanatewat. “There’s no mention that we’re grouped up with fourteen isolated communities. They don’t even acknowledge it.”

Kanatewat doesn’t believe the issue is finished, and he’s grateful for the efforts by the Grand Chief and the Chisasibi Band Council, and hopes their pressure will open a dialogue.

Meanwhile, he still hasn’t seen Superman vs. Batman—he’s waiting until his next trip down south to Ottawa to buy it in person.

— Jesse Staniforth is a freelance journalist who lives in Montreal.