Patricia Makokis, along with about 30 people from various church groups and members of the Alberta Health Science Associatinon completed their walk from Edmonton to Calgary Monday.

The walk was not an effort to raise awareness of an injustice or cuts to a government program, but to teach non-Indigenous people what it’s like to live as a Treaty person.

Each stop along the way on the Walk for Common Ground, in places like Beaumont, Leduc, and  Wetaskiwin, Makokis sits and teaches the locals in the area about Treaties.

She shows them a documentary that she produced that answers many of their questions.

She is more than happy to answer any others they may have.

She’s from Saddle Lake Cree Nation and has a Ph’d in Education, and has worked at the University of Alberta.

Blisters, cold, wet, hot and even snowy June conditions did not stop Anita Crowshoe from walking the 350 km

“The experiences we had along the way, wow,” she said. “Still brings tears to my eyes. Sleeping in churches where you know the history. Hearing settlers who are our allies talk about I don’t know this, I didn’t know that.”

She said she learned a lot on her walk and time spent with Makokis.

“It seemed like I was in a dreamland because I’ve been trying to do some education and learning , and relying on Pat’s teachings along the way as well,” she said. 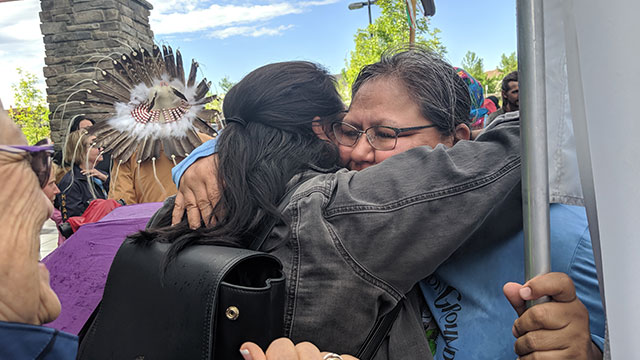 The group unanimous choice for favourite stop was in Maskwacis.

It is made up of four Indigenous communities: Samson, Louis Bull, Erminskin and Montana.

They were given a warm welcome by community members and leaders.

“They drummed us in. Welcomed us. They had a big feast for us. The hall was full. Their Chiefs came out to talk to us. “ said Makokis.

Elders, family and supporters were at the Health Science Association of Alberta’s headquarters in Calgary.

At their last stop the cheers were loud, the feast was good and the time was right to rest their bodies and sore feet.

Makokis says there may be another walk next year in a new location to teach more people about Treaties.