An Abenaki community in central Quebec is issuing a warning to regional businesses out of concern shoppers are using counterfeit Indian status cards to save money.

Fake status card distributors in Quebec have already been subject of RCMP crackdowns, but local businesses are still falling for the scheme.

As an example, Watso says flashing a $25 counterfeit ID card is in many cases enough to deduct $8,000 in taxes from the price of a new vehicle.

“There are lots of people who drop off their new vehicles in Odanak to take a photo and prove to Revenu Quebec it was delivered on-reserve,” he said.

A newly formed committee in Odanak is working to investigate suspicious claims to Abenaki identity, while also distributing pamphlets to business owners to show them what status cards issued by the federal government look like.

For the band, it’s a way of combating an expansive – and expensive – problem.

“We have solutions for us and by us,” said Watso. “It’s not people who want to ‘play Indian’ who are selling cards for $25 and defrauding the government on the backs of First Nations. We already have enough problems like that.”

The ID cards tend to vary in appearance. Some are fraudulently labelled “Certificate of Indian Status,” just like government-issued IDs.

Others are simply considered “membership” cards – proof of affiliation to a particular nation or community – but Watso believes business owners can’t discern which are legitimate cards, and which are dupes.

Evading taxes is illegal, and the police have tried to crack down on the problem with little success.

There are dozens of ‘self-declared’ Indigenous groups currently on Odanak’s watchlist; while some are Quebec-based, other disputed groups are found in Vermont and New Hampshire.

“These people are aggressive towards First Nations because they want their piece of the pie and the financial advantages,” said Watso.

The business owners who fall for the ruse have to pay the government back for the lost tax revenue – not an easy task at any time, especially if big bucks are involved.

The Odanak council is trying their best to educate their business neighbours: Watso says they’ve distributed letters on self-declaration to almost every municipality on Abenaki ancestral lands.

They’ve even passed pamphlets around car dealerships, electronics stores, and school boards – anywhere the cards may be mistaken for legitimate government ID.

According to Watso, businesses burned by ID card or tax fraud often go on to discriminate against legitimate card-carrying community members, subjecting them to what he refers to as “economic racism.”

“In neighbouring communities, people don’t understand what an ‘Indian’ is. They don’t care about the difference between a status card, a fake ‘Indian card’ and an ‘alliance’ or ‘Metis’ ID card,” he explained. “It doesn’t matter, they don’t know the difference.”

“When you show your card, people say ‘well, in our collective memory, it’s true Natives don’t pay taxes, so this sounds about right.'”

A proud member of the Innu Nation, Sylvie is from the community of Uashat mak Mani-utenam in Northeastern Quebec. Sylvie worked for her council as a communications officer, after being a journalist for community radio in her community. Since 2019 she has worked as a reporter for the French weekly newscast Nouvelles Nationales d’APTN. 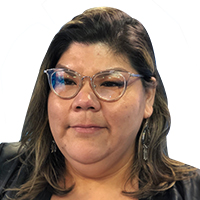