Members of an Indigenous protest camp in Saskatchewan are raising doubts about Premier Scott Moe’s apology to ‘60s Scoop survivors next week.

“I don’t know who will believe him,” said Prescott Demas, who helped establish the Justice for our Stolen Children teepee camp across from the Legislative Building last year.

According to the Regina Leader-Post Moe was behind the camp’s closure – something Demas said was always suspected.

“This speaks to his integrity,” Demas said in a telephone interview from Regina.

“This colours what he will say (Monday).”

Moe is scheduled to apologize to adult adoptees known as ‘60s Scoop survivors for his province’s role in taking or “scooping” Indigenous children from their families to be raised in non-Indigenous homes.

The practice happened across Canada between the 1950s and ‘80s and only two provinces – Manitoba and Alberta – have apologized so far.

The federal government has agreed to compensate some victims through an $850-million class-action settlement. 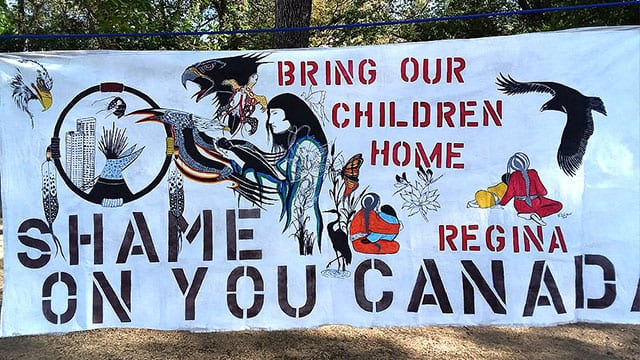 A banner on display at the protest camp. (Prescott Demas photo)

Demas said his brother was “scooped” and raised as a Christian in a white family but re-connected with his Indigenous culture at the camp that opened Feb. 28.

“He smudged and took to it naturally,” Demas said of access to medicines and the fire that was kept burning.

“I can’t speak for him but I don’t think much of the apology now.”

The camp started with one teepee in Wascana Park following the acquittals of white men accused in the deaths of Indigenous youths Colten Boushie and Tina Fontaine.

But Police Chief Evan Bray – as confirmed in the recent Leader-Post story – urged mediation instead of confrontation.

In total 15 teepees sprang up to symbolize important issues in the lives of Indigenous peoples and their interaction with government in more than the justice system, said Demas, who was at the camp for six months or 197 days.

“We picked the name after agreeing that we have too many youth in the child welfare system,” he added.

A visitor book collected more than 2,000 signatures, and he said he spoke to hundreds of people about what the protest was trying to achieve.

“If you’re continuing to perpetuate the same kind of trauma on the children and grandchildren of those (‘60s Scoop) survivors you’re not actually apologizing,” she said. “It’s lip service.”

Pitawanakwat said the story shows police gave in to pressure from a premier more concerned with property than people.

“In an era of reconciliation…they’re not actually concerned with improving the lives of Indigenous people.”

She said the issues the camp was trying to address remain and work continues at the grassroots level to make change despite the province’s conservative stance.

“They have very racist policies.”