After several months of pushing the Ontario government, APTN News can now report how many Indigenous children have died connected to the province’s child welfare system since the novel coronavirus was called a pandemic on March 11.

Child welfare agencies reported 11 deaths of Indigenous children to the chief coroner of Ontario, as of July 16, which provided the data to APTN this week.

Of the 11, three deaths are classified as “in care”, meaning they were likely living in some sort of foster or group home, while the other eight had “society involvement” within the last 12 months before their death.

That typically means the child had an open file at an agency, known in Ontario as children’s aid societies or Indigenous wellbeing societies, both legally mandated by the Ontario government.

Having a file open can mean a variety of things, such as having lived in foster homes for years only to be suddenly sent home. APTN is aware of several deaths by suicide this way in recent years. It could also mean a parent wanted counselling services on-reserve but the only place to get help is the child welfare agency.

Families have repeatedly told APTN they fear having a file opened because it’s difficult to close.

It also includes children that have died in what’s known as informal customary care agreements, where the on-reserve agency determines where the child will reside, usually with family, but the child is not classified as in care.

The cause or manner of death in the 11 cases was not provided to APTN, as the coroner’s office said it was still too early to provide that information, as the files haven’t been closed, which could take months.

This detail is important because many group or foster homes are known to be difficult for a child on a regular day, so APTN has been trying to determine how the children are managing in the homes that were supposed to be under lock-down conditions for months to fight the virus.

Indigenous child make up half of the total number of deaths in care during the pandemic, as there were six in total.

The total number jumps to 36 deaths overall during that period when including society involvement. As mentioned, 11 of the deaths were Indigenous children, meaning they make up a third of the deaths.

The coroner’s office also provided the total number of deaths for 2018 and 2019, which have never been reported, until now.

Data shows 35 Indigenous children died in 2019 with society involvement. Just one was classified as “in care”. Overall the number was 121.

In 2018, the coroner says 18 Indigenous children died. Two deaths were in care. The total number of deaths 119.

“As we have with the way we care for seniors we must have a similar independent inquiry into our child protection system which will make immediate changes in real time as the inquiry moves forward to allow us to better protect and nurture our province’s most marginalized children and families,” said Irwin Elman, the former Ontario children’s advocate, referring to the commission called into all the deaths in long-term care homes over the last four months.

APTN previously reported there were 102 Indigenous deaths between 2013 and 2017, with half of the deaths happening in 2016 and 2017. Below is a chart from that investigative story: Death as Expected: Inside a child welfare system where 102 Indigenous children died over five years 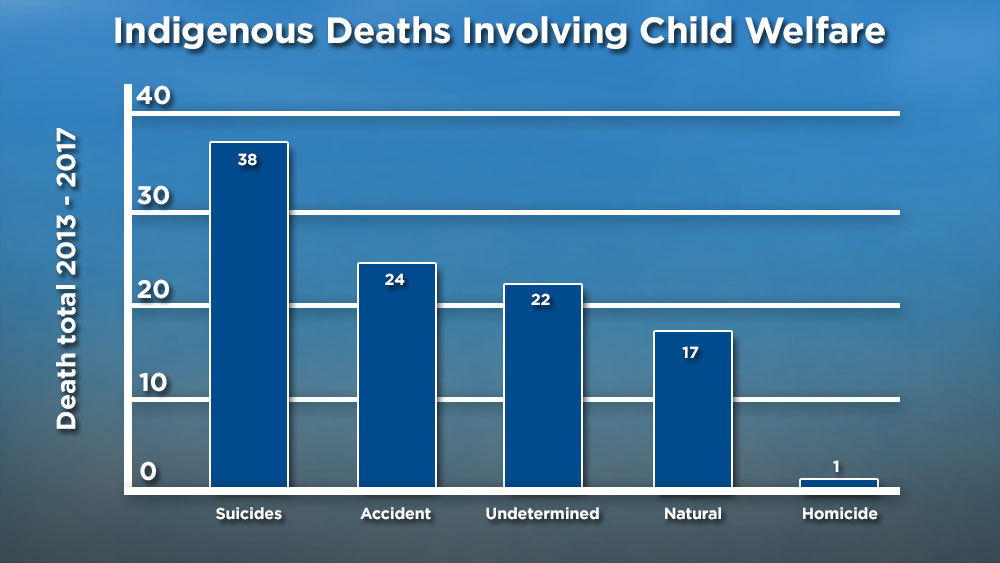 That means 155 Indigenous children died with society involvement over the seven years between 2013-2019.

“To say that the numbers are alarming is such an incredible understatement particularly when we force ourselves to remember each one is a person/child and all their bright potential lost, a family torn and a community devastated,” said Elman.

Between Jan. 1, 2020 and Mar. 10, a day before the pandemic was announced, the coroner reports 22 children died with society involvement and six were Indigenous.

Up until this week, the Ontario government has refused to provide the data forcing APTN to file a request under the Freedom of Information Act only to hit wall after wall with the department, as well.

However, APTN is still waiting for the number of serious injuries in foster/group homes that are reported to the ministry of children, community and social services and the ombudsman’s office, both of which refused to freely provide the information.

The coroner’s office said the full data for the 2018 deaths will be released later this year.