A subsidiary of TransCanada Corp. says it’s poised to lose “billions of dollars” if it can’t start work on a natural gas pipeline being blocked by an Indigenous clan.

The drama playing out in a remote part of northwestern B.C. is scheduled to be heard in a Prince George courtroom Thursday.

“It’s been a bit under the radar with so much else going on in B.C.,” said First Nation lawyer Merle Alexander of Victoria.

“If (defendants are) successful it will be a substantial win for hereditary leaders.”

Members of the Indigenous community occupy and operate the Unist’ot’en Camp – a healing centre – on their traditional territory south of Houston, B.C.

They are part of the Wet’suwet’en, which also has an elected band council.

That council – along with 19 others along the proposed 670-kilometre route – signed an agreement in support of the Coastal TransLink project.

The project would see the company pipe fracked natural gas to a coastal port in Kitimat, B.C., to be liquified at a new export facility before being shipped to Asia.

The company said in court documents construction work is valued at $2.8 billion and would create about 2,500 jobs.

But despite having “all the necessary permits and authorizations“ it can’t get past a locked gate on the Morice River Bridge the camp controls.

“As a result of the defendants’ actions, Coastal GasLink and others have suffered and continue to suffer irreparable harm,” the company alleges in a civil claim it has served on camp spokesperson Freda Huson and her partner Warner Naziel.

The company said the project is stalled – possibly for good – unless a judge grants the injunction it has filed to prevent the “blockaders” from continuing. 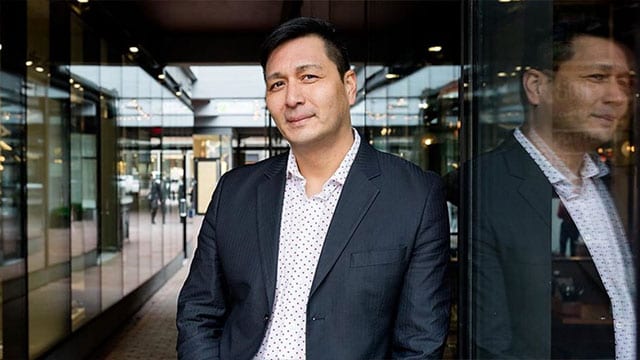 Alexander said the case pits elected Aboriginal government against Indigenous hereditary systems because Naziel – one of five Wet’suwet’en hereditary chiefs – claims to have a legal right to be there.

“His individual response is that he’s not there in his personal capacity; he’s there on behalf of his clan.”

Alexander said this is different from the landmark Delgamuukw case, which helped establish Indigenous rights and title.

“The Canadian legal system has not had a lot of opportunity to recognize how hereditary legal systems interact with elected chiefs and council,” he said in an interview Wednesday.

Meanwhile, Naziel said he and Huson are having trouble finding a lawyer to represent them.

He said the couple tried to delay the court date for that reason and because his mother is in palliative care but the company wouldn’t agree.

“They’re being very unreasonable,” Naziel said in an interview. 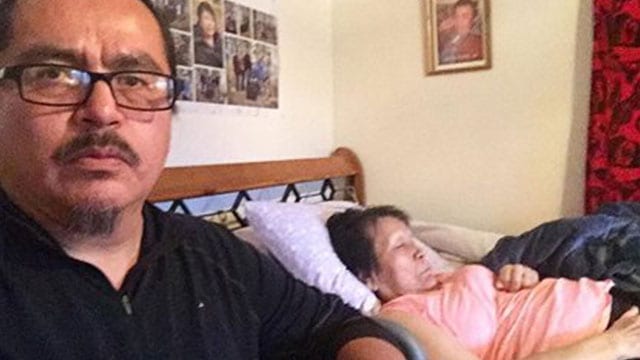 Warner Naziel at the bedside of his ill mother (Facebook photo).

“We are trying to find out if we can attend (the hearing in Prince George) by phone.”

Alexander said most members of the Aboriginal bar in B.C. work with elected councils, which would put them in a conflict of interest.

As well, many worked with bands along the pipeline corridor.

“I represented a number of First Nations on this particular project,” he added.

Naziel said the couple also lack the financial resources to attend court and have started a defence fund on the camp’s Facebook page.

They run a wellness centre that practices the philosophy of healing the land by healing the people.

“We reject the greed and colonialism involved in resource development,” Naziel said.

“The safety and wellbeing of Uni’stot’en territory is under threat from TransCanada’s injunction application, which asks police to force a fracked gas pipeline through our home.”

But the company told APTN News it won’t tear down any buildings.

“It’s important to understand that Coastal GasLink is only looking for access across that public bridge and road,” a spokesperson said.

“Camp infrastructure will remain in place as it is, with those located at the camp welcome to stay.”

The company said the pipeline would be located about one kilometre south of the bridge and not cross through camp.

“We only need to safely gain access to the pipeline right of way to carry out some preliminary work and road assessments before construction activities begin, which will take place approximately one kilometre away.”

The company noted it tried for years to get the Uni’stot’en to the negotiating table.

Something Alexander said a judge would appreciate, while at the same time question why the company went ahead without hereditary approval.

“It was a known risk to try and advance their project knowing they were negotiating only with elected councils,” he said. “It’s one of the largest unanswered legal questions in Aboriginal law right now – how do we reconcile hereditary legal systems with elected council.

“Who is the actual proper decision maker?”