Nearly 1,600 people in Pikangikum First Nation started leaving the community late Thursday afternoon as a forest fire continues to burn out of control.

The Canadian Air Force (CAF) C-130 Hercules transport plane that was dispatched to the remote community north of Thunder Bay was delayed Thursday morning but landed later in the afternoon to begin the evacuation.

The Ministry of Natural Resources says the fire has so far burned away from the community but a wind change is possible and clear weather conditions are making it challenging to get under control.

Ministry of Indigenous Affairs Greg Rickford said he is working closely with the community.

“We will continue to monitor the situation closely and activate the necessary resources to ensure the safe evacuation of Pikangikum community members,“ he said in an emailed statement to APTN News.

Sainnawap expressed frustration over the delay of the aircrafts landing in the community of about 4,000 people.

She was expecting the Hercules to land early Thursday morning.

“Everything was chaos,” Sainnawap told APTN over the phone. 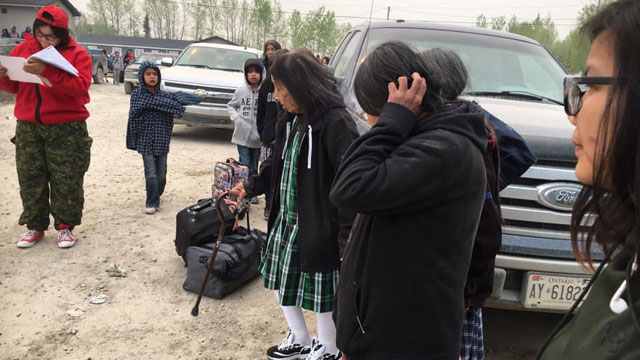 (People wait near the Pikangiukum airstrip waiting for a CAF Herculese to land. Photo courtesy: Dean Angellips from Facebook)

According to the province’s ministry of Indigenous Affairs, the aircraft circled Pikangikum but it wasn’t clear if the plane would fit on the community’s landing strip.

“Specifics for Pikangikum airstrip showed it was too narrow side to side for either landing or ground operations given the plane’s wingspan length, preventing routine landing of the aircraft,” said an emailed statement.

“A  low-altitude inspection was completed and the C-130 was cleared to land. The crew decided they needed to refuel prior to landing and loading passengers.”

“This Ontario request involves the deployment of Canadian Armed Forces personnel to provide transportation support for evacuation of members from the fly-in community of Pikangikum First Nation to a designated host community,” Goodale said.

(A water bomber drops its load on the fire near Pikangikum. Photo courtesy: Mandi Chan Peters)

More than a dozen ground crews, water bombers and helicopters have been deployed by the province as they continue to fight the forest fire which covers about 40 hectares.

The CAF is expected to continue evacuations of high risk community members all day Friday.