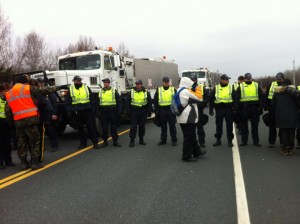 By Jorge Barrera
APTN National News
ELSIPOGTOG FIRST NATION–A Houston-based energy company forced to stop its shale gas exploration work in the face of a fierce Mi’kmaq-led resistance has “tentatively” agreed to a meeting involving the provincial government and its opponents from Elsipogtog First Nation, according to negotiators with the RCMP.

The proposed meeting is expected to happen “sooner rather than later,” said Const. Tara Norman, one of the RCMP negotiators from Saskatchewan, during a Wednesday afternoon teleconference call with Mi’kmaq District War Chief Jason Augustine. Norman said SWN Resources Canada was looking for a “structured meeting” with its opponents.

SWN has been unable to finish its last remaining exploration line which runs along Hwy 11 and sits about 40 kilometres north of Elsipogtog First Nation. Mi’kmaq-led demonstrators stopped the company’s thumper trucks last week.  The demonstrators have also repeatedly turned back SWN’s contractor seeking to collect geophones, which are strung out along 15 km of the highway. Geophones interact with thumper trucks to create imagery of shale gas deposits underground.

SWN, through its contractor, has been trying to retrieve the remaining geophones that have not been damaged or disappeared.  The contractor Geokinetics rolled up Hwy 11 Tuesday, the day after Elsipogtog’s band council lost in its attempt to get an injunction against SWN, but quickly turned back after demonstrators appeared.

Norman was attempting to use the prospect of the meeting to entice Augustine into letting the company retrieve its geophones.

“I know you want to have this come to a peaceful resolution,” said Norman. “I do think in agreeing to meet SWN and the government, then maybe a good sign of faith on your part would be letting this equipment go again.”

Augustine, however, said the people would only allow SWN to collect the equipment if the company agreed to leave the region once it had it piled into the back of its trucks. He said he had been trying to reach SWN to speak to them about the proposal.

“Mi’kmaq people are used to this kind of weather because it’s going to be a long winter if they don’t want to pull out,” said Augustine, who was speaking on the teleconference from a home in Elsipogtog.  “We are not going to back down, this is our water we’re talking about here.”

Norman said she didn’t know if SWN planned to pull out for good, but that the issue was likely in the hands of the company’s executives in Houston.

“I will never lie to you…I don’t know what their plans are. We are working to see if their intentions are to pull back for the rest of the year,” said Norman.  “I pray that they do call back.”

SWN’s equipment has been at the centre of the most heated confrontation between the RCMP and the Mi’kmaq over the last several months of demonstrations throughout the region over the exploration. The Mi’kmaq-led coalition, which includes Acadians, wants to stop the exploration work before it evolves into the extraction phase which involves hydraulic fracturing, or fracking. SWN’s equipment was at the centre of the Oct. 17 raid that saw heavily-armed RCMP tactical units sweep in on the Mi’kmaq Warrior Society which were anchoring a camp blocking a compound holding the energy firm’s exploration vehicles.

The RCMP raid freed the machinery and led to 40 arrests along with the torching of several police vehicles. The RCMP maintains it conducted the raid over public safety concerns alleging that individuals at the camp were becoming aggressive. The RCMP said it seized three rifles, ammunition and crude explosive devices from the camp which were displayed at a press conference.

While Augustine, as a result of his conditions, currently remains in the background, he still maintains a leadership role in the ongoing battle with SWN.

It also appears that the RCMP’s J-Division, which patrols New Brunswick, has brought in negotiators from outside the province to deal with the Mi’kmaq.

Seasoned Aboriginal policing consultant Jim Potts was also on the call with Norman. Potts has been in Elsipogtog for about a week. He had already been giving periodic advice to the RCMP on the ground. An RCMP officer for 36 years and an OPP officer for nine, Potts has been involved in some of the major conflicts involving First Nations people, development and provincial governments including Oka, Ipperswash and Caledonia.

“I worked for 15 years with the Mohawk Warriors. We built a trust with each other,” said Potts, during the teleconference. “Nobody is going to lie to you from here.”

Potts also suggested that the weather and the looming winter may be working against SWN’s exploration work.

“The frost is coming on the ground, etcetera. They are a week away from a heavy snowstorm, probably,” said Potts.

Provincial Premier David Alward has thrown the full weight of his government behind seeing SWN finish its exploration work. Alward has called the battle between the Mi’kmaq-led coalition and SWN as a “beachhead” that could determine the fate of upcoming energy projects slated for the cash-strapped province. TransCanada is hoping to link its proposed Canada East pipeline, which would transport Alberta bitumen, to Irving Oil’s refining and shipping infrastructure in Saint John, NB.

Mohawk Warrior, Mi’kmaq and Acadian flags flew straight and flat as a cold wind blew through the demonstrator’s camp on Hwy 11. A surveillance airplane circled overhead at low altitude. At one point in the late morning, an RCMP cruiser slowed to a crawl at the entrance to the camp, triggering horn blasts from the demonstrators in their vehicles escaping the windchill.

Minister says damages for 60’s Scoop will be dealt with ...