“I’ve seen some artifacts when I use to live in Edmonton. At the zoo they would have stuff that was embedded in the rocks you could touch, but I never actually got to hold it and was never told what it was,” Martin said.

It’s the first time the 18-year-old has come in contact with a collection of ancient Indigenous tools used in her traditional homelands.

Keen to learn and make up for lost time, Martin didn’t grow up with a how to guide or history lesson on her Inuvialuit and Gwich’in Dene roots.

Now she’s fearful she may never get the chance to as she and youth across the north inherit the tragic climate change.

That’s because in the circumpolar north, permafrost is melting at an alarming rate, making the earth susceptible to heavy rains and landslides that erode the ground.

Youth from the Young Leaders Climate Change Summit, are at Aurora’s research Institute in Inuvik, Northwest Territories (NWT) to learn from scientists studying everything from the effects of permafrost thaw slumps on carbon cycling in water to what artifacts are at risk of being lost during thaws.

Students are also at ground zero when it comes to seeing the effects first hand.

Archaeologists at the institute are calling the Mackenzie Delta one of “the most threatened areas in terms of climate change.” 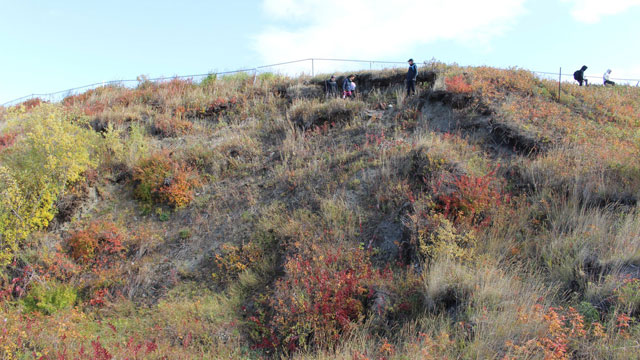 (Permafrost, made up of leftover ice from the last glaciation, frozen for thousands of years now slumps disturbing the grounds intengrity by settling proportionally to quantity of ice underneath. Photo courtesy of Ecology North)

As is true for most areas in the Arctic, the impact of modern climate change is heightened by the fact that most past Indigenous settlement occurred along the coasts.

These are situated where erosion is severe like the pre-contact bowhead whale hunting sites at Nuvugaq on the Tuktoyaktuk Peninsula or  the early Thule Inuit site of Washout of Herschel Island.

Both have already been completed destroyed by erosion.

History and artifacts like homes, tools and even bodies locked in ice can and have been be taken out in a single storm. 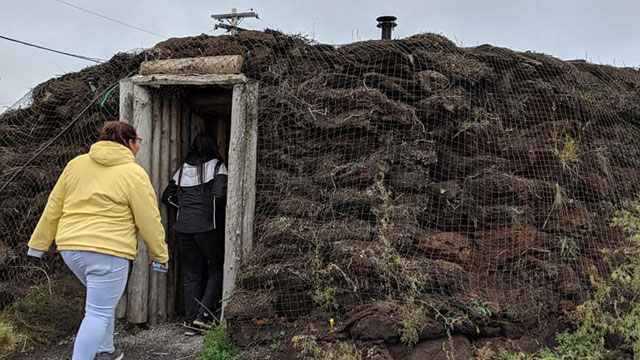 Using Indigenous guidance on the land when uncovering archeological sites is of paramount importance and builds relationships among scientists and Indigenous stakeholders – helping bridge the gap between western and traditional knowledge.

However, Martin is fearful the changing climate will stunt the ability for Indigenous knowledge to be shared with scientists and hinder traditional knowledge exchange between elders to youth.

Each artifact demonstrates how tactile the Inuvialuit have adapted to changing landscapes, and sustainably harvested food. 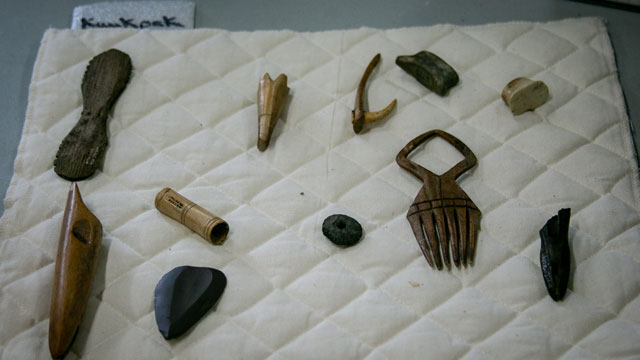 (According to officials, it’s not just what is found but the placement of where it is found which hold clues into the past. Like a hair clip that was not used for function so much as it was for style. Photo: Charlotte Morritt-Jacbs APTN)

The Inuvialuit were able to thrive on-the-land leaving only carefully contained settlements behind.

According to Martin, the same protocol should be applied in all steps taken to combat climate change.

“Only taking what you need. Not just taking it because you want more. Take only what you need because some of the stuff up here is not limited but distinct,” Martin said.

Drying up and melting away

The Arctic is being used as an exemplar for the world to measure the pace of change. But for the youth who live in the north the realities of global warming are tangible, beyond fact and figure, with swift and unforgiving consequences. 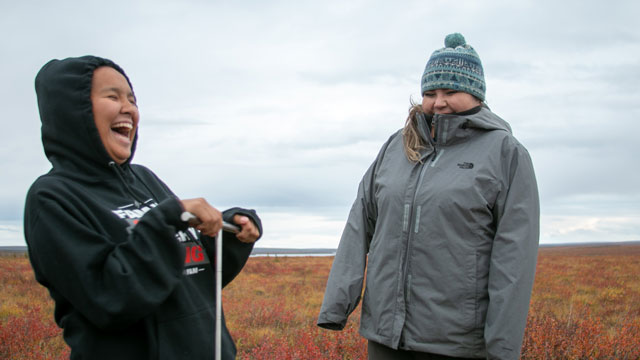 Hannah Taneton, 23, is from Délįne in the Sahtu region of the NWT.

Permafrost underlies most the area which has a profound effect on the landscape and ecology of her community.

“Back in the day our prophecy said there was going to be a big change in water. We were told to watch our water. Great Bear Lake is the heart of the water. Lately the water levels are going lower. We are seeing different fish and don’t have a long winter road,” Taneton said.

Délįne is one of six NWT communities completely isolated and dependent on ice road.

“It scares me to know that water is disappearing. Lots of rivers and lakes are drying out. I grew up on Great Bear Lake. Our ancestors told us to always take care of it. For it to get contaminated or just start drying out, that scares me” she said.

Youth at the summit spoke up about how large corporations and governments in the past have marketing responsibility at the individual and consumer level with regards to climate change.

A convenient tactic for that Susan Machan is tired of.

“I really feel that if you aren’t a middle aged white man you aren’t listened to for national decisions. I’m hoping it’s getting better. We just have to make our youth voices louder,” said Machan.

While all the participants agree that everyone on the planet needs to reduce their carbon footprint, no one person can stop rising temperatures and this ideology should not deflect attention from big business’ roll in greenhouse gas emissions.

Machan is a Tłı̨chǫ Dene from Yellowknife and newly graduated as a geologist.

As a delegate at the summit she’s adamant when it comes to applying pressure to government bodies who employ a large amount of the populous.

She wants politicians to hold minding companies the other big employer in the north accountable for their contribution to climate change. . 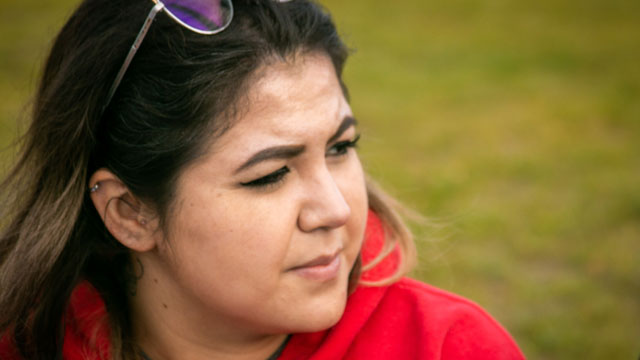 (Susan Machan, a geologist and climate change summit says that sometimes it is hard to get the message out about climate change. She has had to work to convince her family who work in oil and gas that climate change is real. Photo: Charlotte Morritt-Jacbs APTN)

“I’m just kind of worried what kind of state they will leave the mine when they abandon it. What happened with Giant Mine shouldn’t have happened in the first place. We have 237,000 tonnes of arsenic trioxide dust and the permafrost is melting. It won’t even stay frozen,” she said.

With high costs of living and a lack of formal educational opportunities, Machan is partisan in matters effecting resource development. But she is a proponent of strengthened environmental safeguards.

The territorial government has jurisdiction over the extraction of resources that are extracted and whether they are used by the people of the north or shipped out of the territory they are extracted to be burned and will ultimately contribute to global warming.

“Climate change is happening and I am hoping to get into the mining industry. But, that is more just because mining is such a big part of the Tłı̨chǫ  community. We have Diavik and Ekati diamond mine, so many of our people are working there, with jobs. It benefits the community. I do realize we do have to take better care of the earth but we can’t just stop mining. We wouldn’t have anything else to replace it,” Machan said.

Overall the visit to the Aurora Research Institute was informative and gave the youth a chance to flex empathy muscles as they gained a better understanding on the race against time to preserve northern knowledge in archeology.

“I thought that maybe local kids were just not interested in learning their own culture here. Why aren’t they passing on their traditions. But having the environment change like that where they are losing so many artifacts and when evening looking for the proper rock to make an ulu, is too hard… I am kind of sad that this is happening to them,” Taneton said.

1 thought on “You can’t dig up what’s no longer there: Archeology and a melting permafrost”