Kim Campbell-McLean, right, joined the Indigenous-led occupation of Muskrat Falls in October 2016. She said watching video evidence being used against her in court this week “reconfirmed to me and reiterated that we did the right thing for our peoples.” Photo courtesy TheIndependent.ca

Labrador land protectors appearing in court this week say they resisted the Muskrat Falls hydro project out of a sense of duty to their ancestors and to future generations, and that those responsibilities justified their decision to demonstrate on and near the dam site despite a court order prohibiting them from doing so.

Seventeen protectors, almost all of them Indigenous, sat quietly and watched evidence presented against them by a lawyer representing Nalcor Energy, the provincial crown corporation building the controversial mega dam.

Just a few metres away, away attorney Chris King played videos and called witnesses, all of them security staff working on the Muskrat Falls site, to identify the individuals who Nalcor says were in contempt of court and guilty of breaching the injunction.

During the full day of evidence in what’s scheduled to be a week long trial land protectors often smiled as they watched themselves and their companions protest what they say is the irreversible destruction of the lands, waters and traditional foods Innu and Inuit communities downstream depend on.

All 17 of them are pleading not guilty to the civil charges. Some also face criminal charges.

“I don’t believe I’m guilty of anything. As far as colonial law [goes], I understand what an injunction is and those sorts of things, but from an Indigenous perspective of the values and Indigenous laws that I hold a responsibility to, I am not breaking any of those,” Denise Cole, a Southern Inuit land protector, told APTN outside the Happy Valley-Goose Bay courthouse Tuesday.

“If anything I’ve been upholding those. And that’s what’s lead me to be in trouble in colonial courts, because I put my indigenous laws and values and way of life and responsibilities ahead of the colonial rules of law.”

Kim Campbell-McLean, an Inuk woman from North West River, told APTN watching footage on Monday of the Muskrat Falls occupation, which took place exactly two years ago this week, “brought back a lot of memories and emotions.

“We were peaceful. We did ceremony. And we stood up and made people listen.”

Mark Gruchy, a St. John’s lawyer representing the land protectors, said Nalcor is expected to close its case by Wednesday or Thursday, after which time he will present evidence relevant to the allegations against his clients.

After that, potentially by week’s end, Supreme Court Justice George Murphy may rule on whether contempt has happened.

Gruchy said Nalcor must first prove that each land protector knowingly contravened the injunction order that was in place.

If land protectors are found guilty, sentencing will follow. 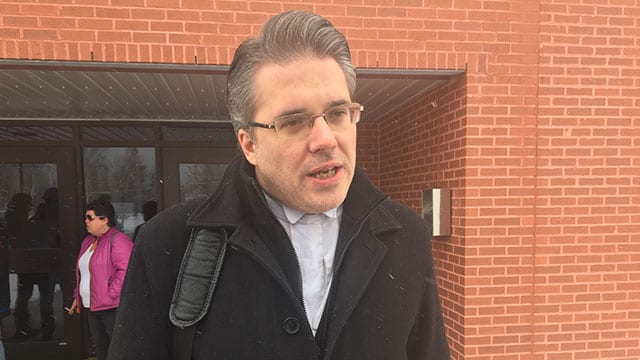 Mark Gruchy, a lawyer representing land protectors in court, says “we should all be paying attention to [the land protectors’ resistance to Muskrat Falls] as a society.”

The response by the group, largely comprised of Inuit and Innu locals, to the risk of methylmercury exposure through their country foods—as well as other health and safety concerns—is historically unique in the province of Newfoundland and Labrador and should be given serious attention, Gruchy said.

“What you see in this particular scenario is a very broad and diverse group of people who are representative of all the Indigenous groups in this region, as well as the settler population, who appear to be acting, and are acting, on their own in a grassroots way.

“That really speaks to what’s actually happening right now in this part of the country, I think,” he continued.

“What we see here is a grassroots group flowing from all of those groups, acting on their own, which to me suggests me there’s some sort of disconnect there between what these people and many other people are experiencing and perceiving, versus the [formal] leadership.

“I find it interesting because it’s exactly that sort of thing that I think tells you in a social sense where the fractures are and where the strain is. And I think we should all be paying attention to it as a society.”

Cole said she sees the land protectors’ resistance to—and their determination to continue that resistance through their not-guilty pleas—an energy project that threatens their peoples’ ways of life as an early sign of decolonization in the region.

“Unfortunately we haven’t completely decolonized, we’re only starting as a society or as a country,” she said.

“I’m not sure that I believe the colonial courts will agree with my Indigenous perspective, so for me standing tall in the face of this colonial oppression is already a win, already a success, to my ancestors and to the next generations.

“I’ve upheld my responsibilities and I can walk in or out of this courtroom proudly knowing that I’ve done that.”

King declined an interview request for this story and suggested APTN reach out to Nalcor communications team.

APTN did not receive a response by the time of publication.

Hearings resume Wednesday morning and are scheduled to run the rest of the week.