A new poll commissioned by APTN shows candidates can still win over Indigenous voters by making good on the concept of reconciliation.

“More than half or one in six are undecided,” said Sarah Roberton, vice-president of corporate and public affairs, at Environics Research in Ottawa.

Indigenous peoples comprise less than five per cent of Canada’s population but their vote helped propel Liberal Leader Justin Trudeau to victory in 2015.

Now, that isn’t the case.

“Intention to vote Liberal has dropped substantially,” said the poll.

“Conservatives and Greens have retained most of their 2015 support. Almost half of those who previously voted Liberal would now vote for another party.”

The survey of 1,024 Indigenous peoples in all provinces and territories was conducted for APTN between September 4 and 13

“One in five are planning to vote Liberal in the current election, down from half who reported voting for the Liberals federally in 2015,” the poll found.

Roberton noted the results show support for the Liberals was down even before Justin Trudeau’s blackface scandal.

“Those who feel they could change their mind tend to favour the NDP or Greens as a second choice,” the poll said.

Three-quarters of those surveyed said “truth & reconciliation issues” are very or extremely important in deciding their vote.

For the purpose of the survey, those issues were treaty rights, Aboriginal title and the subject of missing and murdered Indigenous women and girls.

Survey respondents see little difference between how the parties treat other issues important to them like the environment, quality of life, and economic problems.

“However, belief that is does not matter which party wins because they’ll take the same approach to the environment and to Truth & Reconciliation is higher among Conservative supporters than supporters of other parties,” the poll said. 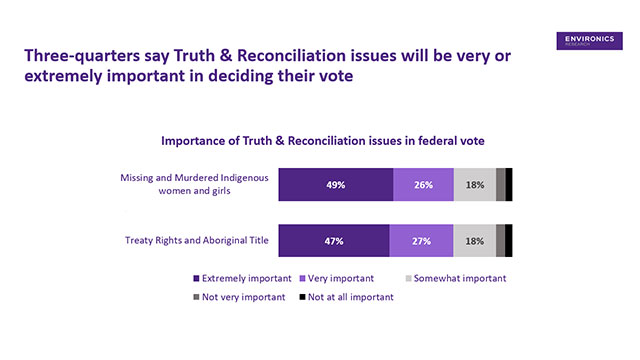 Roberton said the polling sample was comparable to other election surveys.

“A thousand interviews with any group in Canada is a more than adequate sample size,” she said in a telephone interview from Ottawa

“We’re confident standing behind the results.”