Kwanlin’ Dun First Nation Elder Louie Smith has spent most of his 86 years living and learning on the land.

When Smith was a child an outbreak of tuberculosis at the school in Carcross, YT, forced Smith’s father to remove him from class.

Louie only spent two weeks at the school and never learned how to read.

“A lot of kids died there,” says Smith. “You play around today and tomorrow you already die in the Carcross school.

“So that’s why I never went to school”

(Ted Ackerman and Louie Smith spend two days a week at the House of Learning reading, sharing stories and history with each other. Photo: Chris MacIntyre/APTN)

Louie always wanted to learn how to read.

He says that once you learn to read, you can learn to sing.

When Smith reached his 80s , a family member suggested he register with Yukon Learn – a not for profit agency whose mandate is to help Yukon adults improve their literacy.

Ackerman had been volunteering with Yukon Learn since 2013 and was excited at the opportunity to work together with a First Nation Elder.

For the past four years, two times a week, Louie Smith and his tutor Ted Ackerman spend their mornings surrounded by books at the House of Learning building in Whitehorse.

Their reading lesson always starts off with a cup of fresh coffee and usually a story from Smith’s childhood.

Smith isn’t the only one learning at these weekly tutoring sessions.

Ackerman is also on the receiving end. 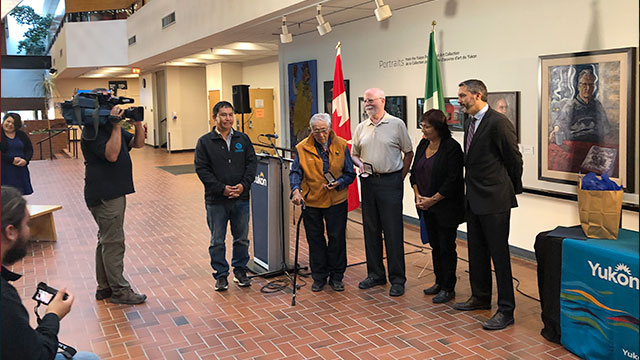 Smith shares his stories and history of First Nation’s culture and has been teaching Ackerman words in Southern Tutchone.

Ackerman says being able to teach and at the same time learn is a rich experience.

“Literacy is not just the reading and writing, that’s a large part but it’s also the understanding of knowledge of the world around you,” he says.

“Louie is highly literate in Yukon First Nation culture and he shares that with me.”

Recently Smith and Ackerman were presented with the 2019 Council of the Federation Literacy Award.

With permission from the Kwanlin’ Dun First Nation, the pair have preserved over 100 items of First Nations history through recordings and books.

There are no plans to stop the tutoring sessions and Smith has even said that he’d like more.

Through the time spent together, Smith continues to learn how to read and Ackerman gets a greater understanding of First Nation culture.

“I’ve read the Truth and Reconciliation report and I’ve read the Together Today for our Children Tomorrow and both of those documents talk about sort of what the institutions and the organizations of our cultures and country need to do to help our cultures co-exist,” says Ackerman.

“I think if there’s a lot more of me and Louie doing things we wouldn’t need those big documents as much”.