Increasingly, Indian Act bands are turning to an ancient form of justice called banishment to tackle a modern day struggle with drugs.

The chief and council in Tobique, a Wolastoqiyik (Maliseet) community in northwestern New Brunswick, unanimously passed its banishment bylaw in 2017.

A fentanyl-related death in a Mi’kmaw community sparked fear in First Nations throughout the province.

Leaders in Tobique rounded up pills that were circulating around the reserve and found traces of the deadly opioid. 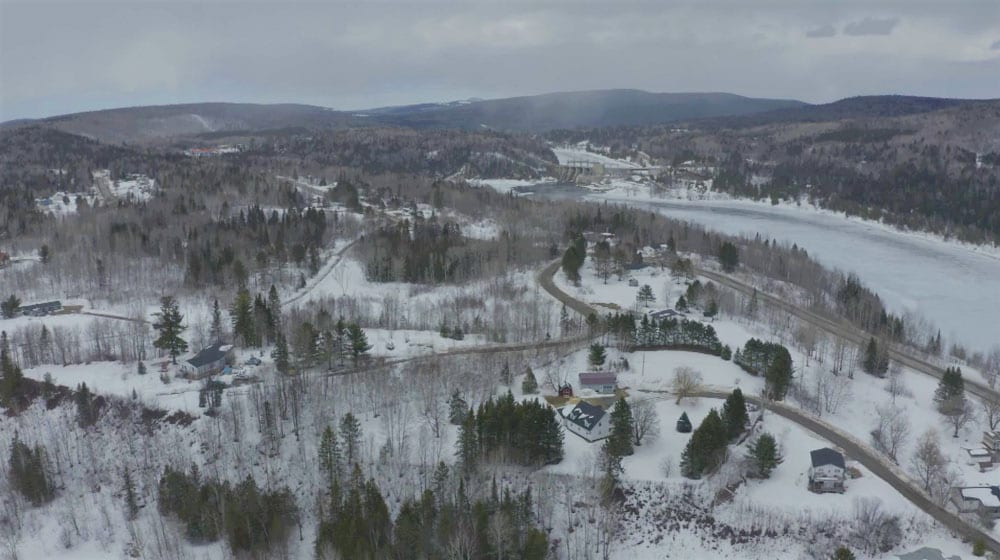 (Tobique from the air. The community has banished about a dozen non-members because of drugs)

“A majority of our younger deaths, people under the age of 60, were related to pills and other drugs. So we knew it was a real problem,” said Chief Ross Perley.

“The purpose of the banishment law is to hopefully deter potential dealers from getting involved in that criminal activity that can get you banished from your community, from services, from your families for extended periods of time.”

“Tired of my people being killed over pills,” said Randy Perley, a member of the Tobique Tribal Security team.

In part, the security team ensures community safety – but they also enforce the banishment bylaw.

“I’m not a cop. I don’t arrest anybody. I don’t charge nobody. I don’t take anybody to jail,” said Perley. “Once I’m given the word to basically remove somebody, I’ll do it. It’s what I’m being paid to do.”

But in the tight-knit community, everyone here is friends or family so Perley will only remove non-band members.

So far, he’s kicked close to a dozen people off the reserve.

Tobique has yet to banish one of their own.

“I’m pretty sure that’s going to be a deterrent for some to quit selling,” said Perley. “But what they have to do is they need to start with one person, I guess. To banish them from the reserve for it to really take effect. If they don’t do it, then what’s the use of having it?”

Perley makes his rounds, pulling in to the parking lot of Tobique’s entertainment centre to watch the cars driving in and out of the reserve on the main road. If he sees an unfamiliar car, sometimes he’ll follow them.

Enforcement of the bylaw is challenging

“The law is a very dull knife in which to cut away or hack away at society’s problems,” said Tuma Young, a Mi’kmaw lawyer in Nova Scotia.

“A law on banishment is not going to do away with drug dealing or drug use in our communities,” said Young. “That’s just one dull knife to use to hack away with it. And it may cause more damage than what is intended.”

Young is also an assistant professor of Mi’kmaq Studies at Cape Breton University.

“Traditionally, you would be dooming the person to die,” said Young. “Whether it’s a spiritual death, emotional death, a mental death or even a physical death.”

Banishment is a legal concept used by Indian Act Bands that would see a community member exiled or left behind.

Young raises questions as to how banishment will work in a modern context.

He said most people are selling drugs to feed their own addiction.

“And if we look at it from…a wellness or medical model approach,” said Young, “you’re basically looking at applying the law of banishment to people who are sick.”

Banishment may be at odds with a restorative approach to justice.

In Tobique, a non-band member can be asked to leave under the band’s Trespass Act if chief and council deem their behaviour harmful to the community.

Perley has kicked off people suspected of drug dealing, or anyone abusing women or children.

For band members, they can only be banished if convicted of a crime.

The decision will be made by a council of Elders and eventually, the person can ask to come home.

Young points out that if a person is convicted in the Canadian legal system and also banished, “the punishment received by that Indigenous person may be twice as hard as what a non-Indigenous person would receive.”

Tobique has a wide range of services aimed at health and wellness.

There’s a renewed focus on creating education and employment opportunities; all in the hopes of creating a positive, healthy environment that will erase the need for banishment.

“I believe that the alcohol and the drugs are just symptoms of a deeper problem,” said Edward Perley, who has lived in Tobique his whole life.

He’s a former police officer and band councillor and part of a team that responds to crises in the community.

A recovering alcoholic himself, he said addiction touches everyone in a community where people are all friends or family.

“It really hits home because even right to this day, I have family that still actively use,” said Perley. ”And sometimes I guess you have to, you know, apply some conditional love. Is banishment the way? I don’t know. Sure.”

“This our home. And you know, people should feel safe. And when somebody comes in and jeopardizes the safety and the comfort of the members then, you know, they could be asked to leave.”

When asked if the banishment bylaw has made a difference yet, Chief Ross Perley said it’s too early to tell.

“I think the law is still yet to be tested.”