Three Mi’kmaw women have been arrested in an early morning raid by the RCMP at the Alton Gas site in Nova Scotia.

The RCMP said they moved in to enforce a court injunction at the site.

“We all need water to live. This is not just a Mi’kmaw issue, this is an issue for all Nova Scotians,”  said Michelle Paul, a Mi’kmaw water protector.

A small group of water protectors, allies and the media showed up on the road that leads to the site.

The RCMP blocked the road – including denying access to journalists.

“The RCMP has closed the road for police and public safety reasons we feel that’s in everyone’s best interest,” said Cpl. Jennifer Clarke. “I understand there will be some people who are not happy with that however, this is what we have determined to be the best course of action at this particular time.”

When asked, Clarke couldn’t say what the threats to public safety were.

(Media, including APTN News, was kept from reporting on the arrests when the RCMP closed the road leading to the Alton Gas site. Photo: Trina Roache/APTN)

Three people were arrested at the project site.

“When I arrived here all the road was blocked off and I immediately jumped out the car ran over to run up the road and the officers came over and told me I’d be charged with obstruction,” said Paul.

No official word yet on who was arrested or what the charges are.

The Mi’kmaq have occupied a camp at the entrance to the Alton Gas site since 2017.

And Mi’kmaw grandmothers have maintained a steady presence there since a temporary court injunction was issued last month.

For years many Mi’kmaq have opposed the project.

They’ve voiced their concerns over the environmental impacts of the Sipekne’katik River.

The Alton Gas project plans to hollow out underground salt caverns using water pumped from the river – and then dump the salty discharge back into this tidal estuary.

Jolene Marr says it’s not the Mi’kmaq who pose a threat here.

“It’s not any one human being there. It is what Alton Gas is here to do is what the real public safety issue is,” said Marr, who lives on the unceded territory.

“And everybody across Nova Scotia needs to understand that.” 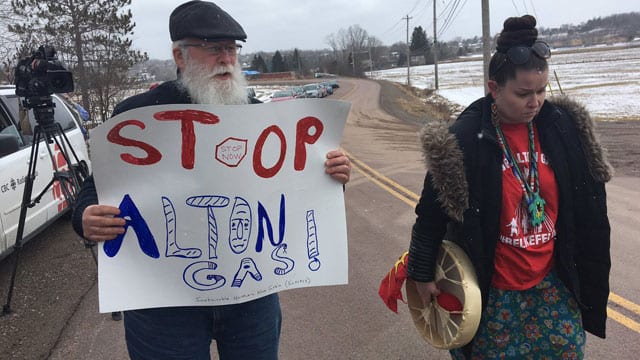 (Stop Alton Gas protesters arrived at the scene but were blocked from accessing the site. Photo: Trina Roache/APTN)

The Nova Scotia government has given the project the green light.

And says measures are in place to protect the environment.

But Mi’kmaw water protectors are not convinced.

“We’re not going to let up on our resistance. We’re going to continue resisting this project,” said Paul.

The Mi’kmaq have a rally planned for Wednesday evening at Nova Scotia’s Province House.

When asked for a comment, Alton Gas said the court injunction offered the company with “safe and unobstructed” access to the site.

“We respect the right to peaceful protest, but for safety reasons, the work site itself is open to Alton employees and approved contractors only,” said Alton Senior Advisor Lori McLean. “We are committed to working with government, the Mi’kmaq of Nova Scotia and local communities on the next steps regarding development of the Alton Natural Gas Storage Project.”