(Some of the hereditary chiefs of the Wet’suwet’an Nation address a new conference Tuesday. Lee Wilson/APTN)

On the one-year anniversary of “the siege” on their traditional territory, Wet’suwet’en hereditary chiefs continue to oppose a natural gas pipeline project in northern B.C.

The chiefs held a news conference Tuesday in their office in Smithers, B.C., where they detailed reasons why construction of the $6.2-billion Coastal GasLink (CGL) pipeline violates their traditional laws and unceded territory.

“The world is watching; the United Nations is watching,” said John Ridsdale, who also goes by the hereditary name Chief Na’moks.

“This is not just the Wet’suwet’en.”

Construction has already begun on the 670-km route from northeastern B.C. to Kitimat, and the company recently obtained an expanded court injunction protecting its work sites.

The pipeline will run through 190 km of Wet’suwet’en territory, which last year at this time was the scene of a violent confrontation with the RCMP.

Mounties in paramilitary uniforms stormed a checkpoint erected by Gidimt’en south of Houston, B.C. – what they now call ‘the siege’ – after the company complained the checkpoint blocked its access and violated a court-awarded interim injunction.

Police arrested and charged 14 people at the checkpoint. Those charges have since been dropped.

To avoid further violence at the Unist’ot’en clan’s healing centre and homestead further up the Morice River Road, the chiefs signed an agreement giving the company limited access to the remote area and asking RCMP to keep an eye on both parties.

Unist’ot’en is affiliated with Dark House, one of 13 Wet’suwet’en Nation hereditary house groups.

In exchange they removed the barricade erected outside the healing centre comprised of lumber, barbed wire and vehicles. 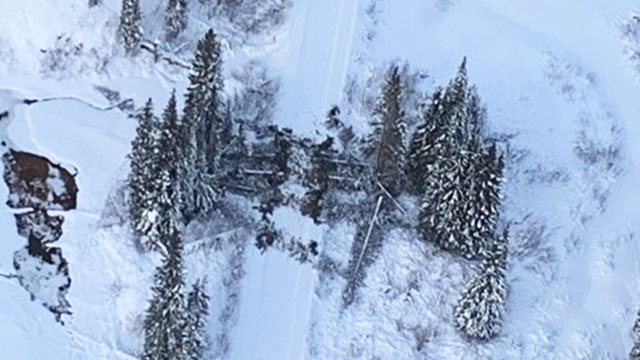 (CGL posted this photo to its website Tuesday showing trees that were felled. CGL photo)

The chiefs have since given the company notice they are withdrawing from that agreement effective January 10.

While the signs appear to point to a repeat of last year, Na’moks said there is “no barricade” up that would stop CGL.

The company, meanwhile, is hoping for a peaceful resolution.

CGL said in a statement Tuesday it has requested a meeting with the hereditary chiefs to “resolve the issues at hand.”

It said its security people vacated the area on the weekend following an eviction notice from the clan. But added that work on the pipeline right-of-way is restarting this week.

“We believe that dialogue is preferable to confrontation and will delay re-mobilization near Workforce Accommodation site 9A while engagement and a negotiated resolution remain possible,” it said in the statement.

“Coastal GasLink has informed the Unist’ot’en that we will periodically need to visit sites in and around site 9A for safety and environmental reasons while the accommodation site remains unoccupied.”

In the statement the company noted trees had been cut down after its security left, which violated the  injunction.

APTN News observed an increase in RCMP personnel in Smithers and asked the force about it. 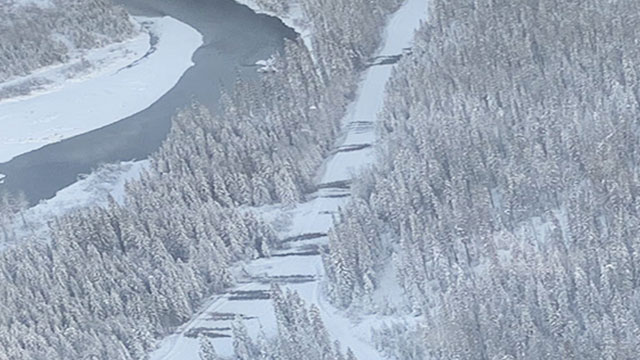 (CGL estimated 100 trees were cut down on the weekend. CGL photo)

“Due to operational considerations, we are unable provide any comment regarding police resources and deployment at this time,” Cpl. Madonna Saunderson said in an email late Tuesday.

They are among 20 along the pipeline route that have accepted undisclosed payments – also known as pipeline benefit agreements – from the company and B.C. government in exchange for supporting the project.

The agreements include offers of skills training and employment, which many Indigenous leaders have said cash-strapped First Nations can’t afford to turn down.

On Monday the United Nations waded into the dispute.

Its Committee on the Elimination of Racial Discrimination called for work to stop on the LNG pipeline, the Trans Mountain pipeline and the Site C dam, which is also in B.C.

Committee members said they were disturbed by the “forced removal, disproportionate use of force, harassment and intimidation” and “escalating threat of violence” against Indigenous peoples who oppose such projects.

The members, who are described as experts, were also concerned with how these projects were proceeding without the free, prior and informed consent of impacted Indigenous groups.

With files from Canadian Press

1 thought on “‘The world is watching’: Wet’suwet’en hereditary chiefs explain why CGL has to go”