Indigenous leaders and allies gathered on Parliament Hill Monday to express concerns over Indigenous legislation that is making its way through the House of Commons, and the Senate.

It’s being called the national day of action against Canada’s termination agenda.

At the heart of the protest are pieces of legislation dealing with Indigenous child welfare, and Indigenous languages. Bills C-91 and C-92 are anticipated to receive royal assent next month.

Chief Lee Crowchild of the T’suut’ina First Nation says he wants people to educate themselves on the proposed legislation.

“I think this day of action, this reality that’s taking place across Canada is a wakeup call for the generations that we can’t just sit idly by,” said Crowchild.

One of the issues with the proposed legislation is funding.

The Indigenous Child welfare act is supposed to help Indigenous communities gain jurisdiction over child welfare, but money will still be funneled through the provinces.

Indigenous leaders say their people should be creating their own child welfare laws.

“We as first nations are in the process of our own. Developing our own law, and this law on childcare is pending. So in essence we know what the problem is, and we will know how to fix,” said Chief Lewis of Onion Lake Cree Nation. 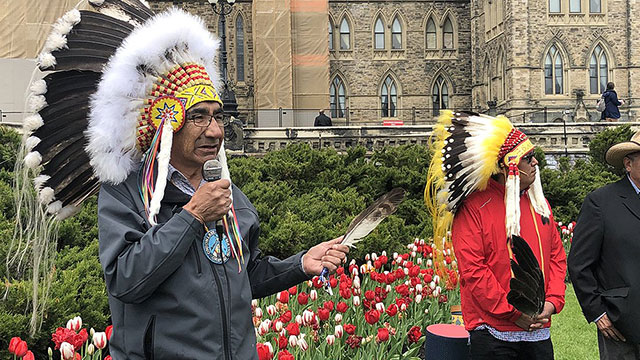 The recognition and implementation of Indigenous rights framework, developed by the Liberal government, but killed late in 2018, is also under scrutiny.

It is being compared to the 1969 White Paper that was released by current Prime Minister Justin Trudeau’s father Pierre Elliott Trudeau.

It aimed to dissolve the Indian act and assimilate status Indians into Canadian society.

The framework promises to support indigenous communities working towards self-governing nations but critics say it looks all too familiar.

“It is steeped in what everyone is referring to as the White Paper 2.0,” Crowchild said.

More rallies like this are planned throughout the summer by Indigenous leaders and grassroots organisations, leading up to the fall federal election.