For generations, Labrador and his family, who are from Kespukwitk in traditional Mi’kma’ki territory, have been making birch bark canoes.

But he says Mother Nature is changing – there are fewer trees and animals.

“When I would harvest, you knew from the fire flies came out in June, after that you would harvest summer bark,” says Labrador.

Today he has to adjust his teachings.

There are fewer fire flies, the birch bark is dry and there is no sap.

“You open that bark up, inside should be really wet, your hands should be orange because of the sap if you look at that bark now, it is so dry, it’s extremely dry,” says Labrador.

(Todd Labrador, traditional Mi’kmaq canoe maker in his workshop. He learned how to make canoes from his great grandfather’s knowledge, and says he is continuing the tradition. Photo: Angel Moore/APTN)

He says he has noticed over the years that trees are dying from the top down and he is not sure of the cause.

“We always had a challenge finding bark because of the deforestation and a lot of the trees, you’ll find the trees are dying they’re not really that old but they’re dying,” says Labrador.

She worries whether the family will be able to keep their traditions alive.

“In all honesty, my father could very well be the last of the canoe builders that is able to harvest locally and carry on his art,” says Melissa.

Her family continues to harvest bark, but every season it is harder to find the right tree.

“Another five or ten years are we even going to be at the point where we are collecting birch bark still are the trees going to be dead at that point,” says Melissa.

Melissa’s children, Nauggy and Teppy are the next generation that will keep the tradition alive.

They help their grandfather scrape, peel, and roll the bark for a canoe they will build next summer.

Nauggy and Teppy connection to the woods runs deep, to their ancestors.

“I’m really helping the spirits and my ancestors come and help and get the birch bark,” says Nauggy.

Melissa hopes her children will be able to share the knowledge of Mi’kmaq tradition to their children, but traditions are adapting to stay alive.

“So, you know as climate is changing and its changing so quickly, locally, globally, as well, that I find having to be a little ahead of Mother Nature on how you plan is becoming a challenge too,” says Melissa. 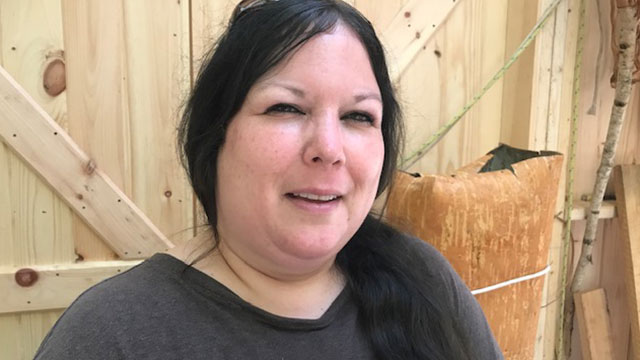 Todd Labrador is trying to adjust, but he says every season the changes are more significant.

He says the seasons are mixed up.

Everything in the forest is about a month late, and fall is coming early so there was not much of a summer.

And it is affecting how he harvests bark.

The bark harvested will be put in storage till next year to build a traditional Mi’kmaq canoe.