As graduation time nears, some Elders in Alberta are preparing gifts to give Indigenous graduates.

At the Grande Prairie Regional College (GPRC), Elder in Residence Loretta Parenteau-English will be presenting students with red stoles and the sacred seven teachings written on deer hide.

It’s a gift to honour all students, Indigenous and non-Indigenous.

But Parenteau-English would prefer to present all Indigenous graduates with an eagle feather.

“It’s an honour in their achievement,” she said.

“They’ve surpassed whatever obstacle that stood in their way while they did their academic studies.”

Parenteau-English said the eagle feather stands for life and accomplishment.

But a piece of legislation in Alberta doesn’t allow Elders to gift eagle feathers to all Indigenous students – only those with Treaty status. 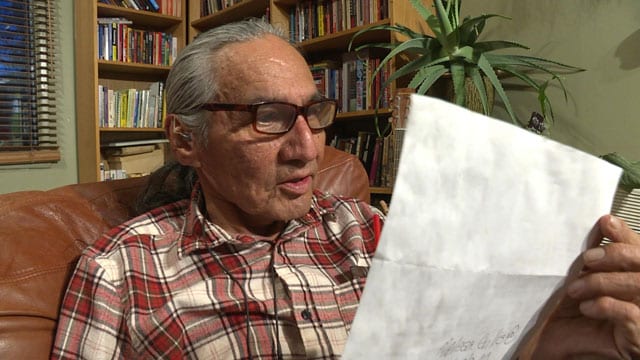 When Calgary Elder, Patrick Deranger applied for feathers to gift high school graduates in 2018, he received a letter from Alberta Fish and Wildlife that stated his application does not show the students have recognized constitutional protected Aboriginal rights.

The application requires a list of the students’ Indian status registration numbers, leaving out non-status and Metis students.

“You guys [the government] made the rule, who is status and non-status. We don’t see that rule. We’re all the same family,” Deranger said.

“It really disappointed me I can’t give that feather to our kids. We’re really proud of our kids. It’s a real struggle for our youth to kind of aspire to complete their grade 12.”

“For our grandparents and great grandparents, they weren’t even allowed to attend this institution. Being able to graduate is kind of reclaiming the space that was denied to our grandparents.” Caines said at the on-campus friendship centre.

“For most of the Indigenous students here, they’re graduation has to do with their communities. So having that cultural significance ties it back to why they’re here in the first place.”

They often check in to see if the regulation has changed.

“The government gets to decide who receives eagle feathers rather than an Elder deciding that,” Benning said.

“And to me that doesn’t sit right” 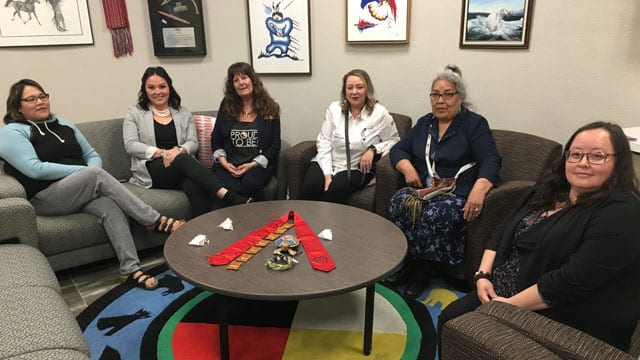 (Kelly Benning, third from the left, Casey Caines, fourth from the left and Elder Loretta Parenteau-English, second from the right at the GPRC friendship centre. Photo: Tamara Pimentel/APTN)

In 2016, Prime Minister Justin Trudeau received a headdress while visiting the Tsuut’ina Nation near Calgary.

“Justin Trudeau got a headdress, Rachel Notely recently got a headdress. You guys [the government] made the policy, you guys go after Rachel Notley for those eagle feathers. That’s not right,” he said.

“We’re proud of our kids. We want to push our kids to evolve and aspire and to dream. You literally took that dream away.” 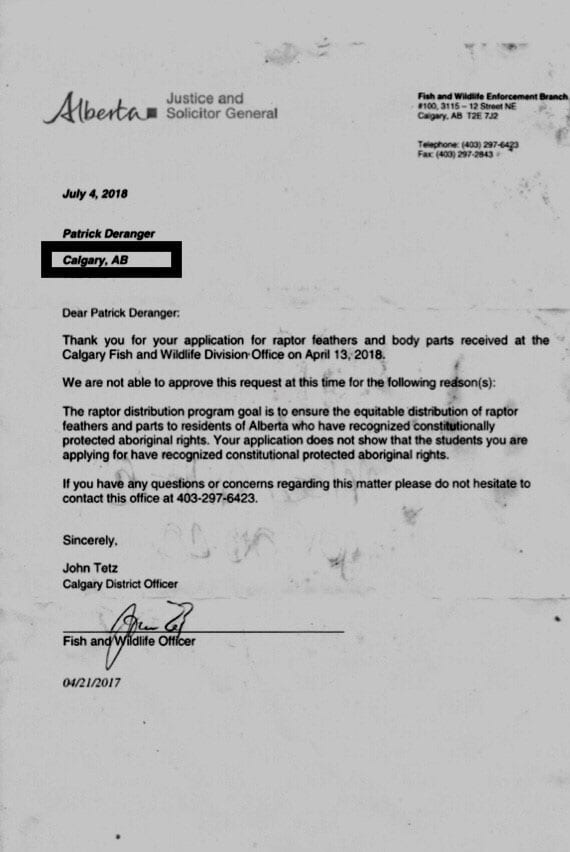 APTN News reached out to Alberta Fish and Wildlife who directed us to Alberta Environment and Parks.

No calls were returned by publication.

Both Deranger and Parenteau-English said they won’t be gifting feathers to any students until the regulation changes.