It’s a quiet snow day in Stellat’en First Nation and the sound of drumming and singing can be heard throughout the community.

The rhythm, and voices, are coming from an event at the nation’s year old health and wellness centre.

“I wanted this so bad for our people of Stellat’en,” says Cynthia Munger, community health representative for the nation.

She says the benefits agreement her chief signed with TransCanada to build a natural gas pipeline through approximately 30 kilometres of their territory is a good thing.

Stellat’en First Nation is a remote community in northern B.C. with 600 members. Only half live on the reserve.

“My objectives are simple and that’s why I am here for seven years,” says Archie Patrick the elected chief. “Just had my third election as chief and I got 90 per cent support from my membership so they like what I am doing. 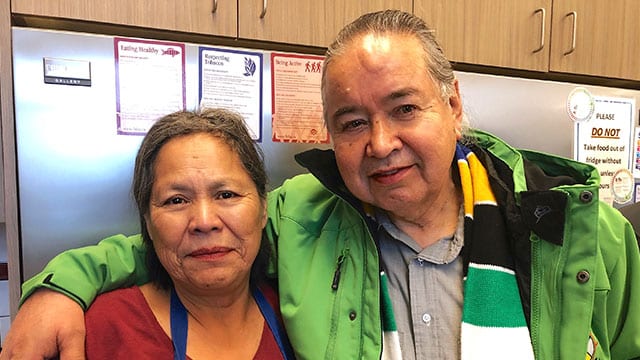 Patrick says he didn’t take signing the pipeline deal with the company lightly. He spent five years in consultations.

He says the money from the pipeline will be used wisely.

“We will invest it, we will try to start economic development in the territory, probably provide services and there is the whole question of tourism which we haven’t explored at all,” he says.

The New Coastal GasLink pipeline will be the second pipeline to run through the Stellat’en lands.

The community’s experience with the first pipeline helped give the ok for the second.

“There is a pipeline through our territory just over the mountain here, it was put in 30 years ago.  It is overgrown, nothing has ever happened to it and likely that is going to happen,” says Patrick.

“It will be disruption for a year or so, but after that it is going to be back to normal basically.”

Although Patrick is looking forward to pipeline construction – he says he isn’t happy with how the Wet’suwet’en people who are against the project were treated and removed from their territory.

“It was destroyed because of colonialism so these people are bringing it back up so I applaud them for that.

14 thoughts on “Stellat’en First Nation in B.C. feeling the benefits of signing with the CGL pipeline”