Sioux Lookout, about 400 km north of Thunder Bay, is a service hub for dozens of First Nations.

“And so there’s been now a migration of people from the north and then people brought out for justice reasons and health care reasons,” said Lawrance. “And many of those people who end up here on the streets are here with mental health, addictions issues.”

And help for mental health and addictions isn’t close by.

When Shannon Turtle decided it was time to go to treatment for her drug and alcohol addictions, she had to leave Sioux Lookout.

It’s where she had become familiar with the streets.

“We would always hang around downtown and I guess they say chip in for a bottle like anybody that had money you better come with me or come with us,” she said.

It’s been 15 years since Turtle went to treatment and while she may no longer be using, the addictions problem in Sioux Lookout hasn’t gone away.

There’s about 6,000 people living in Sioux Lookout – and about half are First Nations.

To the north are 49 communities from Treaties 5 and 9 – also known as Nishnawbe Aski Nation.

In the summer, the area is a popular tourist destination for Americans.

But Lawrance says the town’s economy is 70 per cent based on serving First Nations.

“So if you’re a teacher there’s probably 6 or 7 chances in 10 you’re here because northern First Nations students are here either at Pelican Falls High School, the local public board high school or at the various training centres.

“If you’re in health care it’s probably because 85 per cent of the people that go through the Menoyawin Health Centre are Indigenous coming from the north,” he said. 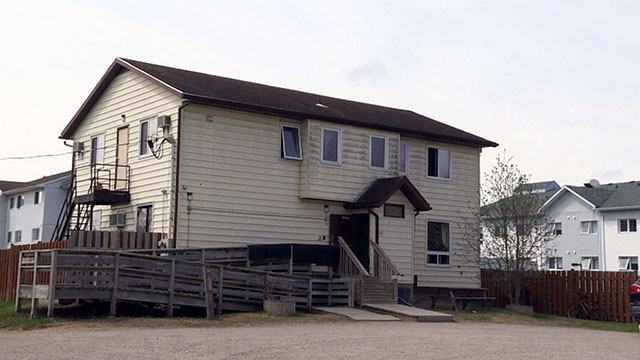 Like many families in the north, Shannon Turtle’s mom relocated her family to Sioux Lookout to continue her education when she was in grade 10.

But before long, Turtle was getting into trouble and was in and out of jail until she was about 20.

“There was more things happening I guess in my life at the time where I didn`t deal with anything,” she said about her struggles.

In a media release in May, the mayor said the town’s crisis is a “direct and consequential result of colonialism and historic trauma.”

“I think there’s a lot of history, complex history there that involves many things,” he told APTN.

The Anglican church operated Pelican Falls Indian residential school about 10 km from town before closing in the 70s.

It’s now a high school for First Nations students from the north.

Lawrance said the intergenerational trauma from government policies like residential schools is undeniable here and visible on the streets.

Susan Barclay sees it every day at the emergency shelter.

She says 680 people came through their doors last year.

“Not all the folks that you might see downtown are using the shelter, many of them are not, many of them have their own place to live whether it’s here or possibly close by,” she said.

“Some people are at the hostel because they’re here for medical and they wander downtown and they hang out with their friends and then they go back.”

Tenants pay rent and have access to local supports and services.

The mayor says within months, calls for service to police went down 60 per cent.

“We need transitional housing, something where people can go who aren’t quite ready to go into supportive housing but with more supports even.”

The closest detox and treatment centres are in Kenora and Thunder Bay, both hundreds of kilometers away.

Another major barrier for people looking for help from Sioux Lookout and the north, said Barclay.

“If people are seriously looking to make a change, they can’t even consider any kind of a treatment program moving forward unless they’ve done the detox,” she said. “You have to phone every day to check on the bed situation and the closest one that we’ve been able to get to say, yes we have a bed was Sault Ste. Marie but there’s another big barrier because most of our folks don’t have IDs and can’t fly.”

Turtle said she tries to encourage those who are struggling and facing barriers.

“They would say like, how do I do this, I live on the rez, it’s so hard for me to do anything up here,” she said.

“And I would tell them, well there’s the Internet now, we can phone places now, we can get support outside too somehow.”

“Those services though have to be consistent and sustainable. It can’t be somebody popping in to do a program or workshop and then popping back out. You need to have health and mental health services in the community,” she said.

The mayor said a four-party task force with a commitment from municipal, provincial, federal governments and area First Nations can create a path out of their crisis.

“So instead of recycling people through criminalizing behaviour which is mental health, addictions related, instead of criminalizing that behaviour lets triage them and say, alright what would best serve this person,” said Lawrance.

“Get them out of that system and into something that gives them a chance to succeed. Whether it’s help with their addiction, mental health help, with training, with housing, with supports.”

The mental health and addictions program at the local health centre is limited to outpatient and counselling services.

“We need a detox centre, we don’t have a detox here,” Lawrance said.

“We need a fully resourced emergency shelter. We right now have, basically it’s a large old house and there’s rooms for 20 mats on the floor, people are sleeping on mats on the floor wall to wall.”

Turtle, a mother of four children, recently graduated with a nursing degree and is preparing to write her nursing exam.

She’s working in Thunder Bay and using her experiences to help clients.

“Just by listening to them, they’re releasing something to you,” she said.

But she says addiction is forever.

“I`m still trying to find myself and realizing that there is positive things out there and for you to just to go out and do it it`s not that simple I know but to just continue to keep asking for help or talking to others.”