The ribbon skirt workshop at the Odawa Native Friendship Centre in Ottawa is filled with colorful ribbons, yards of material, the whirring sounds of sewing machines, and laughter.

People are scattered around the room sewing, some for the first time.

Colleen Paxton is a volunteer at the friendship centre and is helping people make their own ribbons skirts.

“People can express their individuality through their skirts and feel part of the community,” says Paxton.

Some touch the ground, and some have slits up the sides.

“As far as I’m concerned, your ribbon skirt is your personality, if you want two ribbons on it, you put two, if you want six, you go ahead and put on six,” says Paxton.

She pointed out that each person in the workshop has a different style of skirt. She advises to ask the grandmother who is facilitating the ceremony what type of skirt is appropriate.

“You listen to them respectfully and then you make your skirt how you feel comfortable with it and then knowing you are going to go that ceremony with that skirt,” says Paxton. 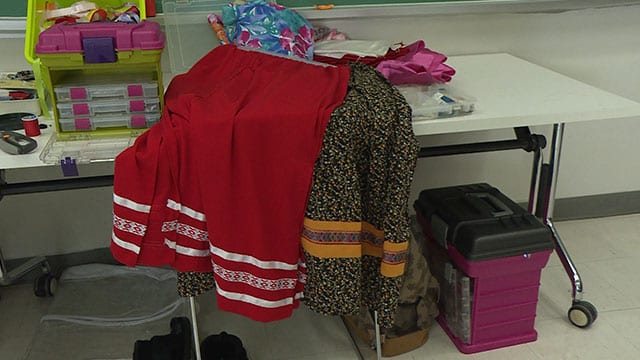 Ribbon skirts are worn by woman at ceremonies, and honour women and teachings. They are long to connect with mother earth, so she would know who was touching her.

Barbara O’Neil says she comes to the friendship centre because it’s a place of healing and therapy.

The workshop provides a space to make skirts, moccasins, and regalia to participate in ceremonies.

“We have to have a skirt for our ceremonies and especially for the drumming for the women we make contact with mother earth as well and that’s the reason for the long skirt,” says O’Neil.

She is also learning so she can teach her children.

“I have eight grandchildren which I learn this stuff and teach back to them and that’s my duty.”

Jaime Morse came to the friendship centre a few years ago when she moved from Alberta.

She says you can walk into any centre and see a friendly face and learn from other communities.

“It’s helped me to connect with my community and even to help share what I know as a Metis person from out west with Ottawa folks,” says Morse.

Tahltan Nation in B.C. encouraging members to hunt bears a...