The residence of the homes were served eviction notices earlier in May after band council received complaints from community members over the last few years.

“The authorities tell us you need to build a case, so you need to have around 150 calls about a certain home,” says Sagkeeng Chief Derrick Henderson.

APTN News reached out to RCMP for confirmation, but didn’t receive a response by the time this story was published.

Demolition of the first home took place Tuesday, while the second house faced the tear down Wednesday.

Video of one of two houses in Sagkeeng First Nation that was demolished after the occupants were evicted for dealing drugs.

Henderson says when the homes were evacuated, proper authorities investigated and found evidence of drugs in both homes.

Chief and Council agreed the homes wouldn’t be safe for anyone to live in.

“I don’t think it’s advisable to renovate the homes and put a family in there, it’d jeopardize their lives,” says Henderson.

Henderson says the homeowners approached band council to have the occupants removed and the houses demolished.

The band council discussed this plan with Elders in the community earlier in May and gave the council their full support. 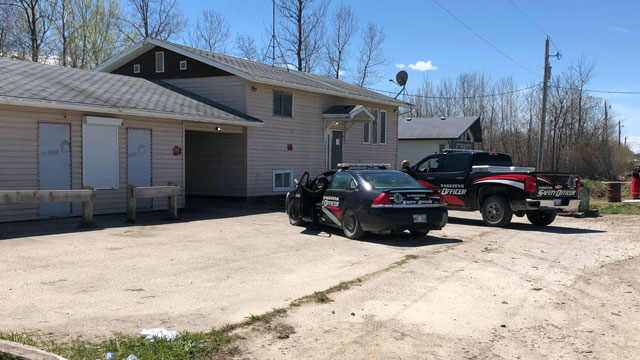 (Police outside a drug house on the Sagkeeng First Nation. Photo: Ashley Brandson/APTN)

Henderson confirms a couple that were living in one of the homes relocated to Winnipeg.

As for the residents that were living in the other home, Henderson says he’s unsure where they relocated.

When it comes to other communities that are dealing with this issue, Henderson says it’s up to the leadership.

“I leave it up to each community.  We’re here in Sagkeeng, and this is what the community wanted.  We listened and took action.”