The failed search for Amber Tuccaro “was not our best work,” Alberta RCMP said Thursday in apologizing for mishandling the missing persons case that remains an unsolved murder.

“On behalf of the RCMP, I am truly sorry,” said RCMP Deputy Commissioner Curtis Zablocki.

“Amber was a beloved member of your family and of the community.”

The public apology, broadcast live from Edmonton, was the latest development in a crime that saw the 20-year-old vanish from Nisku, Alta., in August, 2010.

At the time, she was living in Fort McMurray with her mother but flew to Edmonton with her 14-month-old son Jacob and a female acquaintance.

When Vivian Tuccaro couldn’t reach her daughter she knew right away something was wrong.

But it took four months for an RCMP officer to interview her.

“When Amber first went missing I was calling Leduc police every day, like sometimes five time a day, because people were giving me tips,” said an emotional Vivian, who broke down in tears.

“And all along they hadn’t even done any work until November.”

That was only the first in a series of missteps.

Leduc officers removed Amber’s name from the missing persons’ list for a month, and threw away her suitcase.

In 2018, police released an audio clip of a man’s voice in connection with the case.

They believe he was giving her a ride and say identifying him is crucial.

Vivian said she only learned about those mistakes from someone inside the detachment and used the information to file a complaint to the Civilian Review and Complaints Commission (CRCC). 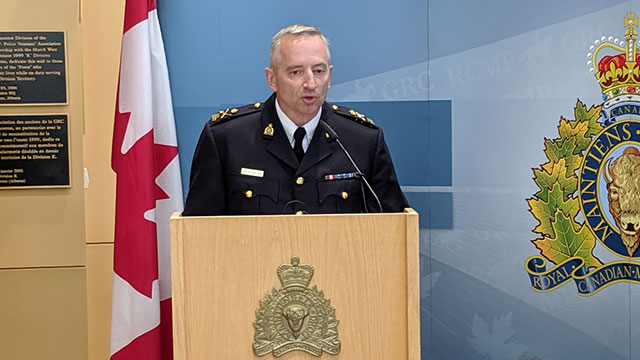 Zablocki agreed his members should have done better.

“I fully acknowledge that in the early days of our investigation into Amber’s disappearance that it required a better sense of urgency and care,” he told the news conference.

“We agree with the Civilian Review and Complaints Commission that in 2010 our Leduc detachment initial missing person investigation was not our best work.”

More than two years later, in September 2012, Amber’s remains were found on a rural property near Leduc County on the outskirts of Edmonton.

No arrests have been made.

LISTEN TO THE VOICE HERE.

The family said right from the start the police didn’t take the case seriously. They repeated their story to the National Inquiry into Missing and Murdered Indigenous Women and Girls (MMIWG).

The CRCC agreed with them in September 2018, and recommended the force apologize.

Vivian said it was an important day for her family.

She said it would help them cope with the loss and make improvements for other families suffering through the same thing.

“I hope that I helped families today. Even one family – that I can give them the strength to come forward and not give up.”

Zablocki said the case has become “a real catalyst” for change, sparking regional and national improvements.

Vivian, accompanied by her son Paul, unveiled a new poster about Amber’s disappearance.

She said the family is still anxious for clues to break the case.

“For the people that know who the killer is you have blood on your hands, too,” she said.

“I don’t know how you could sleep at night, live with yourself, knowing what you know.”

The inquiry, which submitted its final report on June 3, was unable to determine how many mmiwg there are in Canada.