A Canadian press freedom advocate says the RCMP’s denial of media access to an important story in B.C. Monday is both “frightening” and “chilling”.

Police blocked an access road outside Houston, B.C. Monday in preparation to enforce a court injunction against camps set up by members of the Unist’ot’en house and Gidimt’en clan of the Wet’suwet’en Nation who were resisting an LNG pipeline slated to run through their unceded territory.

Media who were not already on the other side of the police road block, including APTN News and a CBC TV crew from Vancouver, were turned away.

“It sounds like the RCMP is once again using every tactic that they can to bend the law as much as possible to prevent journalists from gaining access to sites,” says Tom Henheffer, vice president of Canadian Journalists for Free Expression (CJFE).

“This is a tactic that is very commonly employed and is very difficult to fight against in the moment because [police] know that when you’ve got a bunch of officers with guns telling people what they can and cannot do, it doesn’t necessarily matter whether the law is on the RCMP’s side or not — because it takes too long for a journalist to get a lawyer, go to court to get an order to allow them to get on to the site.”

APTN News was told by an officer they were barred because of safety concerns during the police operation and could be arrested and charged with obstruction if they tried to pass the checkpoint to do their jobs.

APTN observed that while reporters were barred, company workers were allowed to pass through the checkpoint.

Not long after a convoy of RCMP vehicles carrying members of the tactical and paramilitary arms arrived at the remote site around 10 a.m., the social media feeds of journalists at the Gidimt’en camp went silent.

“RCMP told me communications have ‘been cut’ in the [Unist’ot’en Camp] area and blame a satellite issue, denying RCMP had anything to do with it.”

The Twitter feeds of CBC reporter Chantelle Bellrichard also went silent. As did that of Sawyer Bogdan, a reporter with local radio station The Moose. 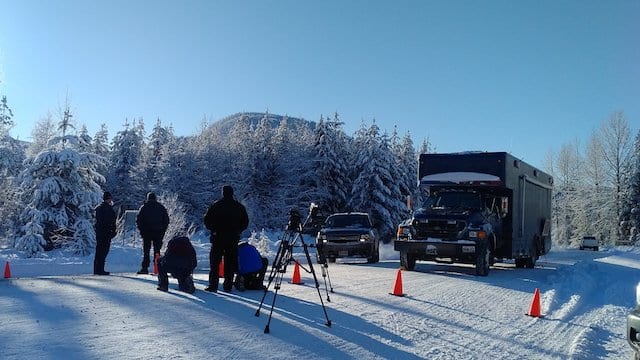 The RCMP said they had nothing to do with the disruption of communication from inside the Gidimt’en camp at the same time as they were raiding it. Photo: Kathleen Martens/APTN.

In a statement released Monday evening an RCMP spokesperson said the police had nothing to do with the sudden, timely disruption of communications.

“The area is extremely remote and even police had limited access to communication,” writes Cpl. Madonna Sanderson of “E” Division Communication Services.

Miles Howe, a former journalist who covered the RCMP’s 2013 raid of Mi’kmaq land defenders at Elsipogtog and now studies police tactics used against Indigenous protests says by prohibiting reporters from accessing the site, the RCMP get to gain more control over the public narrative while removing Indigenous people from their lands in order to facilitate resource extraction.

“Limiting press access to a site where the enforcement of an injunction is about to go down restricts any possible counter-narrative other than the one that the police will inevitably present,” Howe said.

“There’s nothing risky about an independent and free media in Canada. In fact, the risk in my opinion presents itself when the opposite happens.”

On Monday Public Safety said it would not be commenting on the RCMP’s media exclusion zone because it is an “operational matter”.