A First Nation Elder says you can make a salad with wild plants growing in your backyard if you know what to look for.
“Pigweed is more nutritious than kale,” said David Daniels, who hosted a medicine-picking tour on Manitoba’s Long Plain First Nation last month.
“But some plants will kill you.”
David is an uncle of Jerry Daniels, grand chief of the Southern Chiefs’ Organization.
SCO has more tours scheduled in Manitoba this summer to share the medicinal and nutritional value of native plants.
Medicines picked during the tours will be gifted to visitors at the upcoming Anishinaabe Nation Gathering – a huge celebration SCO is holding in August.
Jerry Daniels accompanied the group – many of whom wore traditional ribbon skirts and shirts — donned in elaborately beaded medicine-picking regalia.
“My grandfather was a medicine man and he wore an outfit like this many years ago,” he said.
“We’re hoping to pass that on so that more of us are collectively aware of the land and its impact on our life.” 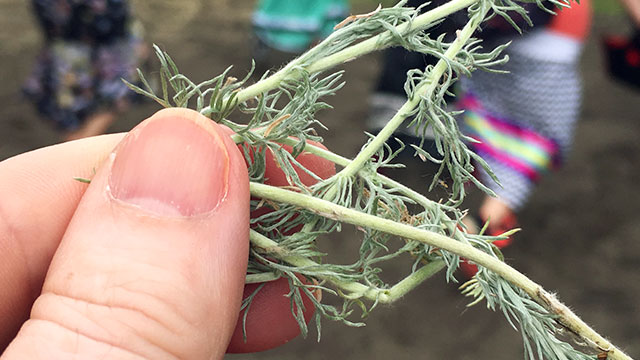 There are two types of sage – female (pictured) and male – used in sacred medicine. (Kathleen Martens/APTN)

Over the course of two hours, David talked about the traditional value of the trees, bushes and plants that grow all around us.
Some of which are used in traditional Indigenous ceremonies.
He also pointed out what can help and what can hurt, emphasizing the difference between what is original and what isn’t.
“Plantain is an import,” he said of what many consider a common weed.
“It makes a nice tea for healing and helps with bug bites.”
He said lamb’s quarters hails from the goosefoot family, which includes quinoa, spinach, beets and Swiss chard.
“Have a taste,” he said, handing out pieces of greenery under the hot sun. “It tastes like spinach.”
Berry bushes and ground-covering plants can heal, nourish and cleanse us, added David, who grew up and still lives on Long Plain First Nation.
“Rose hips you can eat right from the bush and it actually tastes good,” he said, noting rhubarb shampoo is great for hair.
“And rhubarb pie,” he added. 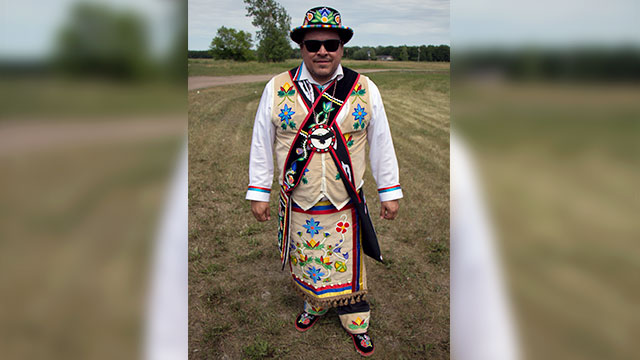 The nature walk, which weaved along gravel roads and through thick bush towards the Assiniboine River, saw the elder pointing out poison ivy along the way.
David said he brews a special tea to combat its itchy effects. And, he showed us how to spread the creamy centre of the milkweed plant on unsightly moles.
“Take the yarrow plant,” he said, stopping to point out the tall bush common along roadways.
In the Trojan War, hero “Achilles advised soldiers to apply this plant to stop the bleeding” of their wounds, he said.
“Pass that along and have a sniff.”
Rheane Brandon loved the knowledge David shared on the tour.
“I came out here to learn our traditional medicine,” she said later.
“It is important for our kids to learn because many of our remedies have been lost.” 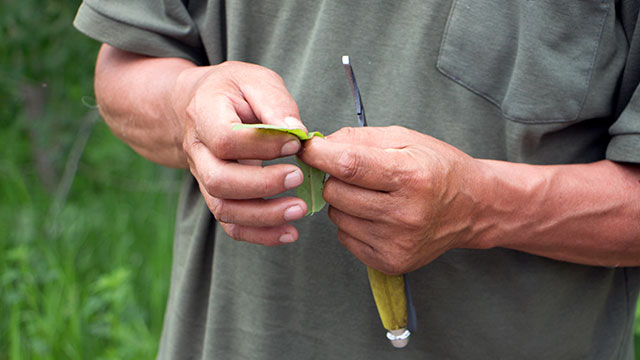 But some plants were still kept a secret.
More than once we watched as the elder and junior Daniels disappeared into the bush and reappeared with a root or a bloom – and an interesting anecdote.
“This heals sores that don’t heal,” was the only hint we got.
That’s why they call elders the ‘knowledge-keepers’, noted Jerry.
“People need to understand that that relationship is a very significant and deep relationship that’s developed over time…
“And you can actually hear the land speak to you.”