A human rights group says the Ontario government and its provincial police force have resisted freedom of information (FOI) requests involving a Mohawk land dispute in 2008.

“We’ve met with roadblock after roadblock,” said Amnesty International Canada’s Craig Benjamin. “We would not expect to see this degree of resistance in a country that takes pride in the rule of law.”

Stan Jolly has spent the last decade battling the OPP and Ontario’s Ministry of Community Safety and Correctional Services for access to information.

“Our experience is one of delay, bad faith and obstruction,” he said.

Jolly is a retired senior policy adviser for the Attorney General’s office in Ontario – a career largely focused on Indigenous justice.

“In a sense it’s a challenge to my whole career,” said Jolly. “I didn’t realize that there was so little sense of accountability among the Ontario Provincial Police members. And the senior echelons of the OPP.”

Stacks of documents teeter on Jolly’s desk in a crowded office in his Toronto home. They represent 10 years of filing FOI requests. And when information was redacted or denied he filed lengthy appeals.

“There’s an expectation and a strategy that, well, if we just drag this out they will go away,” said Jolly. “And I’ve said to myself and to my wife, nobody who’s perfectly sane would stay in this process.”

Amnesty International’s initial concerns about police behavior in 2008 came from contacts in the Tyendinaga community. As the human rights group began investigating, a picture emerged of a massive police response to Mohawk protests.

More than 200 officers were deployed. The Public Order unit. The Crime team. The Tactics and Rescue Team, or TRU, commonly called the sniper squad, was on standby.

And the freedom of information disclosures Jolly has received have uncovered police video recordings, briefing books, officers’ notes, and OPP videos of the Mohawks kept in nylon restraints, or zip-ties, for up to 13 hours while in police cells.

Amnesty is pushing for police accountability and an apology to the Mohawk people involved.

“If you can’t apologize for something that’s so blatantly wrong like this, is there any real hope for reconciliation?” asks Jolly.

Benjamin adds that the OPP’s reluctance to release information about what happened in 2008 is why this is still an issue in 2018.

“For the OPP to say, well, this happened 10 years, you can’t expect us to re-examine it, they’re the ones that blocked the release of evidence for years. They really should not now be saying it’s too late,” said Benjamin.

“That’s simply rewarding them for having obstructed the spirit and intent of the freedom of information act and for refusing to collaborate in an effort to bring transparency and accountability to their actions.”

Dan Doreen is a Mohawk land defender who was arrested during the protests in 2008.

“I thank Stan Jolly and Amnesty International for all the work they’ve done and they’ve worked hard at this,” said Doreen. “But nothing’s changed.”

Doreen and Amnesty International said the OPP handled the land dispute in 2008 poorly; that there was police misconduct, bias against the Mohawks and human rights abuses when the Mohawk were left zip-tied in cells.

“My cynicism is much closer to that of the men and women I’ve been working with at Tyendinaga,” said Jolly. ”Who right from the very beginning said, ‘it’s not going to go anywhere, Stan. You’re not going to be able to change the OPP. They’re never going to admit that they did anything wrong.’” 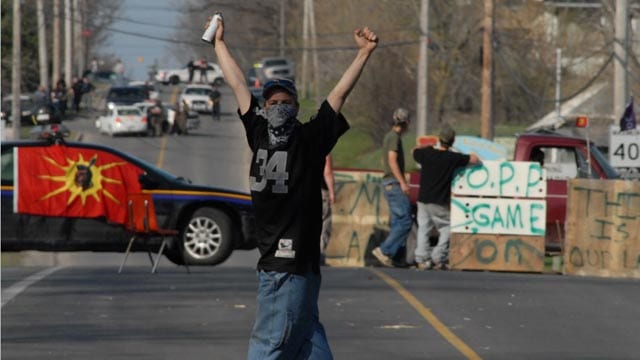 The fight for information has been a disheartening journey for Jolly.

“I’ve lost faith in some of the fundamental institutions in our society,” he said. “It’s a further crisis of confidence for me as a researcher and as a citizen about the police.”

The IPC agreed that the human rights groups raises important issues and a review is underway but is expected to take months.

APTN Investigates requested interviews with the Ministry of Community Safety and Corrections Services.

Spokesman Brett Weltman wrote, “Due to the issue having occurred under the previous government, our Director of Communications believes your questions regarding this matter would be best directed towards the OPP.”

APTN requested an interview with the OPP and was declined.