Officials with the department of Environment and Natural resources (ENR) are continuing their investigation into the slaughter of nearly 100 caribou that belonged to the endangered Bathurst herd.

“This behaviour is not only disrespectful—it is illegal,” said a joint statement by Indigenous and territorial leaders and posted on the ENR website.

“ENR will continue to actively monitor the Mobile Zone through daily air and ground patrols and enforce the no-hunting rule to protect the Bathurst caribou herd.”

Over a two week period, wildlife officials discovered that more than 80 Bathurst caribou were killed inside a no-hunting zone. On top of that, wasted meat and parts from 12 caribou were also discovered outside the zone.

This particular herd has become increasingly vulnerable in the last decade.

Between 2012 and 2015, the Bathurst herd population had shrunk in half.

A “mobile zone” was put in place in 2015 to protect the herd. In the fall of 2018, the territorial government estimated only 8,200 caribou in that herd remained. The herd has declined by 98 per cent since 1986, according to the ENR.

It’s one of nine barren-ground caribou herds and its range spans across the eastern N.W.T. with its calving grounds near the Bathurst Inlet, Nunavut.

The area rests on traditional hunting areas for the Tłı̨chǫ, Akaitcho, and Sahtu Dene.

Officers from the ENR will seize meat and issue tickets to any hunters caught harvesting an animal inside this zone.

“Prior to Mar. 21, there had only been one case of harvesting in the mobile zone this winter,” said the release.

Lee Mandeville, a wildlife officer in the North Slave region said staff in his department have had boots on the ground, often pulling long 12 hour days to monitor the mobile zone using air and ground patrols.

“I’ve never seen it so busy. It can be stressful at times on officers. There are so many people on the land, a huge influx of hunters, people are in hoarding mode harvesting a little extra,” he said.

Once a week ENR will receive a snapshot from the satellite callers from the herd showing where the caribou are. They will use that data and build maps with it.

The maps are distributed on social media, the ENR website and co-management partner locations such as band offices.

At Gordan Lake station, a two hour drive north along the ice road, wildlife staff distribute print outs on rules, regulations and an up-to-date map of the management zone.

There are signs posted where the zone begins and ends and harvesters can even request to have a map uploaded straight to their GPS.

Anyone caught hunting in the zone can be fined or face jail. Outside of the zone, Mandeville noted the main infraction he has seen is wastage of “prescribed parts,” of a caribou including neck, brisket, ribs, quarters, back strap, tenderloins and rump.

“Last week, I saw animals buried in the ground. It was pretty sad to see. Some hunters will just take the quarters, a large portion of the meat. Sometimes they will just overshoot… I will see an animal limping around because hunters are just shooting into the herd,” Mandeville said.

Elders often phone him to provide information on wildlife infractions, clarify on rules or simply ask how the caribou numbers are.

As enforcement to protect those numbers continues, Mandeville suggested that hunters look at other options to harvest wild meat and work towards revamping the caribou population.

“The way it looks right now there is next to no caribou left. I fly around and see little pockets of five or ten, maybe 100 will be together which is really small compared to when I was a kid where I would see 20 kilometres of straight animals a whole herd moving,” he said.

Mandeville told APTN News that he and his family decided to stop harvesting caribou almost 15 years ago when they noticed numbers slipping – and now look for moose and fish.

He also said how conservation is easier when wildlife officers work well with communities.

North Slave Indigenous leaders and the territorial government are calling the slaughter disrespectful and disappointing.

“I remember way back in the day on the winter road hunters would go in march just before the ice road closed. They went hunting on their own, no trailer just small skidoo, with 45 gallon drum and gas stove. They had no subsidy they did it all on their own just to bring eat to their family. Maybe that’s the way we should go back. Right now we are subsidizing the hunt and it is too much,” he said. 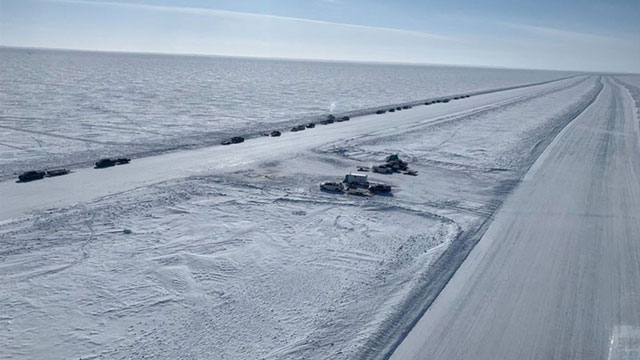 It allows hunters greater access to the caribou grounds – and allows them to take more because they have a vehicle rather than a snowmobile.

Mackenzie said that he has had discussions about restricting access for hunting on the winter road even outside of the caribou management zone.

“If they do that they have to work harder to get the caribou like the way it was done with dog teams, people went across country,” `Mackenzie said.

While the damage is done with the deaths of the 80 plus Bathurst caribou, the winter road to the mines are now closed.