But that was before he heard about the protest planned to be held outside his house.

“I woke up to the neighbour hanging ‘marry out, get out’ signs on the telephone pole at five this morning,” said McComber. “Shortly after I noticed that my house and car was spray painted.”

Written on the side of the house in barely legible  red letters is what looks to be the word “frog”, a derogatory term used to describe a person of Quebecois descent.

Asked why someone would spray paint her car, McComber’s daughter Mariah, 18, said “It’s just because my mom is white, and they don’t want her here.”

McComber’s wife Terri is not Indigenous, so according to Kahnawake’s membership law, the McComber’s are not allowed to live in Kahnawake, even though McComber and their three children are all Mohawk.

The law also states that people cannot be evicted between Nov. 1 and May 1, which has led a grassroots organization in Kahnawake to declare May 1st to be “Moving Day” for non-Indigenous people living in the community. 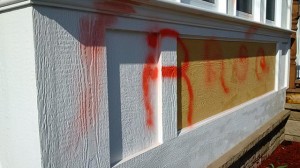 With that deadline now passed, McComber knew he was in for a hectic morning. At around 10 a.m., a group of about 40 protesters walked down the street and stopped in front of the McComber house.

Carrying placards, they set up across the street.

“We’re here to peacefully protest against trespassing in the community against our Mohawk laws,” said protester Ohontsakate Montour.

Montour condemns the vandalism that occurred the night before, but says the protest is necessary.

“We’re here to show that we’re not going anywhere and we think that these people are here against the wishes of the community, against the majority, and we’re just here to voice our concerns,” he said.

Also taking part in the march were three Mohawk Council of Kahnawake (MCK) chiefs. Chief Carl Horn said that the law was put in place for the good of the community and to protect Mohawk lineage for generations to come.“We might end up as a municipality. I wanna make sure Kahnawake stays Mohawk land forever,” said Horn. 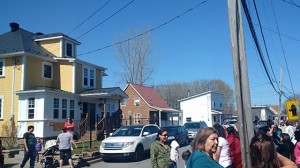 McComber was irked to see council members taking part in the protest, despite its peaceful nature.

“It’s still intimidating, regardless if they’re saying or doing anything,” said McComber.

Asked for a comment about chiefs being in the protest, MCK press attaché Joe Delaronde said it’s their right to be there.

“There’s no doubt that the (membership) law is the law, and in any society if you have a law you have the right to express that you support that law…unless you don’t,” said Delaronde. 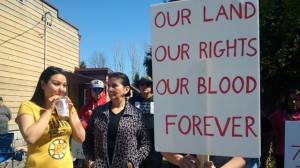 “I grew up with Marvin,” said Timmy Montour whose brother-in-law was protesting 30 metres away.“Me being here today is going to cause problems for me later on, but I choose to be here because it’s (evictions) wrong. Anytime you’re hurting somebody, you’re doing something wrong.”The McComber’s are being targeted for other reasons are well said protester Ohontsakate Montour .

“The person who is illegally living here (Terri and Marvin McComber) is also in a lawsuit against the community that threatens our rights to self-governance, and threatens to take community funds from all aspects of the community,” said Montour.

The lawsuit has 16 claimants, and was filed against the MCK this past fall.

It claims that the council is infringing on basic human rights by asking non-Indigenous people to leave.

McComber feels he was left with no alternative but to battle what he sees as an unjust law in Canadian court.

“We just want there to be some point of peaceful resolution. My wife ain’t taking anything, she’s not from here, she can’t own anything. Land can’t get transferred to her even if I did pass away,” he said.
The lawsuit isn’t expected to be settled in court anytime soon.