Walter David stands on his toes before pouring a large bag of green raw coffee beans into the top of his coffee roasting oven.

A big reason why it’s so popular is because David is meticulous.

(Walter David in his shop in Kanesatake Mohawk Territory)

He lords over the freshly roasted coffee as it cools at the bottom, looking for any imperfection in the beans as a metal blade turns them over.

“These are off beans,” he says, showing off a small handful he’s removed from the latest batch. “And a lot of times, these are unripe or bug infested sometimes at origin, so they have to be separated otherwise it ends up in a cup (of coffee.)”

Coffee isn’t the only thing David is meticulous with.

As a Mohawk, he’s adamant about defending his rights.

He recently dumped his insurance company of 30 years because they insisted on charging him Quebec taxes, even though his home and business are in Kanesatake Mohawk territory.

“They wanted us to pay for it, and then get reimbursed by the government,” says David. “No, the principle here is you insulted us, and that’s it. You insulted us by saying we don’t exist.”

David says the insurance company told him that Kanesatake is too much of a patchwork reserve to verify his claims of living there.

The insurance company declined a request from APTN News for comment.

David says his dispute over taxes with the company is not recorded anywhere.

“We asked for proof, we asked for it written, she refused to give anything written to us,” says David. 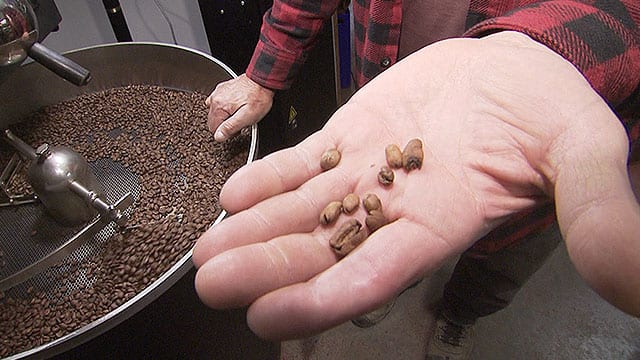 Grand Chief Serge Simon confirms that David lives and works within the 12 square kilometres that the federal government recognizes as reserve land – although Kanesatake’s unceded territory is hundreds of times that.

Still, Simon emphasizes that by Quebec and Canada’s own rules, David is within his rights.

Quebec’s own tax laws clearly state that provincial sales tax does not apply to services rendered on reserve to a status Indian.

“He has certain inalienable rights, and he can’t have that taken away from him,” says Simon. “If I allow this to happen to him, I allow it to happen to the rest of us, so it’s within our collective interests to do something about that.”

The Mohawk council says they will intervene on behalf of David and anybody else who has their non-taxable status threatened.

And there are potential avenues when it comes to David’s case.

Because insurance is regulated, every province and territory in Canada has an ombudsman that will investigate complaints.

David said for him it’s not about the money, but standing up for his rights as a Mohawk.

“I think everybody here needs to get together on this whole issue,” concluded David.

In the meantime David will keep roasting his coffee.

He might just need to be more cautious than usual…Moccasin Joe is currently operating without insurance.