Bridget Stevens started boxing when she was 11 years old.

She now owns her own boxing club.

“When things are tough I use boxing as an escape with life,” says Stevens. “So I use the hardship to get myself tired so let’s just say the harder the times I’m having, the more I’m studying to become a better trainer, a better teacher, better fighter.”

She says here training is based in Mi’kmaq traditions and teachings.

No one can say for sure, but to Holly Mcdonald, learning Indigenous traditions has helped her in and out of the ring.

“Well at the sweat lodges I’ve been to probably about four or five now, and I find they toughen you up a lot,” says McDonald.

“They are just really uplifting when you come out of there.” 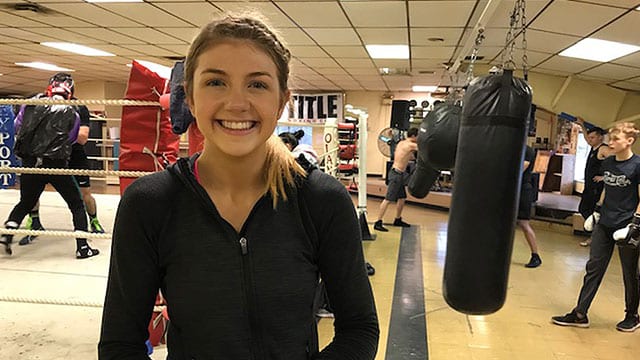 Stevens says a traditional prayer is said before a boxer goes into the ring.

She prays they will fight in good strength and their spirit will be protected.

“Because as a trainer, as a coach, as a mother, it’s really harder on me when my kids go into the ring than them,” she says.

“I get nervous, my belly aches just like a mother.”

He says Stevens made him a better boxer.

“She’s great, when you’re feeling down and stuff, she’ll pick you up, she’ll motivate you a lot, she’s like a role model to me,” he says.

Steven says there are more and more female boxers in the ring.

”In this sport and the era I came from, boxing was just coming out with women so I have to work twice as hard being a woman but I have to work ten times harder being an Aboriginal woman to being able to get that respect right,” she says.

Renae Cowel started boxing when she was nine years old,

Stevens inspired her to go to the championships.

“You see like all these men that are you know acting big and how they are kind of cocky and then you see Bridget who’s like a female and she’s better than the guys,” she says.

“Like pretty much, she’s the best in this gym.”

Boxing is more than muscle; it is being your personal best.

“It is the best feeling there is,” she says. “I’m happy, I got them in the right spot, good mindsets, good hearts, to me they’re champions no matter what.“